PLAGUE OF GIANT MOTHS IN SCOTLAND 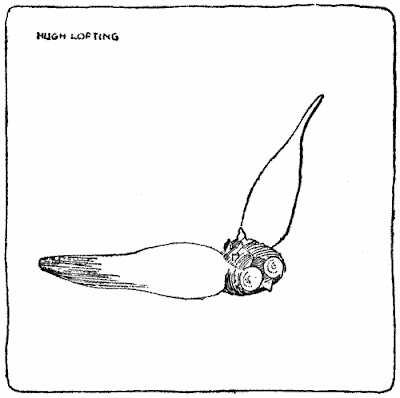 I know that this headline is a little misleading; it conjurs up images of enormous moths straight out of the pages of one of Doctor Dolittle's lunar adventures, but the truth is - sadly - a treensy weensy bit more prosaic (though still exciting to a dyed-in-the-wool lepidopterist like yours truly).

Nigel Wright, who has been a mainstay of my existence for many years, sent us this remarkable story about a plague of a Russian lasiocampid known as the pine lappet in Scottish forests.

Until now this species was a real rarity in the UK, but I think that the Scottish Forestry Commission are not celebrating this addition to their biodiversity...

On this day in 1964 Jack Ruby was found guilty of the murder of Lee Harvey Oswald, the presumed assassin of American president John F. Kennedy, an act which deprived the American people of a trial for Oswald which may have cleared up a number of the conspiracy theories surrounding the presidents murder (or added a metric shedload more, who knows?). 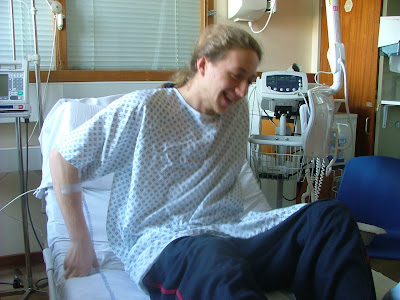 David has just telephoned me. He has had another blood test, but his untrasound scan will not be until tomorrow afternoon, and so the poor boy will be in hospital at least until tomorrow evening. Poor lad sounds bored and fed up.

So fed up that he has even asked for some CFZ work to do from his sickbed.

GRAHAM AND THE LIBRARY (in the mist) 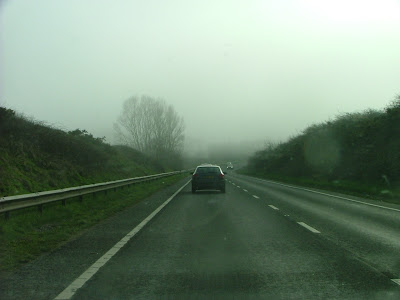 It is a great pity that I cannot bring paramilitaries of any shape, sort or form into this story, because all yesterday afternoon as we were driving around North Devon I was doing my best to work out how to get the headline 'Guerillas in the mist' onto the blog.

But for the life of me, I couldn't. (A Minor aside: If anyone can work out a credible way I can use this headline I will give them a little present) 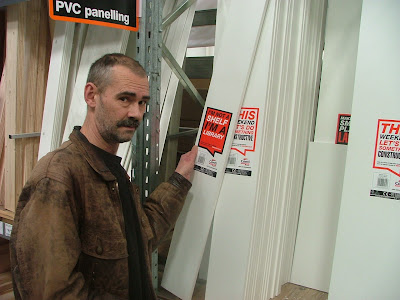 The mist continues to shroud North Devon, and it is still more than a little spooky.

Graham and I had a jolly afternoon pricing stuff up for the last bit of work on the CFZ library, and I could not resist photographing him next to a B&Q advertising slogan which seemed to be remarkably appropriate...
Posted by Jon Downes at 11:19 AM 1 comment: 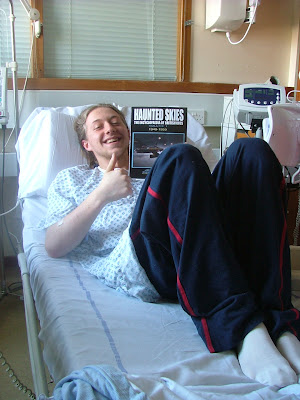 We went to visit Dave in hospital yesterday. Poor boy is quite poorly, but is in good spirits, and when we saw him was sitting up in bed reading a copy of Haunted Skies Volume One.

This is not a publicity photo for CFZ Publications, honest!

He is having an untrasound scan today, and we shall know more about what is wrong with him.

Dear Jess wrote: "Thanks for all the get well messages, he's had another set of blood tests earlier, he's also having an ultrasound sometime today. Yesterday the infection test came back which weren't very good umm so there's an infection somewhere causing Dave all this trauma but we wont know anymore until he's had today's ultrasound, I shall keep you posted. Lot's of love to you all "

I spoke to both him and his mum this morning, and will let you all know what happens next.
Posted by Jon Downes at 10:58 AM No comments:

NATURAL HISTORY: Corinna talks about tadpoles and bitterns and, indeed, other things 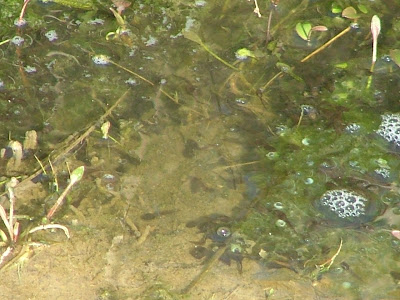 We – that is Jon, Pru and I - had left Woolsery on a bright,blue-skied, cotton-clouded, spring Sunday morning. Our mission? To visit a bird auction in Northam, visitNortham Burrows to do a spot of wader-hunting, call in at Asda to purchase someprovender, and then on to Huddisford Woods to take Pru for a walk, whilevisiting the frog spawn we had been noting for the past few weeks. We also wanted to take a look at some of thewell-used animal track-ways that we were keeping an eye on. Read on...

Update on a candidate for Unicorn stories, Submitted artwork by Tim Morris:
http://frontiersofzoology.blogspot.com/2012/03/pristichampsus-procamptoceras.html

And an article on Kappas, continuing the Freshwater Monkeys Discussion:
http://frontiersofzoology.blogspot.com/2012/03/more-on-kappas.html

New on Frontiers of Anthropology:
Reposting of a Cryptomundo article together with my notes at the end why it is relevant and important:
http://frontiers-of-anthropology.blogspot.com/2012/03/mammoth-megafauna-mammal-massacre.html
Posted by Jon Downes at 9:26 AM No comments:

One of my oldest friends is a dude called Rob Ayling. We have been friends for about a quarter of a century, during which I founded and built up the CFZ, and he started a succesful record company dealing largely with prog, psychedelic and peculiar music, including stuff by suck luminaries as Gong, Yes, Hawkwind and Rick Wakeman.

I was a music journalist long before I started writing about crypto and fortean matters, and so when Rob asked me if I could do for his empire what the CFZ Bloggo network does for the cryptozoological community, I agreed rather cheerfully. I have missed writing about music and it is nice to be back in the saddle.

There is quite a crossover between people who like the sort of music that Gonzo Multimedia, and before them Voiceprint Records put out, and the people who read these blogs, so whenever there is anything that I think may be of interest to the folk in the crypto community I shall cross post it here.

Do me a favour and check out the new blog:

And in particular part one of my look at the remarkably entertaining new concept album by Judge Smith, based on the story of 'Orpheus in the Underworld'. It is much more fun than you might think, and completely unpretentious.....

I was a music journalist long before I
Posted by Jon Downes at 12:44 AM No comments: