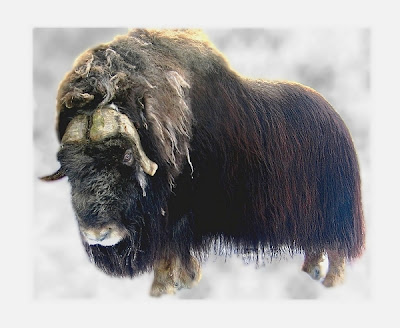 Posted by Jon Downes at 2:51 PM No comments:

Email ThisBlogThis!Share to TwitterShare to FacebookShare to Pinterest
Labels: oxen

From Nick Redfern's "There's Something in the Woods...":
Wild Men & Green Men

From CFZ Australia:
Jonathan McGowan at the Weird Weekend 2011
Yes Virginia, there are hairy men in Canberra
Posted by Andrew May at 1:23 PM No comments:

In North America a number of what have been claimed to be mummified corpses of tiny men or man-like creatures have been uncovered. The most famous became known as the Pedro Mountain Mummy and its story takes us back to Wyoming. In October 1932 Cecil Main and Frank Carr blasted a hole through the wall of a ravine in the San Pedro Mountains, about 65 miles southwest of Casper, Wyoming. They were looking for gold but what they found was even more amazing. Inside the ravine wall was a hidden cavern approximately 4 ft tall, 4 ft wide, and about 15 ft deep. On a ledge in the cavern was the body of a tiny creature mummified by age. It would have been no more than 14 inches in height and was sitting in a cross-legged position. It had strangely protuberant eyes, a low brow, thick lips and large hands. The skull seemed oddly flattened and was covered in a gelatinous substance. This seemed to be blood and brain matter, and a blow to the head had apparently killed the little creature. The tiny body weighed 7 ounces.
The little corpse was named ‘Pedro’ by Main and Carr and unlike most cryptozoological samples, was subjected to scientific scrutiny. An x-ray analysis was conducted by anthropologist Dr Henry Shapiro from the American Museum of Natural History in 1950. He concluded the mummy was not a fake and that it was a tiny adult skeleton with a fully-fused skull and a full complement of teeth. The canine teeth were very large for the size of the body. The x-rays showed that the spine and collar bone were also broken, confirming that whatever Pedro was, he had suffered a violent death. Dr Shapiro also stated that the body was that of a man some 65 years old at the time of his death.

However, these findings were challenged years later by Dr George Gill. He thought that the body could have been an infant of some unknown tribe of Indians and that the individual could be suffering from anencephaly, a cranial disorder that occurs when the head end of the neural tube fails to close. This leads to most of the skull and brain failing to develop. Anencephaly would explain Pedro’s flat-headed appearance and is protuberant eyes. Comparing the photographs of the mummy taken at the time with modern-day photographs of infants with this condition, one is struck by the remarkable similarity.

The mummy ended up on display in a drugstore in Meeteetse, Wyoming, until it was brought by Ivan T. Goodman, a wealthy businessman from Caspar. When Goodman died in 1950 the mummy was passed on to Leonard Wadler, a New York businessman. Wadler passed away in the 1980s and Pedro has not been seen since. No one knows its current whereabouts and a reward of £10,000 had been placed upon it.

Not long after Pedro was discovered a Mexican shepherd called Jos Martinez reputedly found another mummy and six separate skulls on a ranch in the same vicinity. After soon suffering a number of mishaps, however, he considered them to be cursed, so he swiftly replaced them where he had found them. If we could find to where Jos had taken these specimens, we could probably solve the riddle once and for all. However, maybe all is not lost if the following story is anything to go by.

Wyoming seems to be a Mecca for these tiny mummies. Author John Bonar saw another one that belongs to orthopaedic specialist Richard Phelps in Casper. Phelps was displaying the tiny mummified head in his shop. Bonar learnt that the head had originally been taken from a cliff near Wyoming's Muddy Gap. After Phelps's death in 1980 his daughter donated the preserved pygmy head to the University of Wyoming in Laramie, where it still rests today. I contacted the University of Wyoming to see if any analysis had been done on the Phelps head. Rick Weathermon, the Human Remains Repository Curator of the Anthropology department, was kind enough to write back to me.

'Although there was some controversy about the small item when it was first brought into the department, microscopic examination revealed that the apparently mummified head is, in fact, an expertly carved and dried piece of vegetable matter, probably a potato, or less likely, an apple. It is an interesting oddity, but is not one of the so- called "little people" from the Pedro Mountain area. There are two known and authenticated "Little People" mummies from that area of Wyoming. Both represent anencephalic infants, either fetal or newborn.'


If all this wasn’t enough, Bonar claimed that the husband of Winnie Cardell from Alcova, Wyoming, also owned another such tiny mummy - until he loaned it to a college professor, who never returned it. Who the professor was and which college he was attached to seem unknown.

Yet another mummy, one looking very like Pedro, turned up in 1979. Californian antique appraiser Kent Diehl of San Anselmo had it on loan for examination. It was just under a foot long and had supposedly been found in Central America in 1919. The creature seemed to have been killed by a blow crushing the back of its head. What he made of it is unknown and he refused to name the family to which it belonged. Presumably, it is still in their possession.

Anencephaly seems to be the answer to the mystery. It could be that something in the local environment caused a higher than normal instance of this condition. Anencephaly can be caused by toxins in the environment or by lack of folic acid in the mother’s diet. If there were such high instances of these deformed children, with a frog-like appearance, then we could speculate that the Indians involved placed some kind of importance, be it good or bad, to the events and preserved the bodies in tiny shrines. When later, unrelated tribes of Indians uncovered them, they may have given rise to the legends of a race of tiny people.
Posted by Jon Downes at 12:25 PM 1 comment:

http://hauntedskies.blogspot.com/2011/09/wilmington-journal-every-evening-7850.html
Posted by Jon Downes at 11:57 AM No comments:

On this day in 1943 Roger Waters of Pink Floyd fame was born.
And now the news:

Of course, it's all viral marketing:
http://www.youtube.com/watch?v=jd0OF2R2t0M
Posted by Jon Downes at 11:57 AM No comments:

Since we had just mentioned the dragon 'Boas' of the western Mediterranean, I thought we should also mention the dragon 'Python' of Ancient Greece. The name 'Python' (POOT'un) means 'Putrescence' or 'Rotting' and it was said to refer to the putrid body after the creature had been killed. Other interpretations of the myth suggest that the name is merely the same as 'Typhon' but rearranged. The dragon guarded the sanctuary and oracle of Delphi and was associated with another dragon, a female named Delphyne.