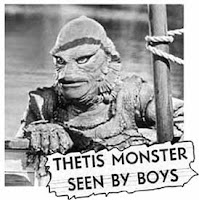 Posted by Andrew May at 1:16 PM No comments:

Whilst the focus of the CFZ Mystery Cat study group is predominantly the search for proof of the British big cats, it would be unrealistic to forget that this is only part of a global mystery-cat phenomenon.

THE THIRD OF KARL SHUKER'S LOOKS AT CRYPTO STAMPS

Following on from my two most recent ShukerNature blog posts (click here and here to view them), here is a third one that once again links a couple of my greatest interests – natural history and philately.

Thanks to my trio of definitive books documenting them (The Lost Ark, 1993; The New Zoo, 2002; and The Encyclopaedia of New and Rediscovered Animals, 2012), I am more readily associated with zoological arrivals and revivals than I am with extinct and endangered species.

So now, by way of contrast and compensation, this present ShukerNature blog post surveys a varied selection of the most famous and extraordinary residents of Nature’s missing menagerie of vanished creatures. Although they are represented nowadays only by lifeless museum specimens and a few faded photographs, their original beauty and grandeur is recaptured for all time in numerous modern-day works of art – including, as selected from my own personal collection of wildlife-themed postage stamps and presented here, an eyecatching gallery of the philatelic variety.

The weather is much improved and it almost feels like a proper English summer here at last. Basically we are hoping that the weather will continue like this for a few more days so Graham can do the next bout of repairs that need to be done on the roof...

One of the traditional aspects of the British summer is the rock festival, where thousands of folk sit in a muddy field and listen to Hawkwind. And it is nice to see that on the outskirts of Bristol, Brisfest are continuing with this fine tradition...
http://gonzo-multimedia.blogspot.com/2012/07/hawkwind-brisfest-returns-to-its-roots.html

And we have another great review for Rick Wakeman's new live album...
http://gonzo-multimedia.blogspot.com/2012/07/link-wakeman-rick-in-nick-of-time-live.html

I know that a lot of Jon Anderson's British fans have been looking wistfully at the parade of eulogistic reviews that I have been posting here on the Gonzo Daily, describing his recent US concerts in such terms that tempt us to fly across the Atlantic poste haste. That would, by the way, be pretty silly as the tour is now over. However, we have exciting news. Guess who will be appearing at Sadler's Wells next month?
http://gonzo-multimedia.blogspot.com/2012/07/jon-anderson-to-perform-at-sadlers-wells.html

Chris Thompson's new live album/DVD is getting solid reviews from his fanbase across Europe. Today, a Dutch review of this perrenial Gonzo Daily favourite.
http://gonzo-multimedia.blogspot.co.uk/2012/07/chris-thompson-dutch-review.html

This is the third day running that we have celebrated Erik Norlander's Portguese language following. And it is the third day on the trot I have spelt Portuguese correctly. Today Erik meets the Boys from Brazil...
http://gonzo-multimedia.blogspot.co.uk/2012/07/erik-norlander-gets-brazilian-review.html

And that is it for today. I am going off to crawl into a small burrow somewhere. Toodle-ooh

On this day in 1983 the world's lowest natural temperature, −89.2 °C , was recorded at Vostok Station, Antartica.

Baby it's cold outside:

Long-delayed posting at the Frontiers of Zoology:
http://frontiersofzoology.blogspot.com/2012/07/sharing-with-igor-burtsev-and-friends.html

Which gives some information that Igor Bourtsev and I have bounced off of each other on Facebook about the end of June.
Best Wishes, Dale D.
Posted by Jon Downes at 10:11 AM No comments:

Posted by Jon Downes at 9:22 AM No comments: