knopnews2
The Nebraska State Patrol confirmed that a woman reported seeing Bigfoot on Interstate-80 near the North Platte interchange this weekend. Police say the sighting occurred Saturday night by a woman named Robin Roberts of Colorado. The sighting reportedly occurred on Mile Marker 197 around 9 ...

Hastings and St. Leonards Observer
Hastings' namesake town in Nevada, USA, has been in the news today with a local woman claiming she saw the famed folklore creature Bigfoot.

Sasquatch Chronicles
Les Stroud on the Joe Rogan show talks about his Bigfoot encounters. This interview is from several years back. Les Stroud is a Canadian survival expert,
Posted by Jon Downes at 11:12 AM No comments:

Posted by Liv McCarthy at 10:55 AM No comments:

JON MAKES THE GUARDIAN IN AN ARTICLE ABOUT LATEST ANALYSIS OF PUTATIVE YETI HAIR... 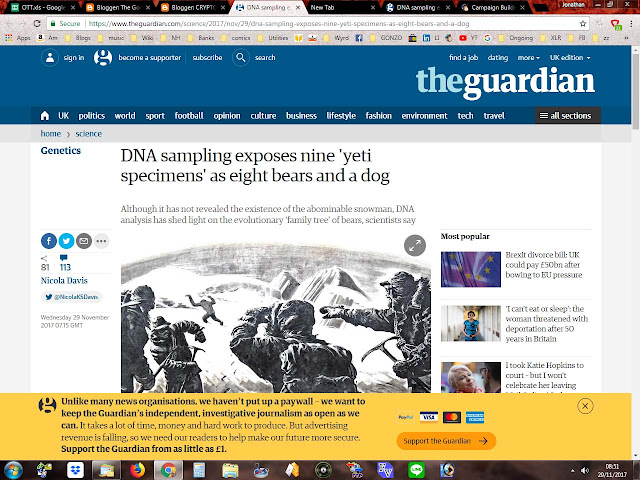 Jonathan Downes, director of the Centre for Fortean Zoology, said that while he applauded the scientific work and agreed that many samples are obviously from bears, he believes the mystery is not yet solved.

“I think there is still a possibility that there are unknown species of higher primate which are still awaiting discovery in what used to be Soviet central Asia,” he said.

https://www.theguardian.com/science/2017/nov/29/dna-sampling-exposes-nine-yeti-specimens-as-eight-bears-and-a-dog
Posted by Jon Downes at 9:20 AM No comments:

ON THIS DAY IN - 1864 - The Sand Creek Massacre occurred in Colorado when a militia led by Colonel John Chivington, killed at least 400 peaceful Cheyenne and Arapaho Indians who had surrendered and had been given permission to camp.
And now some more recent news from the CFZ Newsdesk