The Deaths head hawkmoth Acherontia atropos is the largest moth to be regularly found in Britain. Although not truly a native, it is a common migrant from southern Europe. When conditions lead to a large migration, the striking yellow caterpillars can sometimes be encountered in late summer feeding in potato fields.

The adult moths are unusual in several ways: they have the ability to emit a loud squeak when irritated by expelling air from the pharynx. They also have the habit of raiding beehives for honey - a behaviour enabled by their ability to produce a scent mimicking that of the queen bee. Perhaps most strikingly unusual is the skull-like markings on the thorax. This feature has earned this species a negative reputation, and in popular culture it has often been used in connection with evil and the supernatural, most notably in the 1991 film The Silence of the Lambs. 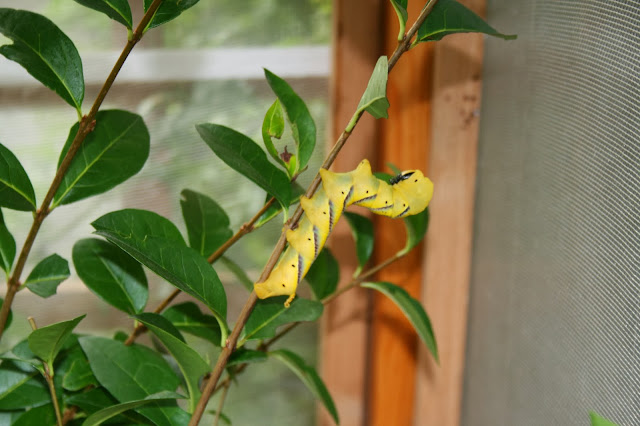 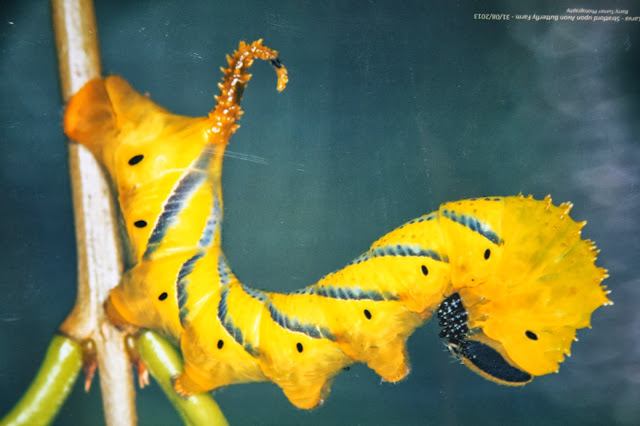 Although in Britain the larvae are most commonly found on potato Solanum tuberosum, in captivity they will readily accept Privet Ligustrum vulgare. The bright yellow larvae are striking in colouration and also size, with individuals growing as large as 12cm.

THE GONZO BLOG DOO-DAH MAN IS IN A HURRY

www.gonzomultimedia.co.uk/about.html
This is a particularly hectic time at the CFZ. Graham is away with his mother and sister, and Richard is here all week. I was recording all yesterday afternoon and evening with Mike David, and he (together with a young lady from Fremington who apparently has a Joss Stonesqe bluesy soul voice) will be back later, and also tomorrow. Expect some new material imminently.
This, however, is where I should probably warn you about the events of next weekend. Corinna and I will be away on Thursday and not returning until Saturday. The blogs will continue uninterrupted, and the next week's issue of Gonzo Weekly will be out either before we go or when we come back. BUT, and this is the big BUT, because neither Graham or me will be here, and because Richard has the computer skills of a three toed sloth with some peculiar learning disorder, there are unlikely to be any e-mail notifications for a couple of days.
Why? Corinna and I are going to Manchester to see Peter Gabriel, and then down to Oakham to collect Mother and bring her down here for the winter. Normal service will, I sincerely hope, be resumed by next weekend...
Another visit to our old friend Thom the World Poet.
http://gonzo-multimedia.blogspot.com/2013/10/thom-world-poet-daily-poem_19.html
Today's Track of the Day is by John Mayall
http://gonzo-multimedia.blogspot.com/2013/10/the-gonzo-track-of-day-john-mayall.html
The Mick Farren tribute concert
http://gonzo-multimedia.blogspot.com/2013/10/mick-farren-memorial-night-featuring.html
Crystal Grenade Releases Debut Album this Month
http://gonzo-multimedia.blogspot.com/2013/10/crystal-grenade-releases-debut-album.html
‘One of the best shows Yes ever did’: The threat of gun fire in Argentina didn’t slow Jon Anderson
http://gonzo-multimedia.blogspot.com/2013/10/one-of-best-shows-yes-ever-did-threat.html
Pete Sinfield has heart attack
http://gonzo-multimedia.blogspot.com/2013/10/king-crimson-vet-peter-sinfield-suffers.html
*  The Gonzo Daily is a two way process. If you have any news or want to write for us, please contact me at  jon@eclipse.co.uk. If you are an artist and want to showcase your work, or even just say hello please write to me at gonzo@cfz.org.uk. Please copy, paste and spread the word about this magazine as widely as possible. We need people to read us in order to grow, and as soon as it is viable we shall be invading more traditional magaziney areas. Join in the fun, spread the word, and maybe if we all chant loud enough we CAN stop it raining. See you tomorrow...

*  Jon Downes, the Editor of all these ventures (and several others) is an old hippy of 54 who - together with his orange cat (who is currently on sick leave in Staffordshire) and two very small kittens (one of whom is also orange) puts it all together from a converted potato shed in a tumbledown cottage deep in rural Devon which he shares with various fish, and sometimes a small Indian frog. He is ably assisted by his lovely wife Corinna, his bulldog/boxer Prudence, his elderly mother-in-law, and a motley collection of social malcontents. Plus.. did we mention the orange cat?
Posted by Jon Downes at 12:19 PM No comments:

DALE DRINNON: Laocoon serpents, Sykes' bear, Frontiers of Anthropology, Benny's Blogs, and a visit to the singular world of Cedar and Willow