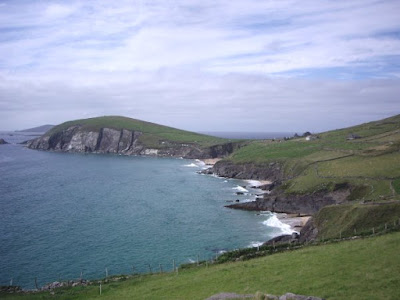 The beauty of the Dingle Peninsula. 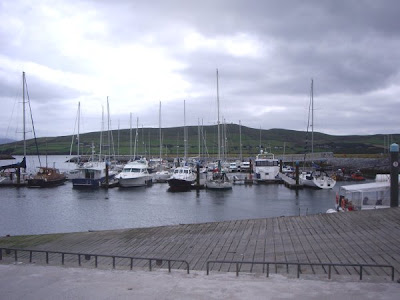 The Dingle Peninsula is renowned as one of the most beautiful stretches of unspoiled coastline that Europe has to offer. Whilst exploring this area of Eire Sue and I became aware of a Public Aquarium in the town of Dingle itself. 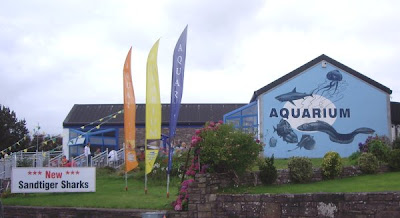 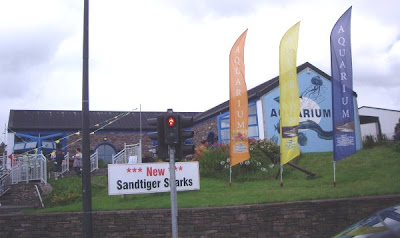 From the outside the building looked like it housed a small aquarium that we would be able to enjoy in a short amount of time? Once through the entrance door, we were ‘shocked’, as the interior was much larger than we could ever have imagined. I felt like a character from Dr. Who, walking into the tardis for the first time and discovering that first impressions can be very deceptive!

This Aquarium has a concept and has been arranged to give the impression that you are inside a forgotten Mayan cave with carved pillars, strange figurines and ivy growing on the walls etc. To add to the effect this theme is carried on into the exhibition aquariums.

The opening three aquariums are home to various native marine creatures and the lobster here really caught my eye. 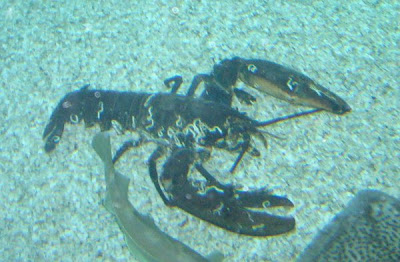 Lobster
Tropical freshwater aquaria followed. The first of these is a true spectacle. Open-topped, this huge aquarium is home to variously sized Silver Dollars, Black Pacu, Clarotes catfish, Leporinus fasciatus fasciatus, Tiger Shovel-nosed catfish, Severums, stunning Oscars and a shoal of Madagascan Rainbowfish. Amazingly each specie seemed to know the ‘water zone’ in which it should be swimming and this ‘kept the peace’ amongst the various residents. 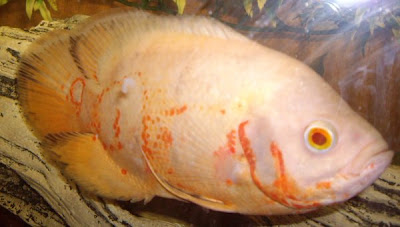 One of several beautiful Oscars

The first of two small Amazonian biotope aquariums held a selection of small characins alongside Peppered Corydoras, Gibbiceps Plecs. and Silver Angelfish. The second of these had its décor arranged around a large tree root with Gold Lace Angelfish, Multiradiatus Plec., Cardinal tetras and Dwarf cichlids inter-acting and swimming between the branches. 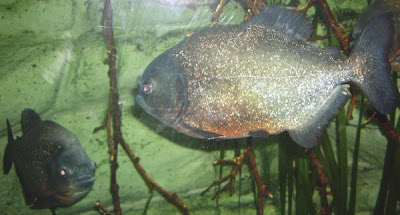 No Public Aquarium would be complete without a Piranha display.

A stunning display of Black Delta Guppies followed before the ‘must have’ Red-bellied Piranha display. Asian fish followed with a tank devoted to various Puntius and Danio species. Africa was not forgotten and the biotope aquarium was ‘stunning’. It amazed me to see a mixture of Neolamprologus brichardi, various riverine Synodontis, Elephant-nosed fish, Congo tetras and Red-eyed tetras all getting along in seemingly perfect harmony.

But it was the final aquarium in this section that I will long remember! A Rift Valley set-up with Caruleus cichlids and Dolphin cichlids also contained the most darkly coloured Asian Barred-Red Parrot cichlids that I have seen. I was ‘taken aback’ by the sheer beauty of this display.

A number of beautifully thought out tropical marine displays followed. The highlight of these is a massive aquarium home to Sand Tiger Sharks; a number of over-sized marine fish and a huge Turtle. In a smaller display the colours of a Picasso Triggerfish were an absolute delight to behold. 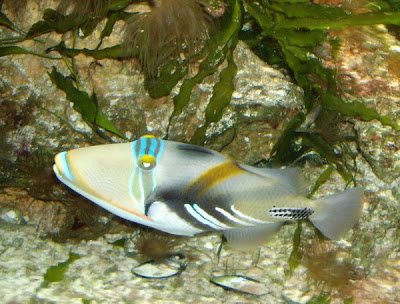 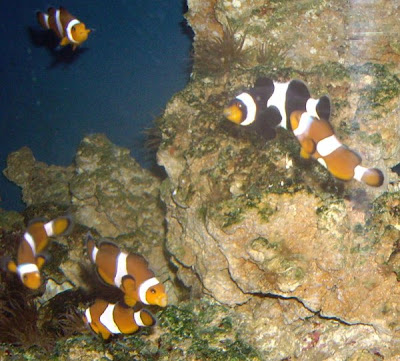 Brackish fish were not forgotten with a cylindrical aquarium housing a large shoal of Fingerfish.

Now we are onto the final section that is home to native fish. Three displays of native marine fish are followed by a freshwater display that combines small Pike with Rainbow Trout.

Whoever created the displays here took much time and thought not only to mix species but also to find colour combinations of fish that really catch the eye. The Mayan theme really works and is combined with some excellent electronic information displays. These work on a 2-page system that you change with the touch of a finger, focusing on the fish and other water-living creatures that each display contains. All of the aquaria were well kept and the fish on show all looked in perfect health.

Both Sue and I were very impressed with Dingle Oceanworld. If you are in the Dingle area this aquarium is a ‘must visit’ and is excellent value for the 12 Euro entrance fee.

As you read this report a new Penguin exhibit is set to open.

THIS YEAR'S MOTHING SEASON GETS TO A FLYING START

http://www.birdguides.com/webzine/article.asp?a=2611
Posted by Jon Downes at 12:57 PM No comments:

AND THE COLOURED CHICKS GO...(Do de do) 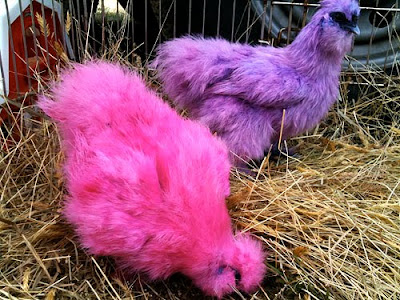 Robert Schneck's
post about multicoloured chickens the other day reminded me of an obscure incident from my youth.

Back in 1968 (bloody hell, 43 years ago) my family were on holiday in Western Australia, and we visited the Royal Perth Agricultural Show. Amongst the other beasties on display (the most spectacular of which - to me at least - was a tank of sea snakes; animals I have never seen before or since) was a pen of multicoloured chicks.

The signage claimed that they were dyed bright colours to protect them from the predations of birds of prey who would be dazed and confused at the sight of multi-coloured fowl.

Even aged eight I thought that this was highly unlikely. But could it, indeed, be true? What do you think?
Posted by Jon Downes at 12:54 PM No comments:

Venezuela
Venezuela is home to Angel Falls, the world’s highest waterfall, with a rather impressive plunge of 2,648 ft. It takes its name from the man who made it famous, Jimmie Angel. I bet the tourist board is thankful his surname wasn’t Sewage.

Photographs feature heavily in the folklore of cryptozoology. There is the fabled 'thunderbird' photo that many claim to remember seeing but no one has successfully tracked down; then there are other photos that are easily located but do nothing to clear up the mystery - just think of the surgeon’s photo of Nessie. The animal that I have chosen to represent Venezuela has its own famed picture, today we are looking at De Loys ape.

Francois de Loys was a Swiss geologist searching the jungle for black gold, that’s oil to those who have never seen the Beverley Hillbillies. Somewhere on the Tarra River, in the border area between Venezuela and Colombia, de Loys and his party set up camp. Imagine their surprise when their pleasant evening was interrupted by a couple of large angry ape-like creatures that stood 5 ft tall; they appeared screeching and hooting at the men, not only shaking branches but throwing things at the gathered group. Perhaps not that unexpectedly the men picked up their rifles and started shooting at the mystery animals; once the smoke had settled one of the apes had gone and the other was lying dead on the jungle floor, once again proving that sticks and stones may break bones but bullets will easily kill you.

And what an unusual creature they had killed; it was tailless and it had 36 teeth, 4 more than any other monkey to be found on the continent. Suitably impressed they sat the dead ape on a spare crate, propped it up with a stick and photographed it. And that is were the real mystery starts. The skin, skull and jaw bone that had been taken by the group were lost, and without them the photo came under greater scrutiny. It was suggested that this was not really an ape but rather a spider monkey that had been posed so that its tail was hidden, and as no one could be certain of the size of the crate De Loys ape had gone from being a missing link to a hoax.

That’s not to say that de Loys was being untruthful; there is a tradition of large monkeys in the area that continues to this day with reports of the Mono Grande, a tailless ape-like creature 5-6 ft tall known for its eerie howling and for throwing stones at huts.

Where next? Well let’s step over the border and enter our last South American country, Colombia.
Posted by Jon Downes at 12:51 PM No comments:

BLURB FROM YOUTUBE: My Mom says this doesn't look like an owl to her. So, what the heck is it? A hawk? I know it's not a buzzard. The buzzards won't be sitting in my yard, staring at me, until later next week on their way back to Hinckley. (Yes, my yard fills with turkey vultures. Big, hideous turkey vultures.) My Mom and The Only Nikki think it could be a Red-Shouldered Hawk.
Posted by Jon Downes at 12:51 PM 2 comments:

If you take a look at the Moon tonight you'll notice that it looks bigger than usual, that's because it is at it's perigee, it should be worth a look.
And now the news, thanks, as ever, to our dedicated and hard working news blog editor Gavin Wilson:

Have you spotted big cat in Crowland?
Big cat sightings on rise in Cape Breton
Iran launches first capsule for living creature in...
Heavens above, they're desert flying fish