New At The Frontiers of Zoology:

Lars's birthday was yesterday, and I missed it.... Whoops
Posted by Jon Downes at 12:27 AM No comments: 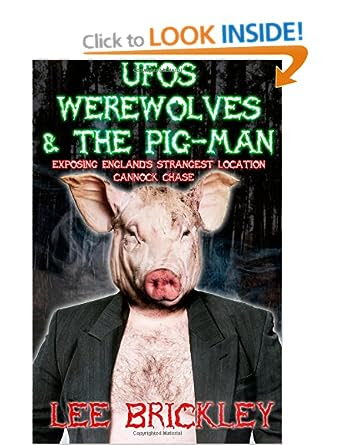 "UFOs, werewolves, orbs, more monsters than an old Universal Studio film. Cannock Chase has them all, and now Lee Brickley is bringing them all into your living room in his exciting new book."
 Brad Steiger


The eternally mysterious woodlands of Cannock Chase in Staffordshire, England, are known throughout the world as an entry point for bizarre and unearthly paranormal phenomena. From werewolf sightings and spectral encounters, to documented UFO crashes and spooky urban legends, this supernatural portal area experiences more inexplicable activity than you even dare imagine.

In this book Lee Brickley chronicles his investigation into the very location many researchers call “England's Strangest”. With brand new sighting reports, spine-tingling tales of gruesome monsters, and fresh information on the alleged top secret military connection that could be responsible for it all, are you brave enough to find out what's really going down in the woods today?

About the Author:
Lee Brickley is a British freelance writer and publisher who works for several magazines and websites. Lee
has a particular interest in paranormal/cryptozoological themes and has been writing on the subject for many
years. With appearences on many top radio shows, big things are on the horizon for this dedicated new
author. You can contact him directly at leebrickleyauthor@gmail.com

Or for more info on the mysteries and happenings on Cannock Chase, his paranormal blog can be found at:
www.paranormalcannock.blogspot.co.uk

Quotes:
"Cannock Chase has long been known as a UFO hotspot and a place where all sorts of other paranormal
phenomena have occurred. It's one of the UK's most mysterious locations and might even get into a global
Top 10 list of spooky sites, alongside such places as Area 51, Roswell, the Bermuda Triangle and a few
others."  Nick Pope, MoD UFO Project, 1991-1994

“At first glance, Cannock Chase is a wonder to behold with its amazing and abundant natural beauty.
However, there is another part of Cannock Chase that dwells within the shadows. A place where madness
has substance and nightmares have their own perverse allure. Cannock Chase is as mysterious as it is
beautiful. It is a place where the veil is thin, allowing brief glimpses between this world and the next”
Paranormal author Tim Swartz

"A high plateau bordered by the Trent Valley to the north and the West Midlands to the south, the huge and
picturesque Cannock Chase has been an integral feature of the Staffordshire landscape for generations.
There is something deeply weird about the Chase: it has strange and monstrous inhabitants in its midst.
Werewolves, large black cats, aliens, spooks and spirits, Bigfoot, wallabies, wild boar, and huge snakes
have all been reported from within the depths of these mysterious woods..." Nick Redfern, author of
many books including Monster Diary and Wildman

"Cannock Chase has been the centre of many unusual sightings over the years. The Cannock Chase Beast' is
probably the most legendary phenomena, but other supernatural horrors have been reported as well.
Unknown hominids and serpents reportedly haunt the infamous forest, creating caution for those who
travel through it” Fortean author Lon Strickler

"Cannock Chase is like a slice of the ancient medieval forests that covered England. Somehow this world
within a world has survived in the heart of modern industrial Britain. Should we really be surprised that
some of its 'residents' are so strange?"  Cryptozoologist Richard Freeman

“Lee presents a fascinating and detailed insight into Cannock Chase and the mysteries that surround this
region. His understanding of the area and strong local knowledge offer any reader and fan of the
unexplained the chance discover why this area plays an important role within the UK's rich history of the
unknown” Colin Hall, author of Fact or Fiction? The Paris & M6 Crashes

Happy Birthday, hun
Posted by Jon Downes at 12:08 AM No comments:

THE GONZO BLOG DOO-DAH MAN IS HOLDING THE FORT

Today has not been the best of days. Corinna has not been well, although she is now on the mend, and all sorts of other petty annoyances have got in the way. However, none of this has anything to do with the fact that tomorrow's blogs are coming out tonight. Basically I am away all day filming a documentary about the Devil's footprints in South Devon, and rather than get up too early I am doing them tonight..

*  Jon Downes, the editor of all these ventures (and several others) is an old hippy of 53 who, together with his orange cat (who is currently on sick leave in Staffordshire) and two very small kittens (one of whom is also orange), puts it all together from a converted potato shed in a tumbledown cottage deep in rural Devon, which he shares with various fish, and sometimes a small Indian frog. He is ably assisted by his lovely wife Corinna, his bulldog/boxer Prudence, his elderly mother-in-law, and a motley collection of social malcontents. Plus... did we mention the orange cat?
Posted by Jon Downes at 12:04 AM No comments:


On this day in 1952 comedian and actor Alexei Sayle was born. Sayle is best known internationally for his part in the third Raiders movie, Indiana Jones and the Last Crusade (“And I even like the colour.”), but in Britain he is known for having been one of the leading lights of the “alternative” comedy scene in the 80s and 90s, without which we would have still had everyone thinking Morecambe and Wise and Little and Large were the height of comic sophistication.
And now the news: