To the chagrin of cryptozoologists and the delight of their critics, the conclusive identification of a longstanding mystery beast is not a common occurrence. That is why I have particular pleasure in presenting herewith one such revelation that I was personally able to achieve.
Read on...
Posted by Jon Downes at 12:30 PM No comments:

Today seems shaping up to be quite a nice one at the Gonzo Daily - touch wood. I had a nice e-mail from Merrell Fankhauser yesterday, who liked my brief aside about the Pacific Giant Octopus at Newquay Aquarium. Well, Merrell, just for you check this out:
http://forteanzoology.blogspot.com/2012/07/im-never-eating-kalimari-again.html
However, moving swiftly on, I suppose that we should get back on topic.

Tony Hawks is a massively entertaining comedian and is making serious inroads into the road of film. I very much enjoyed his first film, in which he travelled around The Emerald Isle with a refrigerator, and have every intention of watching is second film soon. However, he wants to know whether any of the readers of these august pages is Moldovan..http://gonzo-multimedia.blogspot.co.uk/2012/07/tony-hawks-are-you-moldovan.html

As regular readers of my inky fingered scribblings will know, I am somewhat of a fan of the massively talented Helen McCookerybook. We have a shared punky past in common, and whilst tootling about on the internet this morning I found an interesting article about her post-punk band 'The Chefs' who were active in Brighton some decades ago. I heartily recommend that you check it out.http://gonzo-multimedia.blogspot.co.uk/2012/07/helen-mccookerybook-blast-from-her-past.html

I also found this rather interesting article about one of my favourite albums, and the birth of Gonzo recording artists Jefferson Starship. It has several snippets of information that I had not read before, and is certainly worth a few minutes of your time to investigate it.http://gonzo-multimedia.blogspot.co.uk/2012/07/birth-of-jefferson-starship.html

The nominees for the highly prestigious Prog Rock awards have been announced and they include several artistes who are presently recording for Gonzo. Is Gonzo Daily on there, nominated for being best daily online magazine in the known universe? is it heck! But maybe we shall get there next year..http://gonzo-multimedia.blogspot.co.uk/2012/07/jon-anderson-peter-gabriel-rick-wakeman.html

Is this what passes for news these days? A picture of a fat hippy in a concverted potato shed, brandishing the contents of his postbag. Well, as it includes the new CD by the ever talented Michael Des Barres, and an interesting book about wildlife crime, I think that it is not just newsworthy, but probably is worthy of a Pulitzer Prize...http://gonzo-multimedia.blogspot.co.uk/2012/07/my-postbag-reptile-smuggling-with.html

Regular readers will be aware that although the vast majority of what I write about in these pages is directly related to artists who have product(s) released by Gonzo Multimedia, their friends and relations, I sometimes digress onto other things that interest me like this biography of 'The Stone Roses' who have just reformed.http://gonzo-multimedia.blogspot.co.uk/2012/07/stoned-roses.html

Once again I have been stealing stuff from the website of Michael Des Barres. I have already made jokes about this being in the best traditions of British journalism, ao I will say no more about thisd (which I believe is the first mak=jor review of Michael's smashing new CD) apart from to say that although I once or twice did some work for the News of the Screws, no telephone hacking whatsoever, was done to obtain this story.http://gonzo-multimedia.blogspot.co.uk/2012/07/michael-des-barres-first-album-review.html

And that, my dear friends, is that for today. I will be back again tomorrow, but I should warn you that I will have a houseful of stepdaughters all weekend as they are here to celebrate the release of 'Carnaby Street' on Tuesday (and their Mama's birthday), so I may well be a little late..
Posted by Jon Downes at 11:22 AM No comments:

On this day in 1998 Roy Rogers died. Rogers was best known for his cowboy themed roles in movies and on TV, so popular was Rogers that Gaylord DuBois wrote a long running comic based on Roger's cowboy persona. One of the TV shows had a 'hoop snake' in it which led many people to believe that there were snakes that moved around like this in the Wild West leading to the hoop snake becoming a cryptid that some folks believe exist to this day or insist that they have seen on nature documentaries. 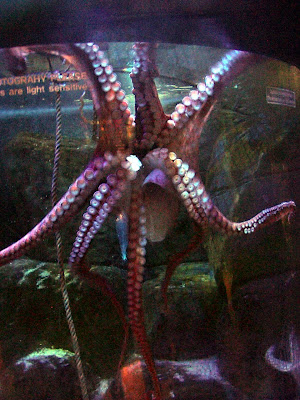 Yesterday Corinna, Mother and I went to Newquay aquarium - something I have been intending to do for about fifteen years. Whilst there we made friends with a female Pacific giant octopus. I really had no idea that they were so intelligent; she played with toys, interacted with her keepers on a personal level, and - on top of this - Max told me the other evening that there is now evidence that they actually dream (they appear to have RAM sleep).
If they lived longer than five years, then the potential for development of these animals is frightning!
Posted by Jon Downes at 9:31 AM No comments: