WATCHER OF THE SKIES: Gannets, bitterns and lots lots more

The Bass Rock was formed 320 million years ago and is the remains of one of many active volcanoes in the area and is 4km (2.5miles) from North Berwick's shore. By summer it will be crammed with over 150,000 gannets, making it the biggest single island gannet colony in the world. The Scottish Seabird Centre in North Berwick are celebrating the landing on the Rock of the first gannet in 2012; its appearance picked up on the five star Discovery Centre's interactive live cameras.

The Firth of Forth islands are an area of international importance for seabirds. During the
coming months around 500,000 seabirds will make the area their home, including puffins,
kittiwakes, guillemots, razorbills, fulmars, shags and terns. And Bass Rock itself will soon
change colour as more and more gannets return, eventually becoming completely white.

BTO Cuckoo update
The cuckoos are on the move and migration back to Britain has begun. Check updates at: http://www.bto.org/science/migration/tracking-studies/cuckoo-tracking

Recession not affecting sales of bird food
The country may be suffering from a recession, but it would appear that garden birds are not having to tighten their belts too: sales of bird food has expanded during the cold conditions. It seems that people’s days are brightened by the sight of birds in their garden and although they are having to cut back on all sorts of things due to the current economic climate, they are still keeping their bird-feeders and tables stocked.

Tim Harrison, BTO Garden BirdWatch, commented: "These resilient sales figures show the deep affection that people have for garden birds. This is why, as a country, we spend hundreds of millions of pounds on bird foods and feeders every year. With Valentine's Day just around the corner, give chocolates to your loved one, sunflower hearts to your birds, and your precious sightings to BTO Garden BirdWatch."

For a free BTO Garden BirdWatch enquiry pack including a copy of their fantastic quarterly magazine, email gbw@bto.org, tel. 01842 750050, or write to GBW, BTO, The Nunnery, Thetford, Norfolk, IP24 2PU.

Somerset home for bitterns
Natural England acquired The Loxtons – a former peat extraction site – in 2009 and are working on creating prime habitat for wetland wildlife, including marsh harriers, otters and the once extinct bittern. The six hectares of Somerset land known as Shapwich Heath National Nature Reserve will eventually have a varying depth lagoon with shallow areas favouring feeding bitterns and deeper channels for wintering ducks. The site will be enclosed with three different types of bund wall: clay only, peat/clay mix and peat ‘unriddings’ (leftover worked peat).
Simon Clarke, Natural England's Reserve Manager at Shapwick Heath, said: ‘It is a challenging project, requiring pumping at the wettest time of the year so that the bunding material is workable, but lowering the water levels appears to have been appreciated by the wildlife.

‘I have regularly seen dozens of little egrets and a great white egret on the exposed mud, along with otter tracks. The contractors should be finished later this month and then the lagoon will be allowed to fill naturally via rainwater, with reeds colonising the exposed bunds, providing a fantastic new habitat.'
You can read more about this at:
http://www.wildlifeextra.com/go/news/bittern-somerset.html

Gloucestershire farmer given conservation award
Gloucestershire farmer, Mark Tufnell, has been given the new Barn Owl Conservation Grade award after rearing five chicks last year. The Conservation Grade Nature Friendly Farming scheme helps farmers cultivate wildlife habitats on their land.
Mr Tufnell, who runs Calmsden Farms near Cirencester, said: "We still see the mother owl flying around the nest-box. I hope she breeds again this year and that more farmers start farming this way so that her chicks can raise young on their land too."
Mr Tufnell, who grows oats and wheat for cereal and flour manufacturers, was one of 50 farmers involved in the project.
Tim Nevard of Conservation Grade added: "By measuring the fledging rate of barn owls - one of our peak farmland predators - we're measuring the health of all wildlife in the area, down to rodents, insects and plant life.
"Increasing wildlife on farms not only keeps the ecology of our countryside healthy, we see more birds and more bees and hear more buzzing and birdsong."
http://www.bbc.co.uk/news/uk-england-gloucestershire-17098956

Illegal bird shooting gang hunted
Police are hunting a gang of three men who were spotted illegally shooting birds in the Lancashire countryside on Glasson Marsh, near Morecambe.
Upset witnesses said one gull was shot and thrown up in the air repeatedly and used for target practice. Three shots were also fired at a Red-Breasted Merganser, and a small bird was shot and killed near the water’s edge.
Now police in Morecambe are encouraging anyone with information about the offence to get in touch. PC Antony Marsh said: “Glasson Marsh is a unique location and is popular with bird watchers and widely used by legitimate wildfowlers.
“We are working closely with these groups to identify these irresponsible and cruel individuals.
“I would remind people that Gulls and Red-Breasted Mergansers are not lawful quarry species.
“Lancashire Constabulary takes wildlife crime very seriously and we will take positive action against such offenders under the Wildlife and Countryside Act.”
http://www.lep.co.uk/news/local/hunt_for_illegal_bird_shoot_gang_1_4249817

Birdwatchers’ paradise
Six years of green-fingered nurturing, has produced an avian paradise for a huge variety of bird species at the home of Andrew and Mandy Bunnett, including peregrine falcons, barn owls, kestrels and woodpeckers. Their garden has been recently given the title of Britain’s Best Bird Watching Garden.

The couple now offer bed, breakfast and birdwatching. Mr Bunnett, a 45-year-old company director, said: ‘We have had quite a lot of people stay already and we have only been open since November. When we came here there was just a lawn with a few sheds in it, but we had a plan and transformed it.

‘We like to think it is now a bird-watchers’ paradise. It is lovely to see something we have worked so hard on give pleasure to others.’

Mrs Bunnett said: ‘The views are stunning and the number of birds we see in the garden now is phenomenal. There is a bird bath, a wood pile and an unkempt area of pignut, wild red clover and wild fennel – ideal for honey bees.

‘There are hedges of hawthorn and blackthorn, with willow and conifer trees, home to several ring-necked doves.

‘Every year swallows nest in the garage. We have seen peregrine falcon, buzzards, barn owls, kestrels and lots of pheasants.

‘The garden is very peaceful and relaxing, full of colour and life, but the most exciting experience for us is the sound of nightingales singing, heard from April to June.’

From the Carlisle Panther newsfeed:

“To begin with he thought it might have been a dog, but when it stood up he saw its long tail curled up at the end, which is the classic sign of a panther." 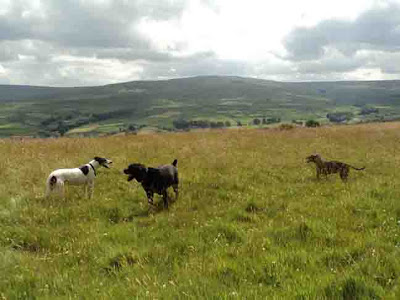 Posted by Jon Downes at 9:53 PM No comments:

From Tabitca Cope:
I just want to thank CFZ Press for the great job they did of publishing my book Dark Ness. So far the comments I have received about the design of the book :

You did a brilliant job , better than some of the big publishers could do because you have a feeling and understanding for cryptozoology. Keep up the good work!

http://cryptozoologynews.blogspot.com/
On this day in 1945 Barry Bostwick, who played Brad Majors in the Rocky Horror Picture Show was born.
And now the news:

A news story we published yesterday, includes a reference to a rodent species called "the black vole" living in Ireland. This is a regional name for the European pine vole (Microtus subterraneus)which - as far as we know - doesn't live in Ireland. Presumably the original authors meant the bank vole (Myodes glareolus; formerly Clethrionomys glareolus)which has been introduced to Ireland and is colonising much of the south and southwest.

So the Beast of Smallthorne picture is a hoax. I am not at all surprised as it looked very much as if it was cut and pasted with Photoshop.

However, I have never wanted the CFZ as an organisation, or me as a person to become so blasé about what we do that I automatically dismiss something out of hand just because it looks as dodgy as blazes. And I always try to be polite, even when someone is trying to trick me with a palpable hoax.

I must admit that I wonder who was responsible and why. The picture was sent to me as a large photographic print rather than by email, so it must have cot the guy responsible a few quid.

Compare the images below: 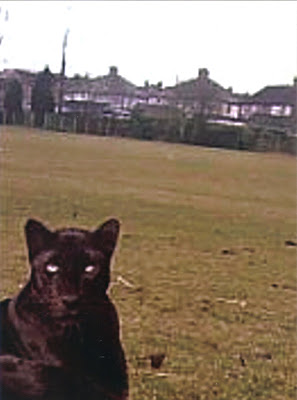