Summertime… In April a '55 Feet Long Unknown Fish Species’ washed ashore near Guangdong, China, according to what was published for the first time in May 2011, for example, from Cryptomundo. Nearly two months have gone by but now some newspapers around the world are publishing the story (again) and so the carcass is the object of various discussions on what it could be.

For those confident with whales and whale carcasses, it’s obviously another decomposed whale (and therefore a mammal not a fish as said in many articles btw). The picture shown widely within English sources is low quality but there are two better ones available on Chinese websites (see below). On the left side of both pictures lies the tail and rest of the tail fluke so on the right side of both pictures we have the head or rostrum. This indicates that the bone sticking out of the sand near the rostrum is nothing more than one of the curved lower jaws of a rorqual whale. From the tip of the decomposed rostrum to the estimated middle of the body we can identify ventral grooves what is absolutely typical for rorquals.

So all characteristics and also opinions of scientists (like, for example, Scott Baker of Oregon State University Marine Mammal Institute) agree to the same identity: a rorqual. The only question remaining is what species of rorqual. If we accept the length of 55 feet it has to be one of the greater whales like Fin-, Sei- or Blue whale. But according to most chinese sources the length of the carcass was only 13 meters (42 feet) - what is also the opinion of Mr Baker and myself - so it could also be a Bryde’s whale (with a maximum length around 15.5 meters for this species). Identifying the exact species is difficult from these pictures as they show no distinct feature for identification, unlike the carcass of Ataka, Egypt, of 1950 (three ridges on the dorsal side of the rostrum identifiying it clearly as Bryde’s whale; for a detailed identification see http://www.kryptozoologie-online.de/Dracontologie/Salzwasserkryptide/ataka-kadaver.html).

The whale was buried but as whale strandings in China are rare the Chinese officials will examine the carcass later. 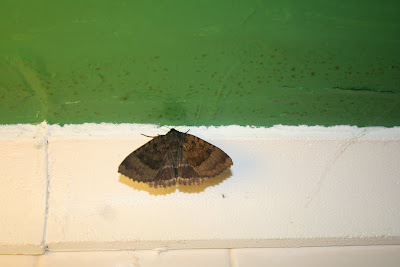 Back when I was a boy and used to collect moths, one of the prized items in my collection was the forewing of a moth called Mormo maura - The Old Lady. I read about it in The Observer's Book of Larger British Moths which my long-dead Uncle Tim gave me for my 8th birthday, and I always rather wanted to meet one in the flesh so to speak.

When I first got the book I was a schoolboy in Hong Kong, and despite being surrounded with a dazzling panoply of exotic species I read and re-read the book Uncle Tim had given me, and memorised many of the species. 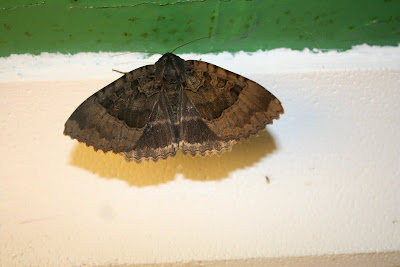 In 1973 (by which time we were back in England) we went on a family walk to Bucks Mills, and there, on the corner of the last house before the twisty little path down to the beach I found a huge spider's web, and in the web was the front wing of one of these moths.

And until last night, I never saw hide nor hair (OK moths have neither hide nor hair, but you know what I mean) of this species again. 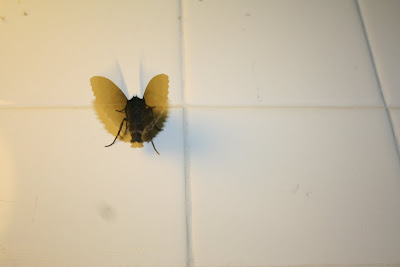 McC an old lady came in through the bathroom window.

My days of moth collecting except in pictures are long gone, so I called Corinna, we both photographed the venerable she-moth and I released her out into the night.

It is nice when - a week before one's 52nd birthday - one gets to realise a lifelong ambition, albeit a minor one.

HAUNTED SKIES: FROM THE ARCHIVES - UFO articles from 'Popular Mechanics' - A Dummy Explanation 00.09.97

On this day in 897 Wilfred the Hairy died. He was a count of Barcelona and as far as I can tell not of major historical significance (apologies to our Spanish friends if I've got that wrong though) but he did have a really cool name.
And now the news: