This first appeared in Fortean Times, issue 290, July 2012. I have corrected the French-language spelling mistakes that appeared in the print article, and for which I apologise. (Thirty-year old French O Level, as alluded to in the report!) 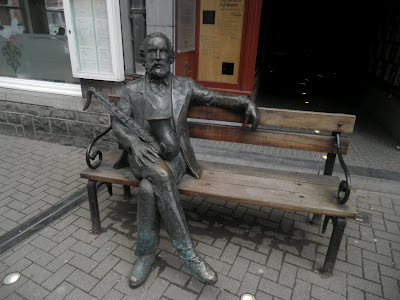 The Belgium town of Dinant lies at the foot of the Ardennes mountains and at the end of the railway line from Brussels. You've done Dinant in a couple of hours, taking in the grey, onion-domed church and the cable car ride to the citadel that dominates the town. Local boy Adolphe Sax, the inventor of the saxophone, is immortalised in bronze, sitting on a bench on the pavement with his instrument outside La Maison De Monsieur Sax, "more or less on the spot where his original house stood."

But I wasn't in this underwhelming small town in Belgium to pay homage to Monsieur Sax. I had come to Dinant for the annual "Colloquium of Cryptozoology" – a whole weekend of cryptozoology talks – in French!

On this day in 1972 my girlfriend, and most likely future Mrs Lewis, Ann Carroll, was born.

Ann wanted this song as a birthday request, sooo...

And so another day trundles on. The bad weather seems to have abated, and the weather forecast website says that it will be fine for the next fortnight, but - to be quite honest - I will believe it when I see it..

We start off with news about a live interview featuring the ever groovy Michael Des Barres, who will be on Blogtalk Radio live tonight at 11:00PM UK time. Be there or be square...
http://gonzo-multimedia.blogspot.co.uk/2012/07/michael-des-barres-live-interview.html

At the risk of sounding more like a tedious old hippy than I already do, I like to see the foreign reviews of Gonzo artists, like this Portuguese one of Erik Norlander. It shows that Rock Music truly is international in scope and is one of those few things that brings people of different nations, creeds and colours together
http://gonzo-multimedia.blogspot.co.uk/2012/07/erik-norlander-potruguese-review.html

I have just been sent a pdf of an eminently cool little rock and roll newsletter called Keep Rockin'. As it features our very own Merrell Fankhauser I have a perfect excuse to give it a plug on today's Gonzo Daily.
http://gonzo-multimedia.blogspot.co.uk/2012/07/merrell-fankhauser-keep-rockin.html

Jon Anderson's recent US Tour really appears to have been a smash. I wish I had been there to see it, but the bits I have seen on YouTube make me really look forward to the next batch of UK dates..
http://gonzo-multimedia.blogspot.co.uk/2012/07/jon-anderson-coach-house-review.html

Chris Thompson really is a massively talented dude. His recent CD/DVD live set has been on heavy rotation (as I believe that radio shows call it) on the Gonzo Daily hifi, and we look forward to seeing him next time he tours.
http://gonzo-multimedia.blogspot.co.uk/2012/07/link-chris-thompson-live-live-at-berlin.html

It was only the other day that I found out quite how many film scored Mimi Page has composed. According to brief thingumy on her Facebook page it is the thing that she enjoys doing most, and on the evidence of these excerpts youcan see why.
http://gonzo-multimedia.blogspot.co.uk/2012/07/mimi-page-film-scores.html

I will be back tomorrow, and hopefully I will be a little more compos mentis than I am today. The mens sano in corpore whatsit is not really working for me at the moment...
Posted by Jon Downes at 1:02 PM No comments:

I do wish people would stop calling these creatures 'chupacabras' when they most certainly are nothing of the sort. However, look on the rump of this one. Is it just me, or cal one see what looks like a vague outline of one of the weird cushion-like pads found on the Cuero creature? Or am I jyst doing a Captain Ahab and smelling land where there is no land?

Chupacabra Seen In Frisco, Texas – MHTV Declares It To Be Coyote with Mange

This chupacbara sighting is very important for one reason – MHTV is going on the record saying this is just a coyote with mange.

Earlier this month, a very different book of mine was formally accepted for publication by Coachwhip of Landisville, USA (the company that also published my most recent book in print, The Encyclopaedia of New and Rediscovered Animals, 2012). A most exciting venture and a marked departure from my previous books and writing style, it is entitled Creatures of Shadow and Night, and in it I shall be retelling the folklore and legends of a wide range of sinister and decidedly dark supernatural entities of the night, most of which are relatively or entirely unknown outside their respective homelands. Moreover, each of my verbal portrayals will be accompanied visually by a spectacular full-colour illustration specially prepared by highly-acclaimed graphics artist Andy Paciorek. Now, presenting a tantalising taster of what is to come, here as a ShukerNature exclusive is one of the entries from our book, combining my text with Andy's artwork. We hope that you enjoy it!

LINK: Big-footing it in the Parks: Sightings and Encounters

We were lucky enough to catch a showing of Syfy’s Bigfoot a few weeks ago, which got us thinking about everyone’s favorite mysterious forest dweller and inevitably led to hours of Googling. As it turns out, we’re not the only ones who enjoy frequenting the state parks; Bigfoot apparently likes to hang there as well! A number of reported Bigfoot sightings have happened in our dear state parks. If, like us, you’re intrigued by all things Bigfoot and are dying to catch a glimpse of the maybe-mythical-maybe-real creature, here are some of the parks where Sasquatch supposedly likes to make an appearance: