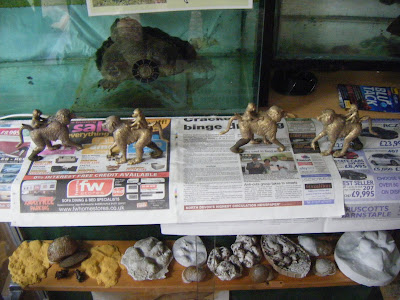 Posted by Jon Downes at 5:14 PM No comments: 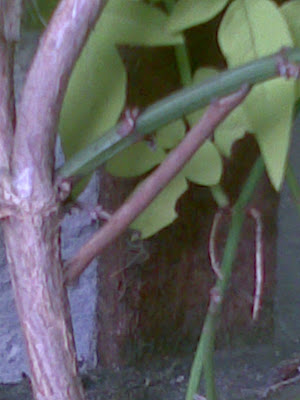 Hi - I found this yesterday evening while hunting for vine weevils. It caught my eye because although it is exactly the colour of the older jasmine stems, it was weirdly attached across two green stems like a strut. It feels velvety soft and is very strongly attached at each end. It doesnt move when touched and has no legs. I thought it might be a stick insect because of the way it looks and where it is and it has the two short rounded claspers on the end. It was difficult to get a good picture, but from close inspection it has no legs and no antennae.

It moved a short distance to another pair of twigs during the night and I think it has left behind a reddish brown discoloured wound on the green stem where its head was. I can only find the one.

I think I know what it is, (the caterpillar of a Geometrid moth) but would like suggestions...
Posted by Jon Downes at 3:45 PM No comments:

I was rather intrigued by the following in the novel `Peony` by the late American author and Sinophile Pearl S.Buck ( 1892-1973 ). The book, first published in 1948 is about a Jewish family in the Chinese city of Kai`feng,historically a city with a large Jewish population.

David, a key figure in the story has just left a synagogue after a conversation with his father: “ Then he went to the court of the Confucian temple, where every strange and curious sight was to be found, the magicians and the jugglers and the dancing bears and the talking blackbirds; but all these things, which usually gave him joy, now gave him none. “ (1)

REQUEST: If anyone has anything of interest from a cryptozoological point of view on turtle and tortoise cryptids worldwide, including the U.K. please can they let me know at flyingsnakepress@hotmail.co.uk ? Other than the Hanoi lake one as that has been well covered already.

NEWS: Anyone living in Derbyshire or Cheshire who joins a library in the former county can join and use the 19th British Library newspaper catalogue - and use it for free from their own computer! Whether they live in Derbyshire or not. I have already found a few “ pearls” already.

Something about the way you taste
Makes me want to clear my throat
There`s a message to your movements
That really gets my goat
I look for silver linings
But you`re rotten to the core
I`ve had just about all I can take
You know I can`t take it no more
Gotta gut feeling…..

Thanks Dad for introducing me to Pearl S.Buck

Posted by Jon Downes at 3:44 PM No comments:

Posted by Jon Downes at 3:42 PM No comments:

CRYPTOLINKS: The rise and rise of the flying reptiles

Pterosaurs, flying reptiles from the time of the dinosaurs, were not driven to extinction by the birds, but in fact they continued to diversify and innovate for millions of years afterwards.
A new study by Katy Prentice, done as part of her undergraduate degree (MSci in Palaeontology and Evolution) at the University of Bristol, shows that the pterosaurs evolved in a most unusual way, becoming more and more specialised through their 160 million years on Earth. The work is published in Journal of Systematic Palaeontology.

HAUNTED SKIES: Funeral of a colleague

http://hauntedskies.blogspot.com/2011/07/funeral-of-colleague.html
Posted by Jon Downes at 12:43 PM No comments:

On this day in 356 BC the Temple of Artemis, one of the 7 wonders of the world, was burned down by a man named Herostratus in an attempt to gain fame and notoriety. The authorities punished him by not only executing him but placing a ban on anyone mentioning his name.
And now the news:

They call him Cuban Pete:
http://www.youtube.com/watch?v=GJej6kCgxVM
Posted by Jon Downes at 12:41 PM No comments:

I went ahead and passed the next blog through, one about my longstanding theoretical accounting for Merfolk reports. I had mentioned it on the CFZ blog before but this is my first posting of it in Blog form: