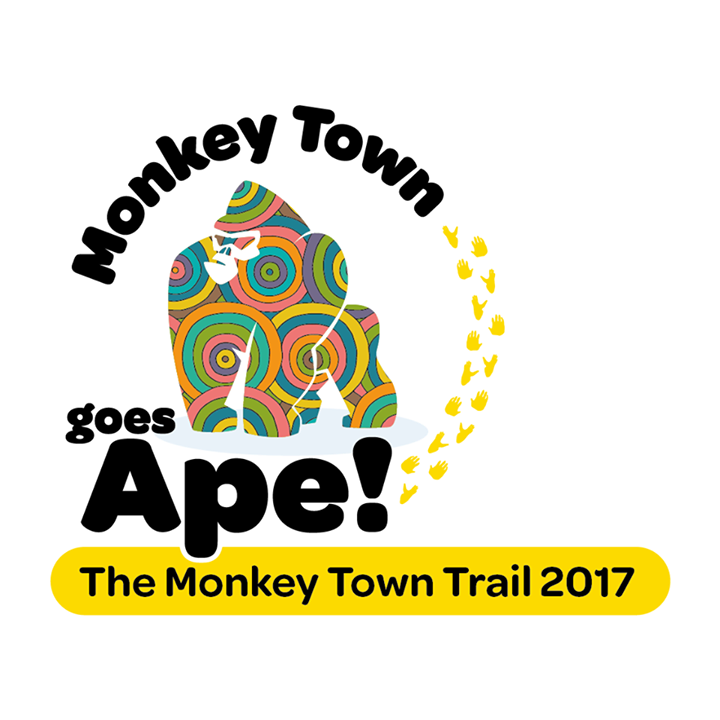 Some of you may remember my previous blog post back in 2009 about the origins of Heywood's unofficial moniker of 'Monkey Town.' Well, last weekend, your Greater-Mancunian correspondent is happy to report, monkey business hit an all-time high with the first annual Monkey Town Parade.

In the week before the festivities, nine life-size gorilla statues were installed at various locations around the town.

Helen Johnson, of the Heywood Advertiser, reports that 'Hundreds of people' turned out for the inaugural event on Saturday, 6th May, which included a three-mile trail to visit all nine gorillas to make rubbings of their brass plaques - please, no jokes about monkeys and brass; it was actually quite a warm day.

There is a also a competition running until the 25th August where those who collected all nine brass-rubbings can win one of the gorillas.

Each sculpture was designed by local primary school children; members of the Heywood in Bloom organisation; PossAbilities, a disability charity; and created by artists. PossAbilities, who organised the event, also held a garden party at their premises, with 500 attendees.

If you're in or around Heywood you can hunt for the apes until 25th August when they will be removed from their current locations and brought together for a 'gathering of the apes.'
Posted by C-E B at 11:42 AM No comments:

BigfootTimes
In August of 1978 a small town in eastern Ohio was thrust into the spotlight when a local family sighted a Bigfoot in the woods behind their home.

There must be something interesting to say about today, but I can't think of it. I did nearly all of the magazine late last night, and so it is now with Corinna for her to do her inimitable thing with it. Roll on the weekend. And - btw - Corinna has just been bitten by a water shrew she was rescuing.

And now, here is the news:

And so, in this week's phenomenally rising issue, Jeremy talks to Richard Strange in another world exclusive, Graham brings us Hawkwind news, Richard writes about David Nelson, Doug critiques the best gigs of the 1970s, Alan examines the trippier end of Turkish music and Jon raves on about Kipling.

And there are radio shows from Mack Maloney, Friday Night Progressive, and Strange Fruit. We also have columns from all sorts of folk including Roy Weard, Mr Biffo, Neil Nixon and the irrepressible Corinna. There is also a collection of more news, reviews, views, interviews and pademelons outside zoos (OK, nothing to do with small marsupials who have escaped from captivity, but I got carried away with things that rhymed with OOOOS) than you can shake a stick at. And the best part is IT's ABSOLUTELY FREE!!!

* Jon Downes, the Editor of all these ventures (and several others) is an old hippy of 57 who - together with a Jack Russell called Archie, an infantile orange cat named after a song by Frank Zappa, and two half grown kittens, one totally coincidentally named after one of the Manson Family, purely because she squeaks, puts it all together from a converted potato shed in a tumbledown cottage deep in rural Devon which he shares with various fish. He is ably assisted by his lovely wife Corinna, his bulldog/boxer Prudence, his elderly mother-in-law, and a motley collection of social malcontents. Plus.. did we mention Archie and the Cats?
Posted by Jon Downes at 3:30 AM No comments: