Due to continuing family concerns, Karl hasn't been blogging on ShukerNature as frequently as usual, but here is a clickable list of links to his most recent posts in case you may not have seen all of them:

Fawcett's Double-Nosed Andean Tiger Hound - A Canine Anomaly Not To Be Sniffed At! (20 February 2013)

I was thinking of writing a lengthy post about climate change denial being completely unscientific nonsense, but then geochemist and National Science Board member James Lawrence Powell wrote a post that is basically a slam-dunk of debunking. His premise was simple: If global warming isn’t real and there’s an actual scientific debate about it, that should be reflected in the scientific journals.

He looked up how many peer-reviewed scientific papers were published in professional journals about global warming, and compared the ones supporting the idea that we’re heating up compared to those that don’t. What did he find? This:


Image credit: James Lawrence Powell
Oh my. Powell looked at 13,950 articles. Out of all those reams of scientific results, how many disputed the reality of climate change?
Twenty-four. Yup. Two dozen. Out of nearly 14,000.
Now I know some people will just say that this is due to mainstream scientists suppressing controversy and all that, but let me be succinct: That’s bull. Science thrives on dissenting ideas, it grows and learns from them. If there is actual evidence to support an idea, it gets published. I can point out copious examples in my own field of astronomy where papers get published about all manners of against-the-mainstream thinking, some of which come to conclusions that, in my opinion, are clearly wrong.
So let this be clear: There is no scientific controversy over this. Climate change denial is purely, 100 percent made-up political and corporate-sponsored crap. When the loudest voices are fossil-fuel funded think tanks, when they don’t publish in journals but insteadwrite error-laden op-eds in partisan venues, when they have to manipulate the data to support their point, then what they’re doing isn’t science.
It’s nonsense. And worse, it’s dangerous nonsense. Because they’re fiddling with the data while the world burns.
Read on...
Posted by Jon Downes at 4:24 PM 2 comments: 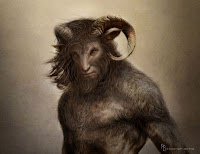 Another jolly, if rather chilly day. Everyone (well, Corinna and to a lesser extent me) has been bitten by the spring cleaning bug.  Next week our visitors start to arrive, and we shall have a steady stream of Forteans, musicians, artists, and general weirdos coming through for the next few months. When I was young 'My Family and Other Animals' was one of my favourite books (it still is), but I always aspired to be the arty and acerbic Larry with his constant stream of peculiar intellectual friends and his bitchy sense of humour rather than the young Gerald Durrell with his matchboxes full of scorpions. I am slowly getting back to normal, but a lot of my time is being spent just learning how to use my new Windows 8 computer. I have new hardware and software with which to get to grips and a selection of hard taskmasters bullying me into getting things done. Ho Hum...

*  Jon Downes, the Editor of all these ventures (and several others) is an old hippy of 53 who - together with his orange cat (who is currently on sick leave in Staffordshire) and a not very small orange kitten (who isn't) puts it all together from a converted potato shed in a tumbledown cottage deep in rural Devon which he shares with various fish. He is ably assisted by his lovely wife Corinna, his bulldog/boxer Prudence, his elderly mother-in-law, and a motley collection of social malcontents. Plus.. did we mention the orange cats?
Posted by Jon Downes at 1:07 PM No comments:

On this day in 1813 the David Livingstone was born and in 1821 Richard Francis Burton (not to be confused with the other Richard Burton) was born. Both men were explorers who searched for the source of the River Nile.


Ok, so this is both pants-wettingly scary and stupid:
http://www.youtube.com/watch?v=FVFsiJBSQps
Posted by Jon Downes at 1:06 PM No comments: