I have been having trouble with Blogger recently and it evidently stems from a general Gmail shutdown on Tuesday: My blogger account has not functioned properly the past several days and when I attempt to put up new blogs, both photos and text tends to disappear. I have however managed to get a blog posting in Frontiers of Anthropology to go through:

As noted it is a reprint from the Quarterly Journal of Military Technology and it may be taken down if the author objects. I thought it fit in very well with a topic we have been discussing on the blog for some time now (the use of giant warriors in warfare in Ancient times)

Which (much as my label for Frontiers-of-Zoology) is meant to imply some more flexibility than just being a "Cryptozoology Blog" Tyler has been having some of the same technical problems as I have been having but his two most recent postings are:

With a third part to follow. I should mention that I recently posted an entry on the more "Human" type of Skunk Ape (as opposed to Apelike) and I was very much impressed how strongly some of the witness' drawings resembled the "Iceman"

PS, I still am not getting all of my emails to come into my inbox yet and I have been cut off from my guest bloggers because of it.
Posted by Jon Downes at 1:39 PM No comments:

Its Friday in Gonzoland, and once again there are some pretty cool things on the Gonzo blog:

First up is an exclusive glimpse at what legendary film-maker Tony Palmer is working on:
http://gonzo-multimedia.blogspot.com/2012/04/tony-palmer-brave-new-film.html

And whilst on the subject here is the trailer from one of his earliest films 'All My Loving' (1968) featuring Jimi Hendrix and a smashing performance of 'We're Going Wrong' by Cream:
http://gonzo-multimedia.blogspot.com/2012/04/tony-palmer-all-my-loving.html

There is an exclusive slice out of the new live album by Rick Wakeman:
http://gonzo-multimedia.blogspot.com/2012/04/rick-wakeman-new-live-album.html

We have a promo video for the new tour by Jon Anderson:
http://gonzo-multimedia.blogspot.com/2012/04/jon-anderson-tour-promo.html

We have another rather groovy collaboration from Mimi Page:
http://gonzo-multimedia.blogspot.com/2012/04/even-more-from-mimi.html

And last, but by no means least, some exclusive screen shots from Michael Des Barres' new video:
http://gonzo-multimedia.blogspot.com/2012/04/michaeldes-barres-exclusive-screen.html

This is like being the ringmaster on my very own episode of 'Top of the Pops'. Oh yes, they axed that years ago didn't they...
Posted by Jon Downes at 11:01 AM No comments:

On this day in 1926 Warner Bros and Western Electric publicly announced the new process they had developed called Vitaphone, which would add sound to movies.

One of the first feature films to utilise Vitaphone was Al Jolson's 'The Jazz Singer' (Not that I condone the casual racism here but it WAS the first talkie so there you have it):


It takes a long time to do and is a fairly tedious task so I am not promising that they will be done each day, but I will do them as regularly as I can. JD

Big cat shocker on Berrow beach for Sheri
This is The West Country
“They must have picked up the scent because about 30ft away stood a big cat. It was jet black and it looked like a leopard in shape and size and stood out from the sand. It froze and stared at us. “We waited for our eyes to adjust at first to make sure ...

A Somerset sighting - the first for a while - by a girl named after a Spanish fortified wine. And now more from Gloucestershire:

Fur left behind by 'panther-like animal' to be analysed
This is Gloucestershire
Mount View Drive resident Keith Baker has collected a sample of hair left by a large panther-like animal he thinks may be an elusive big cat. He has passed the fur, collected from barbed wire in the field, to big cat tracker Frank Tunbridge in a bid to ...

And another outing for the story about Scottish police reports:

Police receive 140 big-cat sightings - Environment - Scotsman.com
ALMOST 140 sightings of big cats have been reported to police forces in Scotland over the past five years, the latest figures have revealed.

And back to Gloucestershire.

This is Gloucestershire
FOOTAGE of a beast seen roaming the fields of Winchcombe could be a hybrid species of giant cat. Big cat tracker Frank Tunbridge went to see for himself what was prowling through land around Mount View Drive in Winchcombe. And residents Keith Baker and ...

MYSTERY BIG CAT NEWS FROM AROUND THE WORLD

Behold, the world's first known "strawberry" leopard
io9
The big, pink-hued cat — which makes its home at South Africa's Madikwe Game Reserve — is affected by erythrism, a poorly understood genetic condition that causes him to either overproduce red pigments or underproduce dark pigments in his coat.

Spain saves endangered European cat
The Magazine
By mageditor
Conservationists in Spain were forced to do something drastic to keep their beloved big cat alive! Conservationists rounded up 100 lynx and have been breeding them in special centers. Now, they're being released back into the wild for the ...

Endangered species: Snow leopard shot dead by villagers in Kashmir
The Express Tribune
Kashmir is home to two of the world's big cats, the common leopard (Panthera pardus) and the snow leopard (Uncia uncia), a cat so secretive few have been privileged enough to get a glimpse of it in the wild. A businessman of the area, Waseem Khursheed, ...

Wanted to let you know about the third annual “International Obscura Day”, (obscuraday.com), a day of unusual local explorations, all over the world, presented by Atlas Obscura, an online travel guide to curious and unusual places. On April 28th, Loren Coleman, from the the International Cryptozoology Museum, will be giving a lecture to mark the 35 anniversary of the Dover Demon investigation.

Thought you and your readers would be interested in it.

Thanks,
Heather
Posted by Jon Downes at 12:15 AM No comments:

Email ThisBlogThis!Share to TwitterShare to FacebookShare to Pinterest
Labels: events 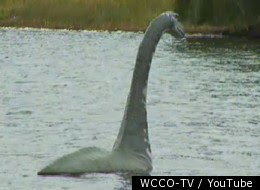 This is one lake monster that knows a thing or two about self-promotion -- it uses Twitter and Facebook to let people know where it's going to show up.

Say hello to Minne, the Minneapolis version of the Loch Ness Monster. Sort of.

With summer not too far off, a yearly phenomenon is rearing its long slimy neck out of several Minneapolis area lakes. And it looks remarkably like a famous 1934 photo of what is said to be Scotland's legendary Loch Ness Monster.

But Minne -- sorry to deflate all true monster believers everywhere -- is, in fact, a work of art that made its first appearance in Lake Harriet back in 2009, according to WCCO-TV.