In a nutshell: pharmaceutical company creates GM snakes because their venom has been found to cure cancer but the ordinary snakes aren't producing the stuff quickly enough. The snakes escape (admittedly I don't know how as I was making cuppasoup) and terrorise a nearby island called Eden Cove - cue plenty of eye-rolling.

Eden Cove is idyllic till the killer vipers arrive: their first victims had been enjoying their honeymoon and reluctant to return home and "leave that view." They were eaten alive in their tent while doing what newlyweds do....

Then the man who left his wife for his secretary finds the secretary eaten alive in their bed after she thinks the snake crawling up her leg is her lover's caresses! I began to wonder if there was some kind of trend developing because the ex-wife of said lover is, along with her own new lover, next on the menu. I half-expected there to be characters called Eve, Adam and God, but apparently the filmmakers didn't want to be too biblical.

Having said that, one of the surviving main characters did own a garden centre. By the end she had fallen in love with the island's saviour, a former US army marine and doctor to boot; big surprise.

Needless to say, it wasn't all that good a film, though if you just want a little background noise for whatever reason, I reckon it would do the job well.
Posted by C-E B at 6:52 PM No comments:

SUMATRA HAIR SAMPLES: The dialogue between the CFZ and the person calling himself "The Highland Tiger" continues..

'Thanks for posting my thoughts. I did wonder if the DNA testing had destroyed all the samples. Some people might say, "yeah yeah here we go, all proof has been destroyed etc", but in this instance I don't think this is the case. It is one of the drawbacks of DNA testing that samples are detroyed in the very nature of the test. That's life as Esther would say!

I do hope it is not the latter, because if it is, then you must admit that is very poor scientific practice. I would expect, with microscopic equipment worth a small fortune, that the ability to photograph specimens would be a necessity.

If you do have good microscopic images of the hairs, then why not send those to some orangutan experts, even if it is just to get a second opinion.

After all, a second, third or even fourth opinion cannot hurt, and will only increase the credibility of your findings.

For the record, I do feel that of all cryptids in the world, the orang pendek is probably the most likely to be a real creature. But you do need to investigate every avenue in order to rule out the possibility of those hairs being from a known species.'

'The microscope I used were set up to record pictures of everything I put into it during the WW, but it is back with Olympus by now, and I am not sure whether they have the pictures or whether the production company has them. But I will check and let you know - and I will try and contact various primate experts I know.'
Posted by Jon Downes at 5:02 PM 4 comments: 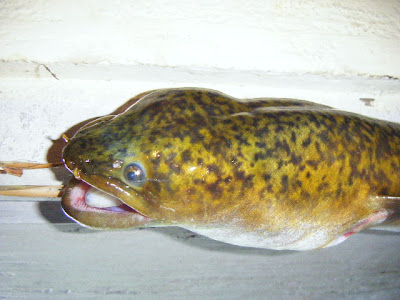 We thought that this was a swamp eel (Symbranchus). The India expedition bought it, photographed it, and then ate it. However, as Max points out, Symbranchus spp don't have these nasal tubercules...
Posted by Jon Downes at 12:11 PM 4 comments: 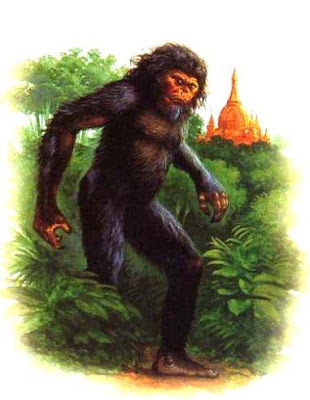 It seems that generally there is a larger and a smaller type of 'wildman' throughout southeast Asia, and they both correspond to the types in India, Tibet and China as well. In other words, the 'wildmen' of Vietnam, Cambodia and so on are contiguous with the Chinese 'wildmen' and the Indian 'wildmen' (such as the ones recently sought by a CFZ expedition) Ivan Sanderson identified the larger type as the Tok and Kung-Lu in southeast Asia, but they are the same as the Shan (and variants) in South China and North Vietnam, as well as the larger type of "Yeti", and the larger type of Chinese 'Wildman'

Recently I was going over my records of the Vietnamese wildmen, or Nguoi Rung, as well as the possible surviving mainland orangutans, for which I make a distinction and identify with the Da Nhan and the Americans' "Rock Apes." From the information given to me by my informants (and just confirmed this morning by a message from certain Vietnamese cryptozoological authorities), the strictly hominid Vietnamese wildmen (including the Nguoi Rung) come in a larger and a smaller size; the smaller ones about five feet tall, broadly 4'6" to 5'6" and more tightly with average heights from 4' 8" to 5'4" (females on the low end of height estimates and males at the higher end) with tracks frm 6 inches to 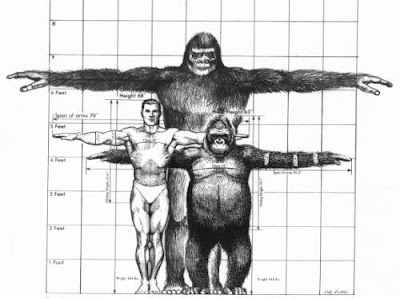 9 inches or usually 8 inches long; and then the larger 'wildmen' that are six feet and over leaving tracks that are a foot long and over. The range in estimates would then be heights up to an estimated 8'6" and a tighter average of height estimates from 6' 9" to 7' 6" and tracks reported as 12 to 16 inches long. That is on the smaller end of Sasquatch tracks and height estimates but probably comparable with the Tok and Kung-Lu.

Against this I feel I can say now that the rock apes would more usually be between three feet and five feet tall, comparable to a chimpanzee and closely resembling one otherwise; and in this description it closely matches the Yeh-Teh, Yeren and ibagon of the more common sort. It is also likely to be the surviving mainland population of 'fossil pongo', somewhat larger than an orangutan and adapted to living on the ground more (without the more specialised traits for climbing that have been acquired by orangutans proper). The colouration of all types is highly variable but ordinarily some shade of brown; the 'wildmen' are more ordinarily dark or blackish, although white ones are regularly reported, and the apes more usually reddish brown. I should also stress that the reported appearances of the various types is extremely similar within the types: the Almas type is very similar to the smaller Vietnamese wildman or to the Rakshi-Bompo of the Himalayas and their tracks are very similar; the Sasquatch types are always described as being much like the American Sasquatch in appearance and in the size and shape of the tracks; and the rock apes or "Bigmonkey" (Mahalangur) types are illustrated as generally being extremely similar to a chimpanzee or orangutan, and including whether the same type of creature is called a Yeti or a Hibagon.

It would be helpful if we had more reports or tracks to go on, but the 'ape' tracks are generally consistent and directly in opposition to the human-like 'wildman' tracks wherever they might appear. And of the entire series, the Shipton Yeti tracks stand out not only for having the unusually large second toe, but also for being very much larger than the norm for the entire series otherwise (something like 150% larger in both length and width than usual)

On the second illustration, "Yetiscale" from the Cambodian Bigfoot site, the smaller ape does illustrate a good representation of the Yeti as commonly reported, smaller but bulkier than a regular human being. That is the exact description which I heard independantly from Vietnamese informants about the Da Nhan and from American soldiers about the Rock Apes.
Posted by Jon Downes at 12:04 PM 1 comment:

JOHN CHAPMAN: Monster in my Aquarium (From the Bug Club email list) 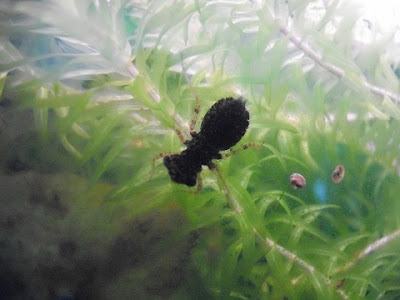 I have a monster living in my house. And I've not even dated it. I have a small indoor heated aquarium, which fits within a picture frame and hangs on the wall of my living room. The tank is about 2.5 feet long by about 18 inches high by about 2 or 3 inches deep, and is fully enclosed in a wooden frame. It contains guppies and a lot of weed and snails. A couple of weeks ago I saw what I thought was a spider drowning, thrashing/swimming in the tank.

I tried to fish it out but it buried itself in the gravel and I lost it. A few hours later I was amazed to see it sitting in the weed. Upon closer examination I could see it has six legs, clearly has a head, abdomen and thorax, has a laterally flattened body and its abdomen was pulsating, presumably to facilitate breathing. It was then about 10mm long but is now about 15. No fish seem to be disappearing and I have a number of baby guppies, which are smaller than it is.
But I suspect it is eating snails. I assume it is an insect larva and was probably introduced on the weed, possibly as an egg. But since it is a tropical tank I have no idea whether the weed is of native or foreign origin. Obviously it would be irresponsible to release a non-native insect species into the wild – although at this time of year (end of Nov) it would probably mean instant death even if it is native. I live in North Wales, UK. Has anyone got any idea what it is? What can I do with it?
Posted by Jon Downes at 12:04 PM 2 comments:

On this day in 1922 Howard Carter opened the tomb of Tutankhamun to the public.
And now, the news:

Baby elephants always go down well:
http://www.youtube.com/watch?v=gtIz1u8g1F0
Posted by Jon Downes at 11:43 AM No comments: