Mysterious Universe
The Loch Ness Monster: just about everyone has heard of it. A large number of people claim to have seen the long-necked, humped leviathan of the ...

Omny.fm
Nessie” is apparently both the 'most famous Scot' and a $54m tourism industry, but does a mystery monster really reside in Loch Ness? Sonal has ...
Posted by Jon Downes at 11:47 AM No comments:

For those of you not in the know, at the beginning of each month we send out a newsletter to all members of the CFZ. The most recent (which went out a few minutes ago) included articles on OTT, giant rays, new books from Lars Thomas and Rob Cornes, an eyeless swamp eel, strange fish, lake monster study group, Patreon, Notes and Queries etc.

If you want to view a sample issue click here: http://tinyurl.com/pw7rw9l
Posted by Jon Downes at 11:34 AM No comments: 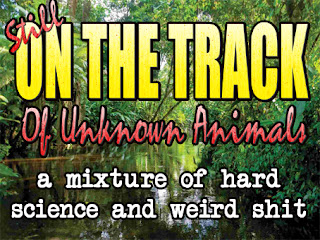 Search for Bigfoot in Virginia continues with local researchers

The Breeze
Encounters like Martlock's husband's are common among Bigfoot researchers and believers. Although they may not physically see a sasquatch in the ...

Seeking Sasquatch: Investigator Believes Bigfoot Lurks in Uhwarrie Forest
WFMYNews2.com
That quest for clues often takes Bigfoot enthusiasts to Montgomery County. Nestled in the wilderness is an outlier on the outskirts of civilization -- the ...

The Scientist Grover Krantz Risked It All…Chasing Bigfoot
Smithsonian
Today, more than a decade after his death, Krantz is known in various circles as an eccentric anthropologist. . . who believed in Bigfoot.
Idaho Falls native looks for Bigfoot on her new podcast - Idaho State Journal
Full Coverage
Posted by Jon Downes at 3:30 AM No comments:

ON THIS DAY IN -  1512 - Michelangelo's paintings on the ceiling of the Sistine Chapel were first exhibited to the public.
And now some more recent news from the CFZ Newsdesk