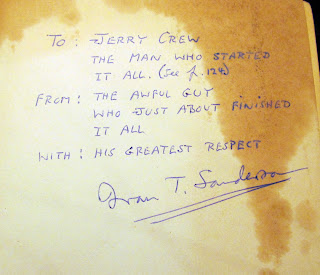 While filming volume two of Bigfoot Road Trip, I was treated by seeing (and holding and caressing) many lost treasures of bigfoot history. Among them was this little gem.

CRYPTOLINK: Searching for a monster

LAKE CITY, Minn. (KTTC) -- Most of us have probably heard of the Loch Ness Monster. Legend has it that we have one of those swimming in the depths of Lake Pepin right here at home-- and two national TV shows sent crews to Lake City this week to tell the story.

The Travel and Discovery Channels have gotten word of a monster we call Pepie and now Lake City will be featured nationally for it. NewsCenter's Jonathan Kegges and photographer Dymanh Chhoun followed the Travel Channel crew as they took to Lake Pepin by boat.

The story was passed down from generation to generation by Native Americans
"We couldn't see what was making it, but it was something very big right beneath the surface of the water, said Pearl of the Lake Captain Larry Nielson.
Read on...
Posted by Jon Downes at 1:52 PM No comments:

www.gonzomultimedia.co.uk/about.html
I had a doctor's appointment mid morning so, although I did some bloggystuff before I went, I am doing the vast majority of it now. Graham and I were on TV last night, and although I haven't seen it yet (and quite possibly won't bother) apparently it was OK. Weirdly, as I was leaving the consulting room and limping down the corridor a pretty young nurse came rushing up to me and gasped "Oooh you were on TV last night, this is so exciting!" I muttered something appropriate and signed the proffered NHS appointment pad with my name and a scribbled picture of a chicken (which probably confused her). In these decadent days, Television is the new God, and anyone who appears on TV (even for ten minutes talking about 'The Great Devon Mystery' of 1851, is fleetingly endowed with this neodivinity. I really find it most disturbing. But it is only a month until Christmas and I always find myself becoming more elderly and cantankerous as the old year shambles to a halt. Bah! PS If anyone wants to see it, it is on the ITV version of iPlayer, and it is 'Mystery Map Episode 2'. If anyone can actually bootleg it for me, I would be rather pleased...
Another visit to our old friend Thom the World Poet
http://gonzo-multimedia.blogspot.com/2013/11/thom-world-poet-daily-poem_2585.html
Today's Track of the Day is by The Radio Stars
http://gonzo-multimedia.blogspot.com/2013/11/the-gonzo-track-of-day-radio-stars.html
Steve Howe – Homebrew 5 (2013)
http://gonzo-multimedia.blogspot.com/2013/11/steve-howe-homebrew-5-2013.html
Rick Wakeman Expands Journey To The Centre Of The Earth Tour Plans
http://gonzo-multimedia.blogspot.com/2013/11/rick-wakeman-expands-journey-to-centre.html
Fairport announce first festival acts for Cropredy Convention
http://gonzo-multimedia.blogspot.com/2013/11/fairport-announce-first-festival-acts.html
Music Premiere: XNA – The Flying Dutchman (featuring Billy Sherwood)
http://gonzo-multimedia.blogspot.com/2013/11/music-premiere-xna-flying-dutchman.html
*  The Gonzo Daily is a two way process. If you have any news or want to write for us, please contact me at  jon@eclipse.co.uk. If you are an artist and want to showcase your work, or even just say hello please write to me at gonzo@cfz.org.uk. Please copy, paste and spread the word about this magazine as widely as possible. We need people to read us in order to grow, and as soon as it is viable we shall be invading more traditional magaziney areas. Join in the fun, spread the word, and maybe if we all chant loud enough we CAN stop it raining. See you tomorrow...

*  Jon Downes, the Editor of all these ventures (and several others) is an old hippy of 54 who - together with his orange cat (who is currently on sick leave in Staffordshire) and two very small kittens (one of whom is also orange) puts it all together from a converted potato shed in a tumbledown cottage deep in rural Devon which he shares with various fish, and sometimes a small Indian frog. He is ably assisted by his lovely wife Corinna, his bulldog/boxer Prudence, his elderly mother-in-law, and a motley collection of social malcontents. Plus.. did we mention the orange cat?
Posted by Jon Downes at 12:46 PM No comments:

On this day in 1968 the author Enid Blyton died. Blyton could churn out children's books at a phenomenal rate, roughly 800 books in about 40 years, which is an achievement in itself.
And now the news:

One of Enid Blyton's most famous creations was Noddy, which told of a taxi driver's living nightmare surrounded by ultra terrestrials and animate toys quite clearly possessed by the spirits of dead children. Here he is in an adventure involving a very demanding pink pussy:

http://www.youtube.com/watch?v=Je7SVdooxFs
Posted by Jon Downes at 9:47 AM No comments: