Posted by Liv McCarthy at 2:00 PM No comments:

The woodwose, or wild man, is believed to live in Yellowham Woods in Dorchester

Dorset Echo
Legends of large, hairy, bipedal creatures are prevalent amongst many different cultures around the world, hence Bigfoot having so many different ...

Possible Proof That Bigfoot Exists in Colorado, or Just Another Hoax?

99.9 The Point
The legend of Bigfoot existing in Colorado has been a rumor that has gone on for hundreds of years, and one man in the state continues to try to prove ...

EIN News (press release)
There have been a cornucopia of stories about the creature known as Bigfoot coming from this area. Some of these stories have been passed down ... 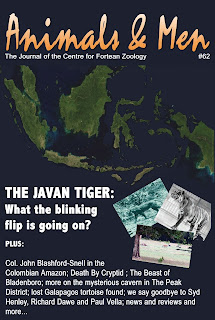 Since 1994, Animals & Men has been the world’s premier cryptozoological periodical, covering all aspects of the study of unknown animals. Appearing in a variety of print formats over the years, Animals & Men can now be purchased in two formats, as a printed paperback or as a Kindle ebook. In addition, a FREE “flipbook” digital version is available to read online.
Yes, boys and girls, issue 62 of Animals and Men is now available at:

ON THIS DAY IN - 1469 - Ferdinand of Aragon married Isabella of Castile. The marriage united all the dominions of Spain.
And now some more recent news from the CFZ Newsdesk