One of those said she was lucky enough that night to catch a glimpse of the creature.

Teresa uses only her first name, as do many Bigfoot believers, for fear of ridicule. She is an established spiritual medium and animal communicator from New Jersey.

She and her group had been walking the trails near Cave Run Lake for a few hours Saturday night and were not very deep into the woods, she said, when she heard grunting and growling.

Her group stumbled upon the creature as he was trying to kill a deer. He was interrupted by bright lights shining in his face.

Posted by Jon Downes at 7:19 PM No comments:

Yesterday was one of those days that I prefer to gloss over. I felt terrible, and slept most of the day. Today, however, is shaping up to be quite a nice one, with the lovely Ms H due to arrive later on, and yours truly feeling remarkably sane and well.

The Gonzo Daily is a two way process. If you have any news or want to write for us, please contact me at jon@eclipse.co.uk. If you are an artist and want to showcase your work, or even just say hello please write to me at gonzo@cfz.org.uk. Please copy, paste and spread the word about this magazine as widely as possible. We need people to read us in order to grow, and as soon as it is viable we shall be invading more traditional magaziney areas. Join in the fun, spread the word, and maybe if we all chant loud enough we CAN stop it raining. See you tomorrow...
Posted by Jon Downes at 2:09 PM No comments:

The hunt for British Big Cats attracts far more newspaper-column inches than any other cryptozoological subject. There are so many of them now that we feel that they should be archived by us in some way, so we should have a go at publishing a regular round-up of the stories as they come in.
In September 2012, Emma Osborne decided that the Mystery Cat Study Group really deserved a blog of its own within the CFZ Blog Network.
Posted by Jon Downes at 1:10 PM No comments:

Confirmation on the shape of the reported Giant Lizard tracks from some unlikely sources:
http://frontiersofzoology.blogspot.com/2012/09/faux-alligator-tracks.html

Notice of a new species of African monkey:
http://frontiersofzoology.blogspot.com/2012/09/new-african-monkey-species.html

And some estimations on the strength of a Sasquatch
(Unfortunately long-delayed request article):
http://frontiersofzoology.blogspot.com/2012/09/the-strength-of-sasquatch.html
Posted by Jon Downes at 1:10 PM No comments:

On this day in 1909 Sir Peter Scott was born. Scott founded the Wildfowl and Wetlands Trust (CFZ fanboys will remember the Martin Mere WWT was the location for the “Monster of the Mere” published by CFZ Press) and gave a Latin name to the Loch Ness Monster.

Of course Scott's name for Nessie is still unofficial because... 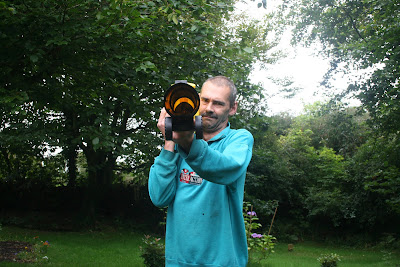 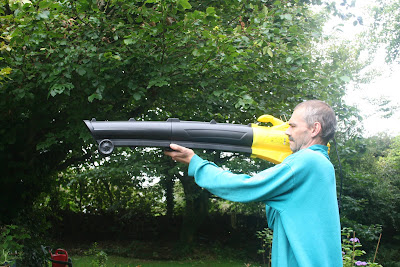 The CFZ has a new leaf blower, and I think it is obvious that Graham was once a dab hand at playing Doom
Posted by Jon Downes at 9:27 AM 1 comment:

This weekend (September 14, 2012) is the 10thanniversary of the Mothman Festival in Point Pleasant, West Virginia. I am pleased to be part of the speaker lineup again this year, and if you are able I highly recommend attending this freefest. Mothman’s fame may be in WestVirginia, but Canada certainly is part of this creature’s world itinerary. Sightings occur worldwide, and have for avery long time. Read on...
Posted by Jon Downes at 9:24 AM No comments: