MUIRHEAD`S MYSTERIES: A SEA MONSTER IN HONG KONG IN 1880 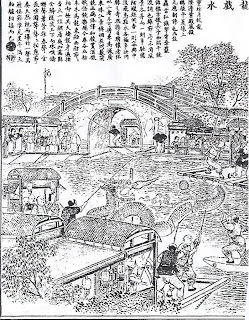 I came across another interesting Hong Kong cryptozoology story the other day via the excellent Trove online database (based in ) , dated from September 22nd 1880. It was published in the Gippsland Times ( state.) Interestingly, there is a story from Tai Hang village near on the  north side of island  in the same year of a sea monster or dragon which, when it appeared, stopped the course of a plague, thus saving the villagers. The image below from  a web site  illustrates this Tai Hang story.  However, the events below took place in then a small fishing village on the south side.

The original sea serpent, or one of his family, appears to have been caught near . The Press (1) reports that on  1st July  a marine monster was captured in the dock at and placed in the City Hall for exhibition. It is called by the Chinese the “devil fish.” and apparently well deserves its name. It weighs about three thousand pounds, and fifty coolies were required to carry it. The body is about seven feet in diameter. The total measurement from fin to fin is fifteen feet. It has ears a foot and a half long, and its mouth is two feet four inches in width. The fish attains an enormous size in the , and is sometimes seen on the surface of the water asleep. One of the Messageries (?) Maritime steamers going north from Hong Kong some time ago ran into one, and the officers of the ship thought she was aground as the vessel was brought up to nearly a dead stop; on another occasion one was captured asleep and made fast, and although the strongest hoisting gear in the ship was rigged, before the fish was lifted half out of the water – so great was the weight – the tackle broke and the attempt to secure the monster had to be abandoned. (2)

A brief search in other online old newspapers didn`t reveal any concrete understanding of the “devil fish”. There were stories of rays off S.America with 22 foot wide “fins” from tip to tip and giant octopi though. I believe the oar fish can be excluded.

One of the projects that I have been working on for the last few years is an analysis of the thylacine photographs by Harry Burrell. There is presently a debate surrounding the authenticity of the images, but I believe that I have strong enough evidence to prove that they are genuine.
The debate surrounding the images was triggered by a report published in 2005 in Australian Zoologist magazine, in which animal studies writer Carol Freeman put forward her belief that the images had been staged using taxidermied specimens. I have great respect for the work of Carol Freeman, who has an understandably high and well deserved international reputation as a thylacine researcher. But unfortunately I strongly disagree with her findings, I think that it is very important that the case for the authenticity of the images be put forward.

Its wednesday and the sun is doing its best to shine. Graham is still doing arcane things with the rayburn oil feed (which is still refusing to work properly) and so my office is still full of the creatures that usually live in the kitchen. I did a lovely interview with Helen McCookerybook yesterday (which will be up by the weekend) and we have also finished most of the work on Nick Redfern's book about British BHM phenomena. All we need now is the cover...

I think Peter McAdam is one of the funniest people around, and I cannot recommend his book The Nine Henrys highly enough. This week we shall be running a series of Henrybits that are not found in his book about the nine cloned cartoon characters who inhabit a surreal world nearly as insane as mine..
http://gonzo-multimedia.blogspot.com/2012/11/henrywood-babylon.html

I am very fond of Erik Norlander. Not only is her a very talented musician and composer, but he is a damn nice guy as well. It is always a pleasure to chat to him, because we can talk for hours on a variety of musical and philosophical subjects such as curry (for example). My dear wife removed our long discussion about Vindaloo from the current interview on the grounds that it was completely off topic and not interesting to anyone apart from me and Erik, and as she is the poor dear who has to transcribe these chats, I have to do what I am told...
http://gonzo-multimedia.blogspot.com/2012/11/exclusive-erik-norlander-interview.html

I have just found this snippet about Jon Anderson's forthcoming Antipodean visit online. Just one thing - since when has Accrington been in the Emerald Isle?
http://gonzo-multimedia.blogspot.com/2012/11/jon-anderson-shock-exclusive-its.html

Our daily visit to the home of Thom the World Poet
http://gonzo-multimedia.blogspot.com/2012/11/thom-world-poet-daily-poet_4774.html

The 5th in the series of video blogs from the current Jefferson Starship World Tour, by the lovely Kathy Richardson
http://gonzo-multimedia.blogspot.com/2012/11/another-video-log-from-cathy-richardson.html

Judy Dyble is on the radio, and she kindly dropped Gonzo Daily a note to tell us all about it
http://gonzo-multimedia.blogspot.com/2012/11/a-note-from-judy-dyble.html
The Gonzo Daily is a two way process. If you have any news or want to write for us, please contact me at jon@eclipse.co.uk. If you are an artist and want to showcase your work, or even just say hello please write to me at gonzo@cfz.org.uk. Please copy, paste and spread the word about this magazine as widely as possible. We need people to read us in order to grow, and as soon as it is viable we shall be invading more traditional magaziney areas. Join in the fun, spread the word, and maybe if we all chant loud enough we CAN stop it raining. See you tomorrow...
The Gonzo Daily is - as the name implies - a daily online magazine (mostly) about artists connected to the Gonzo Multimedia group of companies. But it also has other stuff as and when the editor feels like it. The Editor is an old hippy of 53 who - together with his orange cat - puts it all together from a converted potato shed in a tumbledown cottage deep in rural Devon. He is ably assisted by his lovely wife Corinna, his bulldog/boxer Prudence, and a motley collection of social malcontents. Plus.. did we mention the orange cat? 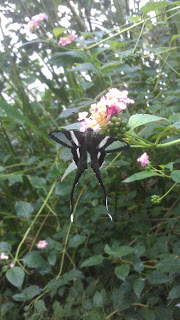 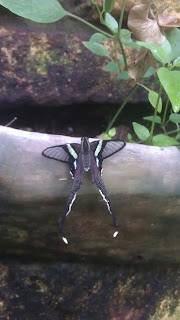 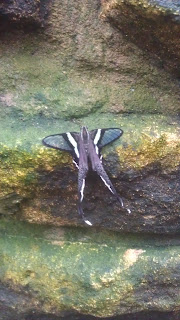 We at Stratford-upon-Avon Butterfly Farm are pleased to announce the emergence of the Green Dragontail Butterfly. The Dragontails - Lamproptera spp are a beautiful and unusual genus of Swallowtail butterflies (family-Papilionidae) found in South Asia and Southeast Asia. The genus is actually made up of two species, L. meges and L. curias  with the former taxon being divided up again into at least ten subspecies.


Having much smaller wing size to body length ratio, the Dragontail butterflies display an unusual whirring flight pattern when airborne, they rapidly beat their wings and dart back and forth in a manner similar to that of Dragonflies using their long tails as rudders.

In general the two species are not considered rare, however they now seem to be vulnerable in Peninsular Malaysia; apparently mainly due to localised habitat destruction.

Dragontails are rather atypical when compared to normal Swallowtails in that they have such a small wingspan (about 50mm) and of course transparent wings - two features that are most unusual in Papilionidae butterflies. (This same family also houses the worlds largest butterfly Ornithoptera alexandrae with a massive wingspan of up to 30cm).

A specimen housed in Java seems to be the Holotype for the genus.
Posted by Jon Downes at 11:47 AM No comments:

On this day in 2003 the Trans-Neptunian Object 90337 Sedna was discovered. Senda is the subject of much debate because of several unusual attributes like it's unusual orbit shape. It is the furthest known object from the Sun that orbits it of notable size.
And now the news:


I think that posting this video relating to the “on this day” section makes me both big AND clever:
http://www.youtube.com/watch?v=Z54-QHEZN6E
Posted by Jon Downes at 11:43 AM No comments: