Bigfoot of the Rockies (Documentary)


A word about cryptolinks: we are not responsible for the content of cryptolinks, which are merely links to outside articles that we think are interesting, usually posted up without any comment whatsoever from me.
For many people it's an irresistible notion - that Tasmanian tigers still exist somewhere deep in the Tasmanian wilderness. 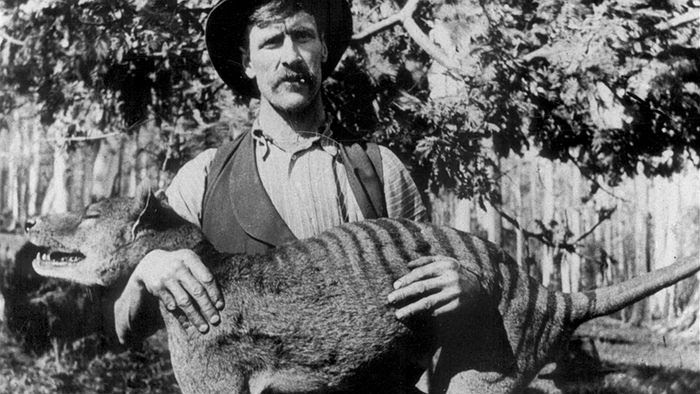 A man holding a Tasmanian tiger
Since the death in captivity of the last known thylacine in 1936, there's been endless speculation that a small population of the animals may have survived.
One of the true believers is Col Bailey.
Describing himself as a bit of an old bushie, Col has spent much of the last 45 years scouring Tasmania for signs of the thylacine.
In his new book Shadow of the Thylacine - One Man's Epic Search for the Tasmanian Tiger, he documents this search and reveals a personal encounter with what he believes was a Thylacine in 1995.
Read on...
Posted by Jon Downes at 2:22 PM 1 comment:


Should cryptozoologists be seeking the thylacine in New Guinea rather than Tasmania and mainland Australia? Karl Shuker investigates the enigmatic dobsegna of Irian Jaya.

Yesterday was a peculiar one. Back in February I had my eyes tested and was told that I had some of the symptoms of glaucoma, and that I needed to go to North Devon District Hospital for a checkup. My Grandmother had glaucoma, and went blind as a result, so I have been worried about this appointment for several months. As it turns out, I don't have the condition (yet) although there are a few mildly worrying symptoms in each eye. However, I have been assured that even if I do develop it, they will be able to nip it in the bud very quickly and effectively. After all, my grandmother went blind half a century ago, and even in the Downes family, half a century is a long time. Various things went wrong yesterday in my absence, and I would like to apologise to both Dale Drinnon and Thom the World Poet, and to assure them (and you) that normal service has resumed.

*  Jon Downes, the Editor of all these ventures (and several others) is an old hippy of 53 who - together with his orange cat (who is currently on sick leave in Staffordshire) and a not very small orange kitten (who isn't) puts it all together from a converted potato shed in a tumbledown cottage deep in rural Devon which he shares with various fish, and sometimes a small Indian frog. He is ably assisted by his lovely wife Corinna, his bulldog/boxer Prudence, his elderly mother-in-law, and a motley collection of social malcontents. Plus.. did we mention the orange cats?
Posted by Graham Inglis at 2:05 PM No comments:

On this day in 1662 the first recorded “Punch and Judy Show” took place in Britain and according to Samuel Pepys it was preformed by an Italian puppet master using a character loosely based on Pulcinella from the Commedia Dell'Arte, which soon evolved into the affable child murdering wife-beater we know today.

It was a bad day at the office for the “Most Haunted” crew:
http://www.youtube.com/watch?v=TDcOtnE04Ow
Posted by Jon Downes at 12:13 PM No comments: