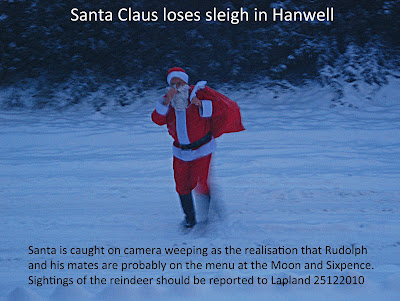 Santa spotted in Hanwell – what are the odds of that? It seems he was on his way to the other side of the world to start delivering when…

I was so lucky to get this shot. Yes, it’s sad but the snow has caught us all out and we need to eat what we can to survive. We shouldn’t blame Hylton at the Moon and Sixpence Public House. Santa is magic, though, isn’t he so he will undoubtedly find a way to deliver all the presents. The roads are not gritted, though, so it looks like a long week for the big man. Keep your ‘mince pies’ peeled folks, and remember to give thanks to the spirit of Christmas if you have venison at the Moon and Sixpence this year J

Carl
Posted by Jon Downes at 12:34 PM No comments:

In February 1938 the seaside districts of Pensacola, Florida, were held in the grip of a most peculiar case of mass hysteria. This was the reign of a six-armed, six-legged, panther-headed gorilla called the Goon of Guillemard Street. The sewer monster made most of its rumoured appearances on Guillemard and Romana Streets. People were afraid to leave their homes, partly due to fear that the monster would drop off a roof or from a tree limb and attack them. On one occasion, the police were called out to St Michael's Cemetery on Alcaniz Street to investigate a sighting of the monster.

The Goon's death, though, didn't come at the hands of the police or the armed posses, which took to the streets. It came at the hand of the root of all evil: the almighty dollar.

It seemed that the merchants and businessmen of Southeast Pensacola were distressed at the loss of cash-flow inspired by the chimera. After all, if people wouldn't take to the streets from fear of something that made the man-eating clown in It look like a rank amateur of the sewer monster circuit, they certainly weren't spending any money. So the merchants got together and created an urban legend of their own; one which said the Goon tried to attack a car bound for Mobile, Alabama, and was killed.

The story may have been false but it killed the rumours. The Goon of Guillemard Street was no more.

The legend was spawned by an incident that January in (coincidentally, or were Pensacola's merchants wise to the Goon's origins?) Mobile, Alabama. Some kind of monster had slithered out from the swamps and slaughtered someone's dog. This one was christened the Frankenstein of Fisher's Alley, and once it had a catchy name the urban legends took off - it was covered in a bullet-proof shell. Its size? Some said it was cougar-sized. Some said Great-Dane-sized. Some even said Tyrannosaurus-Rex-sized. Nobody could agree. Some of the faceless experts that plague these sorts of accounts felt it was a wild dog, a wildcat, or a bear.

Then Frankenstein was caught. The swamp monster was only an otter. A big one, to be fair, but an otter.

It was thought that the stories of the Mobile monster migrated eastward, took root in Pensacola, and in good urban legend fashion were embellished. The monster was made more spectacular, and the Goon of Guillemard Street was born.
Posted by Jon Downes at 12:33 PM No comments:

THE CFZ IN WINTER: Amphiuma Surprise 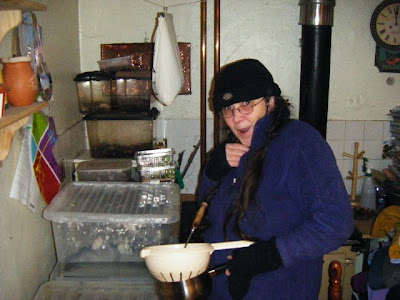 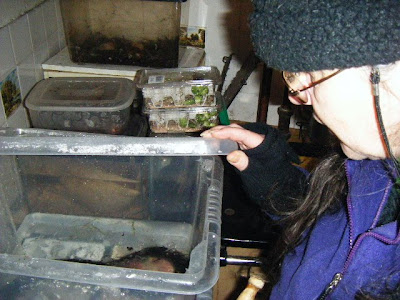 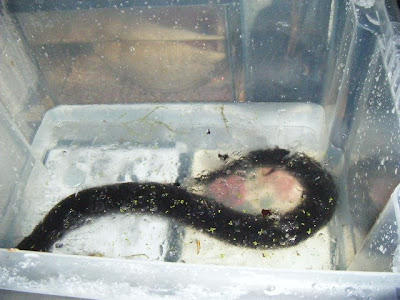 I always knew that my wife was a wonderful woman. Indeed it has never been in doubt. But due to this ridiculously cold weather, the amphiumas, who have spent the last five winters in unheated tanks in the museum have been brought into the kitchen until the end of the cold weather. Graham went up to the museum this morning and found ice on the tanks, and the water nearly freezing. Although there are accounts in the technical literature of these specialised amphiumas surviving being frozen solid, I don't want to put it to the test, and as Graham pointed out, the amphiumas may survive it, but the tanks almost certainly will not!
Richard Muirhead, on the other hand, wanted to know whether the little fellows would join us for a roast dinner on Christmas Day....
Posted by Jon Downes at 12:10 PM 1 comment: 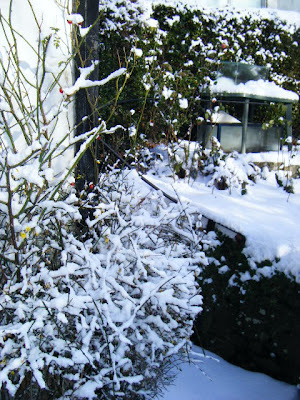 Tuesday night was the coldest night yet. I believe it was minus 15deg, and whilst I have known far more snow than this, I don't think I have ever known it to be so cold. There is one bright spark, however. As of today, the nights start to get shorter.


I have, however, made a scientific discovery: female bulldogs are the best hot water bottle ever...
Posted by Jon Downes at 11:45 AM No comments:

On this day in 1938 the first modern Coelacanth (Latimeria chalumnae) was discovered in South Africa. The Coelacanth is probably the best known example of a Lazarus taxon, other examples from cryptozoology include the ivory billed woodpecker (if indeed the 1999 and 2004 sightings were not a misidentification as some killjoys insist) and Caspian ponies.
And now, the news:

Elements of the past, elements of the future, combining to make something not as good as either; eels:
http://www.youtube.com/watch?v=0AckvdGbk4w
Posted by Jon Downes at 11:44 AM No comments: