Whilst the focus of the CFZ Mystery Cat study group is predominantly the search for proof of the British big cats, it would be unrealistic to forget that this is only part of a global mystery cat phenomenon.

Here are a selection of mystery cat stories from around the world.

Cougar hounds in demand as big cats sighted
Sooke News Mirror
Hounds are used to track and tree cougars when they threaten humans.

Big cougar prowls Victoria-area prison
MetroNews Canada
Police say they want to warn local residents that the large cat has been seen in the area. Conservation officers weren't called in because police say the cougar ...]

And one from Scotland

Wild cat sighting in New Cumnock
Cumnock Chronicle
NEW Cumnock was this week plunged into a wild cat mystery - after the alleged sighting of the unusually large black moggy in the village. , Byline: Editorial, ...
Posted by Jon Downes at 9:29 PM No comments:

We have a Zazzle shop which we use to promote our merchandise for the CFZ which raises funds and supports us in the work we do.

For those looking for unique and unusual items of cfz memorabilia please visit the link below and take a look around http://www.zazzle.co.uk/cfzjon.

So far people who have bought merchandise through the site have helped us to raise in total since its launch in January 2010 £40.97 this is good but we can do so much better!

Do not forget that many of these items will not be available at the Weird Weekend event so why not purchase them now to wear at the event itself and we will see you there!

Posted by Jon Downes at 4:11 PM No comments:

It is cold and grey but surprisingly muggy. Unfortunately the English summer seems to have come and gone, and I have a horrible suspicion that it may be like this until September. However, we do have some nice things for your amusement and edification today.

Bizarrely, just as I typed that, the sun came out. But my remark about the blog posts being particularly good today still stands:

Jefferson Starship are one of the iconic bands of the counter-culture. Yes, there still is a counter culture, just about, and we are very proud to be a tangental part of it. The forthcoming 4CD set live from the Roswell UFO Festival is provoking a lot of interest in the band, like this article explaining how the band are still true to their idealistic roots.
http://gonzo-multimedia.blogspot.com/2012/06/link-starship-enterprise-music-is-still.html

I have just finished reading Helen McCookerybook's academic tome on the role of women within Punk Rock, and I found it most edifying. There will be a most positive critique in a day or two, but in the meantime, it is obvious that she still stays true to the DIY ethic of Punk. Check these out...
http://gonzo-multimedia.blogspot.com/2012/06/look-what-helen-mccookerybook-has-for.html

This is totally peculiar. Back in the 1970s all sorts of things happened that would not be dreamed of today, like this gloriously UN-IRONIC (note the capital letters boys and girls) cover version of 'Silver Machine' by the M-O-R icons the James Last Orchestra. This is possibly the greatest thing that I have heard in my life.
http://gonzo-multimedia.blogspot.com/2012/06/easy-listening-medley-of-hawkwind-t-rex.html

For the past few months I have been working on a new book for Gonzo. I think that Peter McAdam's creations are hysterically funny. My wife thinks they are stupid. It is good to have differences of opinion in a relationship. Healthy like.
http://gonzo-multimedia.blogspot.com/2012/06/meet-9-henrys.html

There is a new Live CD/DD package from Anderson, Bruford, Wakeman and Howe out any day on Gonzo Multimedia. Coincidentally (and as we note regularly on these and our more fortean pages, there ain't no such thing as a free coincidence), ABWH stories are appearing across the net...
http://gonzo-multimedia.blogspot.com/2012/06/link-anderson-bruford-wakeman-howe.html

And here we have a particularly insightful interview with Jon Anderson, who seems to be undergoing somewhat of a re-birth at the moment. His last two solo outings were magnificent, and the new gaggle of recordings, which are just over the horizon, promise to be even better.
http://gonzo-multimedia.blogspot.com/2012/06/link-voice-of-yes.html

Someone else who is out and about at the moment is Michael Des Barres. His new album, which is due in a couple of weeks, is absolutely fantastic. Expect a song-by-song critique of it from me any day now. In the meantime, here is a touching little anecdote that goes some way to explaining why he is such a well-loved artist...
http://gonzo-multimedia.blogspot.com/2012/06/link-michael-des-barres-video-du-jour.html

I have just noticed that I posted these notifications everywhere and forgot to put the links in, so I am going back to do it all over again. I am afraid I am not firing on all four cylinders, or as a friend of mine puts it several Rizlas short of a suspiciously long cigarette today...
Posted by Jon Downes at 10:17 AM No comments:

Now here's a thing... On this day in 1491 King Henry VIII, who founded the Church of England was born and in 1703 John Wesley, founder of Methodism, was born so today is certainly a popular day to be born if you want to start your own religion Mel Brooks (of Spaceball's and Young Frankenstein fame) was born on this day in 1926 though and he has not, at the time of press, created a branch of protestantism yet so maybe you can't take that too seriously after all...

http://eclectariumshuker.blogspot.co.uk/2012/06/heavy-metal-dragons.html
Posted by Jon Downes at 9:23 AM No comments:

SHUKERNATURE: The Park of the Monsters

Several years ago, while browsing through a series of bookstalls in the indoor market of Bridgnorth, a town in Shropshire, England, I came upon a hardback travelogue book, dating from around the 1950s/early 1960s as far as I can recall, in which the writer described various sights that he had visited during his journeys around Europe (and possibly elsewhere). One chapter particularly interested me, as it described an extraordinary park located somewhere in continental Europe that was filled with huge, grotesque stone statues of monsters and other bizarre entities, but which had long since been abandoned and was now exceedingly overgrown, heightening its nightmarish aspect.
Read on...
Posted by Jon Downes at 9:20 AM No comments:

Email ThisBlogThis!Share to TwitterShare to FacebookShare to Pinterest
Labels: shukernature

I OWE RICHARD THORNS AN APOLOGY 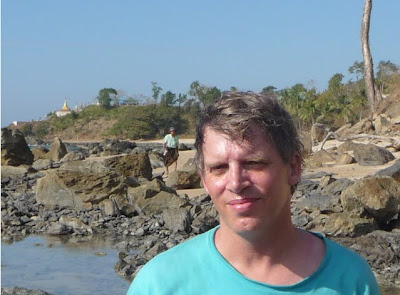 This forthcoming Weird Weekend we once again have an eminently groovy selection of speakers for your delectation. However, as regular ww-watchers will know, every year I proudly present a new discovery: someone who is not yet a regular on the Fortean conference circuit. This year that speaker is Richard Thorns, an explorer who has made it his life's work to find the fabled Pink-Headed duck which is usually thought to have been extinct for decades.

However, although I booked him months ago, I totally forgot to put him on the speakers' list on the WW website.

He has waited patiently for me to do so, to no avail, and finally (ever so gently) prodded me yesterday. It is up now. CHECK IT OUT. And, once again, please, Richard, forgive me for my tardiness.
Posted by Jon Downes at 12:23 AM 1 comment: