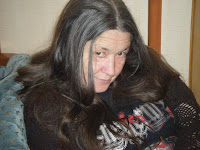 I have never been a fan of modern art; unmade beds or a half-open, half-eaten can of baked beans in the middle of an empty room, with one sticky bean 'artistically' left where it dribbled down the side of the can to stick itself on the floor, don’t really rock my boat.  However, as can be seen from the photos, it does appear that we have an exponent of such artistic ‘talent’ here. Yes right here, in a kitchen in deepest, darkest .

Read on
Posted by Jon Downes at 1:04 PM No comments:

CRYPTOLINK: I'm With Stupid: On the Trail of Colorado's Cunning Cryptids

There's a program on Animal Planet called Finding Bigfoot that really ought to be called "Looking for Bigfoot" for reasons that need no explanation. Regardless, Sasquatch has become so famous that he now has his own reality show despite the possibility that he actually may not be real.
Likewise, a million people visit Loch Ness each year to see if they can catch a glimpse of Nessie, the aquatic monster that purportedly lurks in its depths. Of course, none of them ever see anything, but it doesn't seem to matter. Real or not, Nessie is a bona fide celebrity.
Sasquatch and Nessie are the two most famous examples of what we smart people call cryptids, but there are plenty of others. The yeti, the chupacabra, the Jersey devil, Champ; the list goes on and on. And if there's a monster, you can bet there's someone hard at work looking for it and trying to score his or her own reality show.
Now, regular readers of this column know that I love imaginary creatures, and I want my own reality show as much as anybody; it would seem that hunting for monsters would be a perfect fit, right? Unfortunately, it's gotten so crowded in the field of cryptozoology that it's become exceedingly difficult for me to find a monster of my own. I refuse to share one with someone else.
Read on...
Posted by Jon Downes at 1:00 PM No comments:

The other day I posted what appeared to be an open letter from Greg Lake which appeared on a foreign blog. As I always do, I included a link to where I got it from. However, hidden in the original post there was a link where people could download illegal copies of Greg's new album. I had no idea about this, and as soon as it was brought to my attention I removed the post. But it only goes to show how careful you have to be, and I would like to apologise to everyone who I inadvertently wronged.

On another irritating note, as some of you may have noticed, visiting the homepage of this week's issue of The Gonzo Weekly flashes up an error message in Google Chrome. As far as I am aware this is completely spurious, and is a problem woth Chrome, rather than anything to do with us. The problem seems to be that one of the links in this week's issue is also linked to a video production company called www.massoutreach.com. I have never heard of them, and certainly not had any dealings with them, but it is THIS company that causes the error messages to be flashed up in Chrome. It doesn't do it in either Internet Explorer or Firefox. The Google Safe Browsing diagnostic page seems to imply that there is actually nothing wrong with massoutreach.com either.

*  Jon Downes, the Editor of all these ventures (and several others) is an old hippy of 54 who - together with his orange cat (who is currently on sick leave in Staffordshire) and two very small kittens (one of whom is also orange) puts it all together from a converted potato shed in a tumbledown cottage deep in rural Devon which he shares with various fish, and sometimes a small Indian frog. He is ably assisted by his lovely wife Corinna, his bulldog/boxer Prudence, his elderly mother-in-law, and a motley collection of social malcontents. Plus.. did we mention the orange cat?
Posted by Jon Downes at 9:19 AM No comments:

Posted by Jon Downes at 7:24 AM No comments:

On this day in 2003 Warren Zevon died. Zevon penned and preformed several songs with a Fortean flavour including Werewolves of London, Rowland the Headless Thompson Gunner (where a mercenary avenges his death from beyond the grave) and Gorilla You're a Desperado (where a gorilla forcibly swaps places with a man).
And now the news:


Gorilla You're a Desperado:
http://www.youtube.com/watch?v=epov4_3h2-w
Posted by Jon Downes at 7:19 AM No comments: