It is always nice to see video of Hong Kong animals in the spring, but at about 29 seconds in there is something that I want to identify. You may remember that in my recent article about dragonfly swarms in Hong Kong I mentioned a moth that also swarmed on several occasions at Mount Austin when I lived there between 1964-8. This is the species, and I stumbled upon it completely by accident.

Does anyone know what it is?

Also, through complete happenstance, there are clips of scolopendra as written about today by Richard Muirhead....
Posted by Jon Downes at 11:41 AM 1 comment: 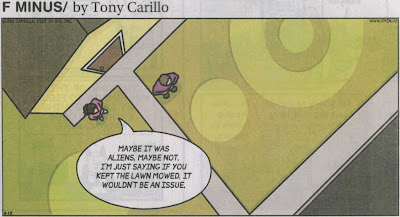 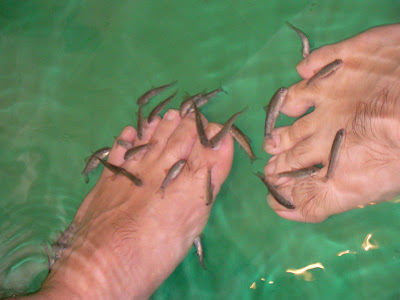 Max found this advert online and I have to admit that I initially thought that it was just him being stupid. He sent me an advert for a foot spa, and I thought it was just him exhibiting typically wacky student humour. But it wasn't.


Most Forteans will have heard of Turkish doctor fish but I did not know that they were commercially available in the UK....
Posted by Jon Downes at 11:35 AM No comments:

THE DOG WITH THE LONGEST TONGUE IN THE WORLD 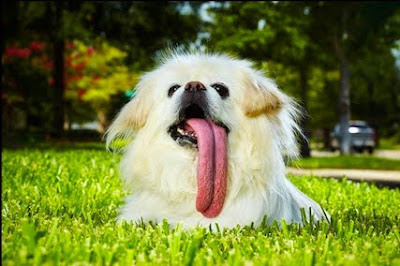 This is a news item that Biggles in particular thought was very important to put up today. It comes from the latest edition of Guinness World Records, which as far as I know still has my old mate Craig Glenday as editor, so I am sure he won't object to me borrowing it.

The new volume also includes skateboarding dogs and cat polydactyly so I can recommend it to any serious student of such stuff.

More here
Posted by Jon Downes at 11:26 AM No comments: 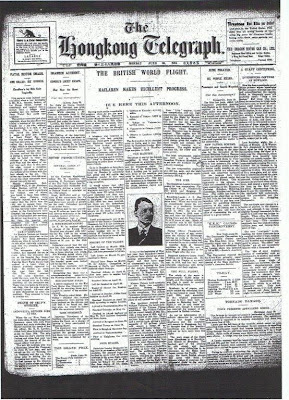 Anyone who has lived in Hong Kong, especially any entomologist or Fortean, will be well aware of the centipedes, Scolopendra spp, sometimes red in colour that live in many parts of the former British territory. They certainly live on the Peak, where Jon and I lived as youngsters.

Although it is known that these myriapods can attain a length of nearly 30cm/1ft. However. there are claims that these centipedes can grow to 60 cm long; that is 2ft! (Thank you to Heywood`s Mathematical Genius Lizzy for this conversion; it took me several years to get O Level Maths). In one of those bizarre Fortean incidents, at the end of last week I was browsing the online Hong Kong newspaper archive, which like some quasi-bibliographical giant, rarely sleeps in this house, and I accidentally typed in the words GIANT CENTIPEDE in capitals, thus, when 99% of the time I type the words in lower case, and I came up with the most interesting of the total of only 7 hits, dated June 30th 1924 front page of the Hong Kong Telegraph http://hkclweb.hkpl.gov.hk/hkclr2/internet/eng/html/frm-bas_srch.html (This is the website for the search engine not this issue of the HK Telegraph) There is a very similar story from March 19th 1948 this time from The China Mail, again which I hope you can see below, but in case you can`t, it read:

2-Foot Long Centipede A giant centipede, almost two feet long, was caught and destroyed in the 3rd floor kitchen of No 80 Fuk Wa Street Kowloon,[N.W.Kowloon-R] on Tuesday [March 16th-R] The large insect was discovered near the fireplace and killed with a piece of firewood by one of the inmates of the flat.”(1)[Inmates, that`s an interesting choice of words, what was he, a prisoner?-R} Interestingly the 1948 centipede was also found in Kowloon, that part of the mainland directly across the harbour from Hong Kong.

The 1924 item mentions a company called Messrs A. S. Watson & Co in Kowloon. This company still exists and has offices all over Hong Kong including Kowloon Tong, which is several miles east of Fuk Wa St.

There is on the web a video of a giant centipede, Scolopendra multidens/S.dehanni on Cheung Chau,:” Giant centipedes ( Scolopendra multidens/S.dehanni) are surely Hong Kong`s ultimate creepy-crawlies: not only do they look spooky and grow to 13cm long (my emphasis - R) they run fast and pack venom they inject through fangs.(2) Cheung Chau an island to the west-south-west of Hong Kong island. I also recall a Facebook contact describe a centipede on The Peak as being c.20cm in length,but 60cm? How big do centipedes grow?
The 2ft specimen from 1924 is described as S.gigas .However neither Hong Kong Insects vol 1 (1st ed. 1978) nor vol. 2 (1982) have any mention of centipedes in Hong Kong.

There is an interesting story in The Hong Kong Daily Press July 1st 1924, perhaps the editor had the story in his rival paper of the day before in mind (see above). As follows:

A correspondent of the North China Daily News writing from Mienchow ,Szechuan on June 9th says: “A few days ago a Chinese woman in the city was extremely ill. She went to a local doctor and he prescribed a centipede; charging her three dollars, and instructing her to eat it. It was a poisonous variety and the idea seems to have been that act as an anti-toxin to the poison in her system. It made her very ill. Her face and lips swelled to such an extent that she ate no food for five days.

This is only one of many examples that might be given which show that the ordinary Chinese is still living in a world that belongs to a far distant past.”(3)
[that would have been a classic quote for my China: A Yellow Peril? book!]

Richard Freeman has always been a zoo fan, and has - for the length of time that I have known him at any rate - spent a large chink of his online time browsing various zoo archive websites. London Zoo at Regent's Park was the first modern zoo to be opened, and so, I believe, it is fitting that their website and archives are one of the best. Richard, therefore, thought that you would all like to know that the Zoological Society of London print store which contains some amazing archive pictures, is back online...


www.zsl.org/printstore
Posted by Jon Downes at 10:53 AM No comments:

On this day in 1979 the Vela incident occurred. The Vela incident was when one of the U.S.A.'s Vela Hotel satellites detected a large double flash of light in the ocean between South Africa and Antarctica. The flash's origins have never been conclusively determined with theories including a nuclear test, meteorites and faulty equipment.
And now, the news:

She was first tracked down by 4chan's users, so in light of that here's a video of one of the few good viral ad campaigns, Old Spice Man, greeting the 4chan user-base:
http://www.youtube.com/watch?v=LWCVhGzrAT0
If you're unfamiliar with Old Spice Man you'll probably want to see his first video too:
http://www.youtube.com/watch?v=owGykVbfgUE&feature=channel
Posted by Jon Downes at 10:53 AM No comments: