ANDREW MAY: Jon is NOT a crank! (And that's official)

I've just done a blog post on the subject (which I've just invented) of "Theoretical Crankology". Since it mentions you by name, I thought I'd better draw it to your attention. And before you throw your hands up in horror, given the title of the piece, you're mentioned as a perfect example of someone who isn't a crank! http://forteana-blog.blogspot.co.uk/2012/09/theoretical-crankology.html

Andrew
Posted by Jon Downes at 10:42 PM No comments:

MUIRHEAD`S MYSTERIES: A MYSTERIOUS NEW STICK INSECT FROM THE PHILIPPINES

“ Recently a colleague, entomologist Oskar Conle, showed us some museum specimens of a strange-looking stick insect found several years ago on , a remote locality in the Philippine , “ explains Marco Gottardo, who is studying for a PhD at the University of Siena, Italy.

The insect was found on the third highest mountain in the archipegalo, which is considered one of the richest areas of biodiversity in the world.

“We were baffled. It looked so different from any other known stick insect in the world that we immediately realised it was something very special.” Mr Gottardo and colleague Philipp Heller carefully examined the specimen.

“We concluded that it represented an unknown genus and species of stick insect, “ Mr Gottardo told BBC Nature. The scientists have published details of the discovery in the journal Comptes Rendus Biologies. "The new stick insect is wingless, with a stout body and rather short legs,” says Mr Gottardo.

The scientists think these features are likely to be special adaptations for living in the low-growing vegetation of a montane rainforest. Most tree-dwelling stick insects that live in the forest canopy have slender and elongated bodies and legs, thought to provide good camouflage among stick and leaves. “Another unique characteristic is the spectacular colour pattern.[A male] has dark bluish-green head and legs, and a bright orange body with distinctive bluish-black triangle-shaped spots on its back,” he adds.

It is more likely that the insect uses these striking colours to warn off predators, rather than a form of camouflage. “In fact we have discovered that the new stick insect has the ability to release a potent defensive spray from glands located behind its head. The defensive substance is sprayed when the insect feels threatened, and has a strong distasteful smell, which likely functions to repel potential predators in a similar way to skunks,” says Mr Gottardo.

The scientists have named the insect Conlephasma enigma.

“We have named the new stick instect with the specific epithet “enigma” because its systematic position in the tree of life of stick and leaf insects remains a mystery,” says Mr Gottardo. Many of the stick insect`s distinctive features are unlike those recorded on other stick insects. One feature, however has been seen before. The microstructures of Conlephasma enigma`s mouthparts are strikingly similar to those held by another group of stick insects. The problem is that these stick insects live in tropical , on the other side of the world, raising the question of how two insects so far apart might share a similar trait.

The researchers hope that a more detailed molecular analysis of the stick insect`s genetics may shed light on its true identity.

“We also hope that the discovery of this particular new insect species may draw attention into the problem of rainforest conservation in the , which are home to unique and still poorly known wildlife,” Mr Gottardo says. (1) 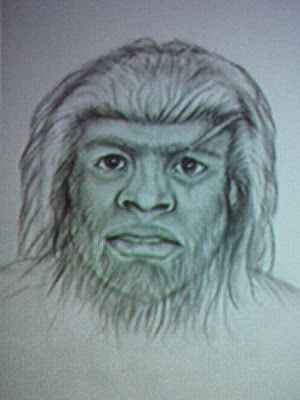 MOREHEAD — Eastern Kentucky is known for its hunting possibilities — deer, turkey, elk and even black bears. But Bigfoot? Not so much. That might be changing, however, as the second Bigfoot hunt in less than five months was scheduled for Saturday night in the Daniel Boone National Forest near Cave Run Lake.
These particular hunters were armed with nothing more lethal than infrared cameras and laser pointers. About 50 registrants paid $75 apiece to attend the event, which included afternoon lectures and presentations at the Hampton Inn in Morehead. Paranormal researcher Chad Morin said he paid $150 for a permit from the U.S. Forest Service for the night hunt, which was to last until 2 a.m. Sunday. He said the document reads "Permit to hunt Bigfoot."
Morin hosted another Bigfoot hunt April 21 near Morehead. "We saw so much weird stuff we had to make a second run," he said. Morin showed the audience an infrared-camera video taken in April that showed an indistinct "heat signature" of ... something. One of the hunters directed a laser pointer at the object, but it didn't move, Morin said. "Now, think about this," Morin told the audience. "If you're a person in the woods, and there's a huge group of people pointing laser pointers at you in the middle of the night — we're the scary ones now, you know what I'm saying? But the object doesn't move at all. It's just standing there."
Charlie Raymond, founder of the Kentucky Bigfoot Research Organization, said the group has received more than 230 reports of sightings since its founding in 1998. "We meet the witnesses in person, so we validate that they're credible as best we can," Raymond said. Anderson, Bullitt, Carter, Ohio and Henderson counties are "hot areas" for sightings, Raymond said
Read on...
Posted by Jon Downes at 9:57 PM No comments:

And so, life continues apace. Things are going really rather well at the moment, and I am having rather a nice day. The ever lovely Jess H is sat at the corner PC in my study and has just reminded me that it is my adopted nephew Max's birthday. As Max is a massive proghead (even at 22) and extols the virtues of Tarkus as a way of attracting young ladies, and has also just won a place on a PhD programme studying beetle conservation, he deserves to be here on today's blogs...

The London Acoustic Guitar Show, which features an appearance from our very own Gordon Giltrap is imminent. Read all about it my dears.
http://gonzo-multimedia.blogspot.com/2012/09/london-acoustic-guitar-show-22-23.html

As most readers of this blog will probably be aware, I am a Fortean, and I spend most of my time chasing up vague rumours, and half-understood whispers. I have been following events in the Yes camp with great interest for some years, but even I was not prepared for this...
http://gonzo-multimedia.blogspot.com/2012/09/yes-another-peculiar-rumour.html

RICK WAKEMAN: THE GREATEST CAPE
Do I look like the sort of person who steals articles from The Sunday Express? Well, not usually, but when there is an article by Rick Wakeman himself, and especially an article with a contraceptive joke in it, I really couldn't resist. Right on Rick!
http://gonzo-multimedia.blogspot.com/2012/09/rick-wakeman-possibly-greatest-pun-ever.html

Another visit to the universe of Thom the World Poet..
http://gonzo-multimedia.blogspot.com/2012/09/thom-world-poet-daily-poem_12.html

I want to introduce you to the jolly nice people at Enabler Publications who are doing a sterling job issuing books (amongst other things) on the free festival and 'traveller' culture of Britain, which has largely disappeared in the past twenty years. Alan Dearling sent me a copy of their new book, Travelling Daze which tells the story of the Free Festival and Traveller movement from then until now.
http://gonzo-multimedia.blogspot.com/2012/09/a-blast-from-my-particular-past.html

I have absolutely no idea what happened yesterday. I scheduled the daily poem from Thom, and then somehow - without realising it - managed to delete it. The first time that I realised it was just as I was going to bed, when I received an email from dear Thom, reading 'wot no poem?' So here - in addition to the normal daily poem - is an extra video for you all, to say a big sorry.
http://gonzo-multimedia.blogspot.com/2012/09/apologies-to-thom-world-poet.html

This morning, I received an MP3 of Michael's Spanish Language version of Little Latin Lover - and was overwhelmed. It has always been one of my favourite tracks from the Carnaby Street album, but hearing it in a totally different language, especially a language that I vaguely understand was an extraordinary experience, and brought a whole new dimension to the song.
http://gonzo-multimedia.blogspot.com/2012/09/michael-des-barres-la-revolucion.html
http://gonzo-multimedia.blogspot.com/2012/09/a-communique-from-michael-des-barres_3211.html

Today is Conception Day which is an officially recognised holiday over there and is exactly what it sounds like it is. Couples that conceive on this day stand a chance of winning fabulous prizes like sports cars, video cameras and state of the art dishwashers should their sprog pop out on the 12th of June. (Oh and if you think this is another one of those facts I make up and put on this page for my own amusement like Idi Amin's obsession with Captain Beaky causing him to have a 150ft tall Captain Beaky lunch box made as his answer to the Taj-Mahal, think again as this is all on Wikipedia so it must be true http://en.wikipedia.org/wiki/Day_of_Conception )

Talking of quiz show type things... I can't believe Roy Walker resisted using his catcphrase of “Say what you see.” when he was presenting this:

KARL SHUKER: THE CURIOUS CASE OF THE WEREWOLF PAW...THAT WASN'T!

Posted by Jon Downes at 9:04 AM No comments: