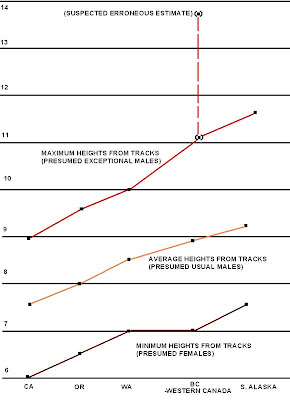 I have made a chart illustrating Gill's figures and I append it here. I had also done a rough statistical survey and arrived at results equivalent to Gill's, and with the results that I concluded were an illustration of Bergmann's Rule. Furthermore, Grover Krantz [2] spoke of the typical Sasquatch in the Washington area as typically having a male 7 feet 8 inches tall and weighing up to 800 pounds, with a female typically 6 feet 6 inches tall and weighing 500 pounds. He put a maximum size at 10 feet tall and 1000 pounds. After consulting Bob Titmus the latter said, on the basis of his experiences in Southern Alaska, he would modify those figures upward by as much as 15% for height and as much as an additional 50% in weight. Krantz added "And he may be right".
The two sets of figures also fit exactly in the same size ranges as predicted by Gill's estimates, with Titmus' Southern Alaskan estimates fitting right in at the top. The additional estimates give male heights of 9 feet and a maximum weight of 1200 pounds, and a female height of 7 feet 6 inches with a maximum of 750 pounds. Krantz's top limit of 10 feet tall plus an additional 15% comes to 11' 6 inches. The largest estimates given for Gigantopithecus are in the range of 12 feet tall and a weight of 1313 pounds for a really big male, listed independantly in the literature, which is a close match and what I would propose as the absolute maximum possible size.

Another rule frequently stated in conjunction with Bergmann's rule is Gloger's rule, which states that animals of the same species that inhabit warmer and more humid climates tend to be darker in colour (http://en.wikipedia.org/wiki/Gloger) and Gill also noted in his paper that the number of lighter-coloured Sasquatches in the reports is 13% in California and Oregon but 26% of the reports in Washington and Western Canada. That is twice as much, a noticeable increase in blonde Sasquatches as the latitudes increased.

The adherance of the reported Sasquatches to known biological rules argues for the existence of real creatures being reported rather than creatures merely made up or hallucinated. And the size estimates seem to be paralleled in Eastern Asia as well, especially in China and Manchuria; and the close correspondance of the size estimates to published estimates for Gigantopithecus is probably also no accident.

[1] "Population Clines in North American Sasquatch as Evidenced by Track Lengths and Estimated Statures" in Manlike Monsters on Trial: Early Records and Modern Evidence, Edited by Marjorie M. Halpin and Michael M. Ames, U of BC Press, 1980.
[2] Grover Krantz, Big Footprints (1992 edition) p.146
Posted by Jon Downes at 10:05 AM 6 comments:

As you may know, Naomi and I are field investigators for MUFON. I recently received a call from the chief state investigaor. He knows we are avid crypto-enthusiasts. He asked us to look into a case of an owlman-type sighting in San Antonio. It seems that it had never been fully investigated and he wants us to follow up on the case. It occurred a while back in April 2009. Here is the description provided by the witness(es):

"I was talking on my cell at the end of my sidewalk by the steet when I turned around facing my house and saw this huge black man bird thing gliding without a noise coming from the east maybe the distance would be like three streets over but about maybe five blocks down.[which three steets over there isnt five blocks because the woods are two blocks down. When i saw this I was stunned and stared at it trying to figure out what it was and then I saw it wasnt anything Ive ever seen. I ran into the house and yelled at my husband and my grown son to get out here quick. They came but seemed like forever and they looked and saw it too. When they saw it they thing was like the a few streets over and then disappeared behind the big trees. When we saw it we all said that no one would believe us; but I have recently been talking about it because it has bothered me so much. I lived in this neighborhood all my life and I can remember of three UFO sightings since I was five and all the sightings were in this neighborhood or around Stinson Field airport. I never came forward about them because people think ya lost your ever loving mind until recently when others Ive spoke with shared their experiences. I have other stories but this one is the most recent and I was wondering if anyone has ever seen this thing. It is silent like it was a glider but I could see the body was exactly like a man a very large man. Thank you for listening to me and I hope you dont think we have gone mad too. I called my daughter and told her afterwards and thats what made my mind up to stay silent. I had my darn cell on my the whole time and not once thought of taking a picture it happened so fast and Im not that savy on the cell."

Naomi puts her ha'pennorth in; I wonder whether you can guess what she is reading.
Posted by Jon Downes at 9:52 AM No comments:

THE NEW ISSUE OF PHENOMENA MAGAZINE IS OUT

Due to time and file size constraints this will be the first occasion Phenomena Magazine is not sent directly to you. Instead we will send a monthly reminder pointing you to the new edition downloadable directly from our website.


In January's edition Dave Sadler discusses a visit to the Deva Asylum. Kirst D'Raven & Steve Mera reveal their ten year investigation into the alleged paranormal disturbances in Stocksbridge UK. Jason Day looks into one of the world most talked about paranormal disturbances. Steve Wagner reviews some of the reports of unusual bedroom experiences. Marie D. Jones discusses the 2012 Enigma. The mystery of the Dropa Stones, the latest news & book reviews. And much more... Festive greetings and good will to you for the new year from all at Phenomena Magazine, MAPIT and the UPIA. Get your free PDF and all back issues from http://www.phenomenamagazine.co.uk/
Posted by Jon Downes at 9:36 AM 1 comment:

On this day in 1831 Charles Darwin boarded HMS Beagle and in 1968 Apollo 8 splashed down after its crew became the first men to break out of earth's gravitational pull, orbit the moon, see the dark side of the moon with their own eyes and re-enter Earth’s gravitational field.
And now, the news:

Apparently animal re-homing centres are having trouble getting people to take black cats. Personally, I can't understand why especially after seeing this little fellow:
http://www.youtube.com/watch?v=sFXKKZvuJQg
Posted by Jon Downes at 9:35 AM No comments: