I am rather enjoying myself this morning. Having found that even a modicum of exercise seems to have good effects on my blood sugar, I went out for a brisk (or as brisk as I can manage) amble around the village before I started work on the blogs. While I was out I watched the rooks starting work on this year's nests, and came back to listen to the new album by Richard Thompson, which is really something. What a nice way to start the working week.

*  Jon Downes, the Editor of all these ventures (and several others) is an old hippy of 53 who - together with his orange cat (who is currently on sick leave in Staffordshire) puts it all together from a converted potato shed in a tumbledown cottage deep in rural Devon which he shares with various fish. He is ably assisted by his lovely wife Corinna, his bulldog/boxer Prudence, his elderly mother-in-law, and a motley collection of social malcontents. Plus.. did we mention the orange cat?
Posted by Jon Downes at 1:10 PM No comments: 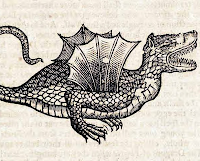 Loch Ness researcher Adrian Shine. Picture: Jane Barlow
By Peter Ross
Published on Sunday 24 February 2013 00:00
The legend of the loch may be 80 years old, but this unseen octogenarian still has a monster following, as Peter Ross discovers
‘DO NOT dally! Do not dally!” Adrian Shine – naturalist, force of nature and erstwhile monster hunter – is leading the way through the Loch Ness Exhibition Centre, which he designed, and which is home to some of the “toys” he has used in 40 years of exploring this and other lochs, including a tiny home-made submarine. He is a tall man with a hawkish profile and great white beard, striding the darkened corridors in a three-piece tweed suit and tartan tie, his mellifluous voice sounding in the murk. It is like being led around the chocolate factory by Willy Wonka, or by the Doctor showing off his Tardis.
Read on...
Posted by Jon Downes at 12:47 PM No comments:

photographed in East Peoria - Lo...
Posted by Jon Downes at 12:41 PM No comments:

Who's there?
Rhino.
Rhino who?
Rhino you are in, now open up!


And here is film of a slow loris eating a rice ball...