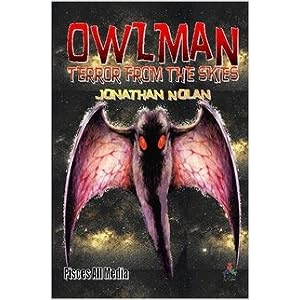 "OWLMAN! The tiny town of Mawnan is terrorized by a night flying shapeshifter - part gorgeous goddess part creature from the pit!"

It sounds brilliant! I want a copy.
Posted by Jon Downes at 6:52 PM 1 comment:

Email ThisBlogThis!Share to TwitterShare to FacebookShare to Pinterest
Labels: owlman From CFZ Australia:
Hairy-nosed wombat debuts in Victoria
Gene map may pull Devil back from brink
Papua New Guinea reveals 1000+ new species
A Tasmanian Tiger sighting (1981)
Bunyip or Yowie? The hunt is on in Richmond Vale
The Gayndah Bear returns...
On the trail of the cryptids
Posted by Andrew May at 3:18 PM No comments:

"These bizarre looking hair set is the creation of Japanese designer, Nagi Noda, which created them in her typical eccentric style. During her short life, she created ads for Nike and Coca-Cola; however, she is probably most famous for her hair hats. Everyone seemed to know who she was after she created a hair hat for Lady Gaga. I put a selection of her other hair hats below for your enjoyment.............

I only have the vaguest of ideas who Lady Gaga is, but the pictures re peculiar enough (and vaguely animal-related) to be included...
Posted by Jon Downes at 12:29 PM No comments:

At 1pm today in the UK, and other countries where we pointlessly mess with our clocks, and at noon in the rest of the world it will be exactly halfway though the year, well done folks, not much more to go now. The Christmas stuff should start showing up in shops soon, The Card Factory were the first last year with the Christmas stuff showing up in August (I kid ye not).
And now the news:

Today Dale's blog is another trawl through his mailbag, including discussions on many-finned sea serpents and giant beavers...
http://frontiersofzoology.blogspot.com/2011/06/some-more-from-mailbag-i.html
Posted by Jon Downes at 12:16 PM No comments:

RSPB: WILDLIFE FORGOTTEN IN THE NEXT EU BUDGET

WILDLIFE FORGOTTEN IN THE NEXT EU BUDGET

Martin Harper is the RSPB’s Conservation Director. Commenting on the Budget, he said: “Last-minute campaigning efforts by us and our supporters have averted the toppling of funding for the environment. However, it’s clear this budget still lacks vision and doesn’t provide the foundation necessary for improving Europe’s environment.

“It is great news that plans to radically cut the funding for landowners for environmental benefits have been pushed off the table. But the Commission’s hopes of tackling climate change, wildlife loss and environmental degradation won’t be realised with such a timid budget. This budget does not reflect a progressive Europe which cares about its environmental commitments.

“Now we need to fight even harder to ensure the best deal for Europe’s wildlife and the environment from this disappointing budget by getting it on the best track possible.”

Over 8000 RSPB supporters, including hundreds of farmers, have emailed Jose Manual Barroso (The European Commission President) directly, urging him not to axe environmental payments to landowners in this budget. This pressure proved vital in the negotiations yesterday when significant cuts were still on the table.

Martin Harper added: “We are grateful to our supporters who stepped up to the challenge by contacting Mr Barroso directly. Their support has helped retain most of the existing pot of cash for activities which can improve the environment. But we were looking for so much more. Now, we and our supporters will have to step up again for nature by lobbying governments and MEPs to honour Europe’s environmental commitments.

“These proposals will come as a great disappointment to the many farmers in the UK who are queuing up to put wildlife-friendly measures on their land through environmental stewardship schemes. The ball is now in the UK Government’s court to fight for an increase in funding for these schemes. Only then will they be able to achieve their target of halting biodiversity loss over the next decade.”

In 2010, the European Commission agreed to halt the loss of biodiversity by 2020. It has also agreed to achieve sustainable agriculture by 2020 under the Convention on Biological Diversity (CBD).

The Budget proposal does include important positive elements:

- LIFE+ has increased from €2.18bn to €3.2bn: a significant rise (although in real terms less than 30 percent), which still falls far short of what RSPB and BirdLife International had called for.
Posted by Jon Downes at 11:24 AM No comments: