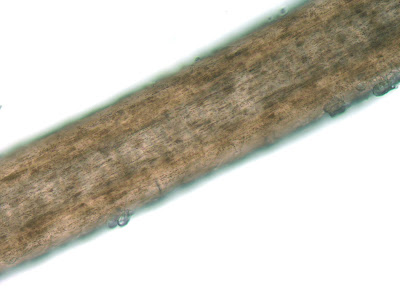 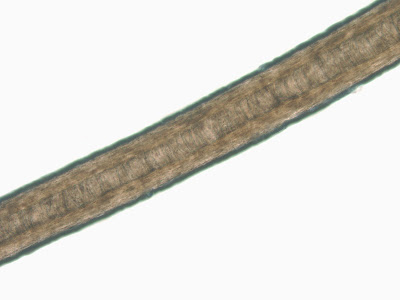 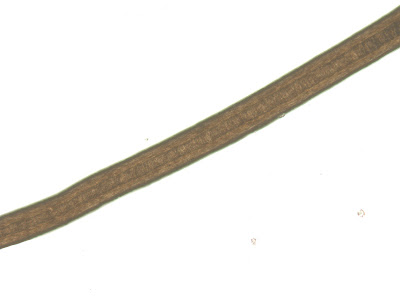 Lars Thomas has finally finished his analysis of the hair and scat samples that were found in Cumbria earlier in the year, and sent to us by Sharon Larkin. Despite being found in a field where there have been several sightings of a large cat-like animal, the hairs have proven to be from a dog, and there are enough hairs in the dried faecal samples to suggest this identity for them as well.However, please do not let this stop you sending us samples to look at. Science is about testing hypothesis, asking questions, and then formulating theories based upon the answers.
I don’t care if we have 99 more hair and faecal samples that may or may not be from a big cat to look at this year, because those 99 might be from a dog or another known animal, the 100th may not, and THAT is what science is all about.
A big thank you to Sharon, Lars, Richard Freeman, Corinna and everybody else involved in this investigation.
Posted by Jon Downes at 11:49 PM No comments:

And so we never did get to Oakham. We are probably going next week. But in the meantime all sorts of jolly things are happening. Yesterday was a particularly productive day, and for once, I managed to get everything done that I wanted to. So today's bloggofying is on time...

We start off with the mighty Marquis. Michael Des Barres was on the Andy Dick show the other day. We will be bringing you more pictures in the next few days, but here is an overview and a link to view it. I hope that we shall bring you the video footage soon..
http://gonzo-multimedia.blogspot.co.uk/2012/07/michael-des-barres-on-andy-dick-show.html

I still can't get my head around the fact that I am part of the publicity team (albeit a very minor cog) for artists such as Jefferson Starship who have been massively important to me over the years. Today another link to a story about the new 4CD live album.
http://gonzo-multimedia.blogspot.co.uk/2012/07/jefferson-starship-announce-new-tales.html

Rock and Roll is truly an international thing. It gives me great pleasure to bbring you translations of worldwide reviews of Gonzo artists, like this Portuguese review of Chris Thompson's new album. By the way, if anyone can solve the pun in my title, email me on jon@cfz.org.uk and you will win an unspecified prize.
http://gonzo-multimedia.blogspot.co.uk/2012/07/chris-thompson-rock-and-roll-as-she-is.html

Merrell Fankhauser is truly a music biz legend. I am currently reading John 'Drumbo' French's memoir of his time with Captain Beefheart, and Merrell's fingerprints are all over it. Here is another review of his recent compilation album. Again it is a privelige to be working with him!
http://gonzo-multimedia.blogspot.co.uk/2012/07/merrell-fankhauser-review.html

As regular readers will know, although most of what I write in these pages is about Gonzo Multimedia artists, their friends and relations, and other stuff like that, on occasions I digress onto a subject that I find interesting, and which I hope will interest you guys as well. Today I look at a graphic novel representation of the decline and fall of Michael Jackson.
http://gonzo-multimedia.blogspot.co.uk/2012/07/lonesome-death-of-michael-jackson.html

I have been a fan of Yes ever since someone played me 'Close to the Edge' on the school bus, something like 40 years ago. It is interesting to see how they have morphed and changed over the years, with Chris Squire as the only constant. Today he is interviewed, and we have nicked it for the Gonzo Daily.
http://gonzo-multimedia.blogspot.co.uk/2012/07/yes-another-interesting-chris-squire.html

And that, boys and girls, is about it for today. I am now awaiting the arrival of a Swedish Professor who is going to talk about dogs. Golly, I am glad that I don't have a proper job.
Posted by Jon Downes at 2:27 PM No comments:

On this day in 1527 John Dee occultist, alchemist, mathematician and England's first spymaster was born.

A channel 4 documentary about John Dee focusing on his occult exploits:

Most seem in the 5-8 metre rage. Maybe Spanish/Portuguese speaking readers could translate.
Posted by Jon Downes at 11:53 AM No comments:

Here's another CFZ bloggo exclusive for you via ShukerNature, and a Gerald Durrell theme to boot! What more could one ask for?!

We look for the witness of the Yeti de Irún to initiative of Philippe & Jean Luc Coudray. All information in :

http://criptozoologos.blogspot.com.es/2012/07/buscamos-al-testigo-del-yeti-de-irun.html
Posted by Jon Downes at 11:25 AM No comments: