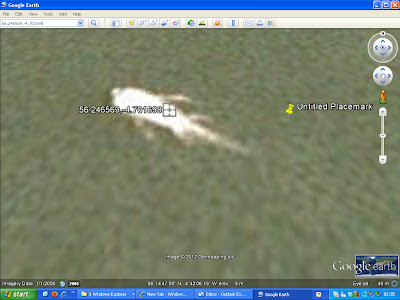 This is a bit like the Afghan mystery cat story that we posted recently. None of us had any real hope that the pictures would prove to have been of a known species, but it is the context in which they were taken (in that case, by US Special Forces night sights, and in this case on another lake which has been home to monster reports) that makes it interesting.
Posted by Jon Downes at 12:51 PM No comments:

On this day in 1959 The Big Bopper, Buddy Holly, Ritchie Valens and their pilot Roger Peterson were all killed when their small plane crashed in bad weather in a field near Clear Lake, Iowa, USA.

This was the last song Buddy Holly sang at the Clearlake concert hours before his death (not “That’ll Be The Day” as popular urban legends would have you believe):
http://www.youtube.com/watch?v=ku5UeUT7yIQ
Posted by Jon Downes at 12:48 PM No comments:

The book's coming along nicely, I'm working on the "Africa - misidentification?" chapter which is the longest. I came across this reference in Mysterious Creatures – a guide to cryptozoology vol 2 N-Z by George M. Eberhart

This says that in July 1955, – Francois Edmund Blanc was leading an expedition to South Cameroon to collect pygmy elephants for University of Copenhagen.Eberhart writes, “After three hours of tracking on marshy ground, he came across a group of elephants that did not exceed a shoulder height of six feet."

Naturally I enquired with Lars Thomas of Copenhagen University, who replied today with:

Well, wouldn't you know. Thanks to my friend Mogens Andersen, who works at the museum as a curatorial assistant, something rather interesting has turned up. In the 50's and 60's the museum had a benefactor, the owner of a Danish medical company, one Bøje Benzon, he was filthy rich, and a very eager big-game hunter. He travelled all over the world and basically shot everything he could put his gunsights on, and when he wasn't, he paid for other people to do the same, and one of these was Edmond-Blanc, who was in Cameroon in 1955, and who did in fact shoot to very small elephants, two females. Mogens have found the notes on them in the museum archives, they are in danish - I can translate them for you if you want. But what is perhaps even more interesting is the fact that the museum does in fact have the skeleton of one of the animals, and the skull of the other. And I can get you photos of those as well.

The latest is that Lars is translating the Danish language notebooks from the expedition, and getting access to the skull and skeleton in the university museum. This is unfortunately a little difficult as it's fallen victim to a beetle infestation so the mammology bit's all wrapped in plastic or stuck in freezers, but he's on the case.

Both Lars and myself are happy for this to go up on the bloggo. Will update you. Aiming for publication ready for a Weird Weekend August launch.

So the latest big cat furore in the British press has come to an end; the DNA tests commissioned on saliva from the carcass of a deer found on National Trust land in Gloucestershire have proved to be from a fox.

New on the Frontiers of Zoology:
http://frontiersofzoology.blogspot.com/2012/01/walk-like-neanderthal.html

And on Frontiers of Anthropology:
http://frontiers-of-anthropology.blogspot.com/2012/02/rondel-settlements-and-europes-oldest.html
Posted by Jon Downes at 11:39 AM No comments:

Stuff has got in the way over the last few days and I have not had a chance to write up my ongoing nature diary, so I hope that you will all forgive me that today's episode is particularly long and drawn out.

Last week we had snow for the first time in the winter. It was the first really cold day of the season, and I am afraid that the local animals and plants had - like the humans - got a little too complacent (golly I am being stupidly anthropomorphic here) and there was noticeable frost damage. Unfortunately two of my collection of succulents have been affected - I am going to wait and see what happens in the spring rather than to make hasty decisions about shoving all the plants into the conservatory now. After all as I mentioned the other day my mesembryanthemums die off every year in the frost, but come back renewed in the spring/summer. 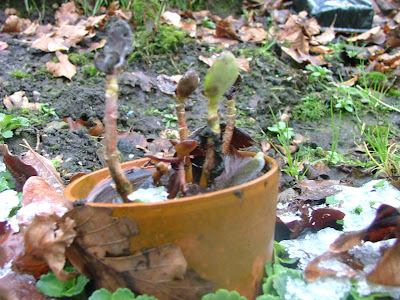 The frog spawn at Kennerland appears to have been affected by the weather, but whether the cold was severe enough to kill it only time will tell. 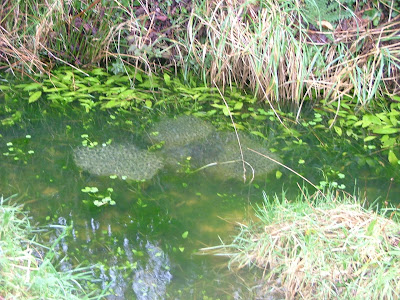 Yesterday Prudence, Corinna and I went out to Huddisford for the first time since the snow, and as you can see there was still quite a lot of snow and ice about. 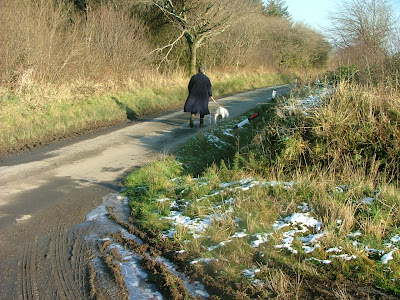 However the froggies have been active, because there is frogspawn in the ditch that we are following this year. It must be newly laid because it wasn't there last week. I have often wondered whether there is a specific reason for the early January spawn. Most years it is killed by the frost and the frogs lay again in march. I wonder whether this has an ecological purpose - as the dead spawn decays it adds nutrients to the little ecosystem of the ditch/pond. I don't know whether this is a hypothesis worth examining further or just one of my idle wonderings. 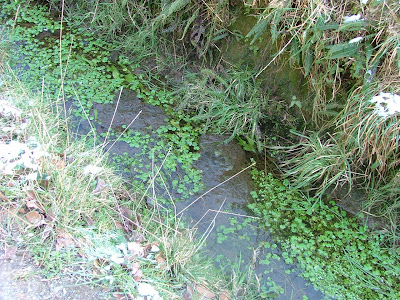 The little throughfare up the side of the bank above the Huddisford ditch is still being very regularly used. As you can see from the second photograph, there are at least three sets of different sized footprints here. 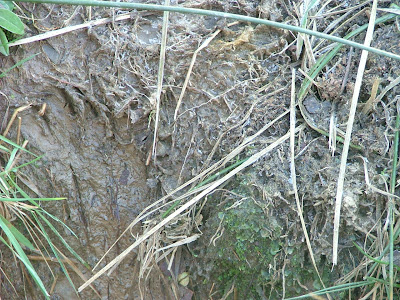 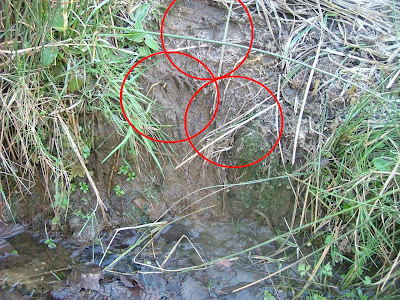 In one of the fields at the far point of our walk a little drama was taking place. Two magpies appeared to be mobbing a rook near the ground, and then - out of the middle of the mêlée hopped this little fellow. I thought at first that it was a hare, but it turned out to be a rabbit. I have no idea what actually took place in that particular episode of the zoological soap opera that is Huddisford, but Prudence was so enthralled by it all that she refused to get back in the car, and was chastised. 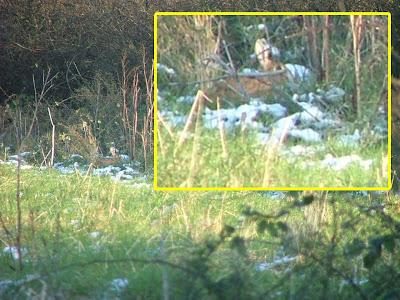