OLL LEWIS: How awesome is this?

Take a look at the BBC's new bit of camera kit! How awesome is this?

Although at the moment it'll just be used for getting pretty pictures for news reports I wouldn't be surprised if in a few years it is not a mainstay in wildlife documentaries, and as the tech becomes more affordable and quieter drone-like cameras such as this could be used for observing, tracking and finding rare and elusive wildlife and maybe even cryptids.

CRYPTOLINK: Locals in the idyllic holiday town of Magnetic Island in Townsville have been left scratching their heads after a monster-like creature was spotted in waters off Picnic Bay on Friday. 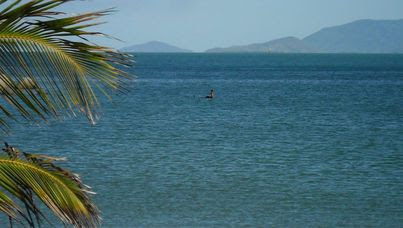 "I was walking along the beach looking for wedding locations of all things," Mr Herron told ninemsn. "Suddenly, somebody shouts out, 'what the heck is that? It looks like the Loch Ness monster!'

Mr Herron said the object, which locals have nicknamed a UMOOT (unidentified marine object or thing), appeared to be moving and was about 250 to 300m from the shore. "I thought maybe Scotland had been too cold lately so Nessie decided to come and visit Maggie [Magnetic Island]" laughs Mr Herron.

CRYPTOLINK: Giant ’sea serpent’ of an oarfish carried hundreds of thousands of eggs

LOS ANGELES — A 14-foot (4.2-meter) oarfish that washed ashore in Southern California last week was ready to become a mommy.
The serpent-like fish — one of two discovered along the coast last week — was dissected Monday and marine biologists found that the healthy female was ripe to spawn, H.J. Walker of the Scripps Institution of Oceanography said Tuesday.
The silvery fish’s 6-foot (1.8-meter)-long ovaries contained hundreds of thousands of eggs that were nearly ready to be released, Walker said.
The fish had lost its tail somehow while alive and it had disc-shaped wounds from cookiecutter sharks, but those injuries wouldn’t have been deadly, Walker said.
In fact, it’s unclear why the creature died, although Walker said it was possible the deep-water fish came too close to the surface, where it may have been knocked around by waves.
The oarfish washed up on a beach in the San Diego County coastal city of Oceanside on Friday. Several days earlier, a snorkeler found the carcass of an 18-foot (5.4-meter) oarfish off Catalina Island and dragged it to shore with some help.
The cause of death for the larger fish also remains a mystery.
Read on...
Posted by Jon Downes at 2:43 PM No comments:

Yesterday got mightily weird. As regular followers of my inky-fingered scribblings will be aware, a week or so ago I managed to knacker the office telephone. Graham tried to fix it but managed to make it worse with the effect that (although we didn't realise it at the time) we could receive incoming phone calls but wouldn't hear a ring. As both Graham (in one hire car) and Corinna and Mother (in another) were pootling around Barnstaple, returning said hire cars and doing other important stuff for which three-way communication was a must, this was mildly disconcerting. However, it all worked out in the end: they all came home, and Graham fixed the telephone system by the simple artifice of unplugging the wonky phone...whereupon the Broadband went down for the rest of the day. Strange Days, indeed (most peculiar, Mother).


Another visit to our old friend Thom the World Poet
http://gonzo-multimedia.blogspot.com/2013/10/thom-world-poet-daily-poem_29.html

Today's Track of the Day is by Genre Peak
http://gonzo-multimedia.blogspot.com/2013/10/the-gonzo-track-of-day-hell-on-surface.html

Issue 49 of Gonzo Weekly went out on Sunday (and I forgot all about posting about it)
http://gonzo-multimedia.blogspot.com/2013/10/gonzo-weekly-magazine-49-i-forgot-to.html

‘I keep going back and adding things’: Greg Lake’s book is overstuffed with memories of ELP, King Crimson
http://gonzo-multimedia.blogspot.com/2013/10/i-keep-going-back-and-adding-things.html


* The Gonzo Daily is a two-way process. If you have any news or want to write for us, please contact me at jon@eclipse.co.uk. If you are an artist and want to showcase your work or even just say hello, please write to me at gonzo@cfz.org.uk. Please copy, paste and spread the word about this magazine as widely as possible. We need people to read us in order to grow, and as soon as it is viable we shall be invading more traditional magaziney areas. Join in the fun, spread the word, and maybe if we all chant loud enough we CAN stop it raining. See you tomorrow....

* The Gonzo Daily is - as the name implies - a daily online magazine (mostly) about artists connected to the Gonzo Multimedia group of companies. But it also has other stuff as and when the editor feels like it. The same team also do a weekly newsletter called - imaginatively - The Gonzo Weekly. Find out about it at this link: www.gonzo-multimedia.blogspot.com/2012/11/all-gonzo-news-wots-fit-to-print.html

* We should probably mention here that some of our posts are links to things we have found on the internet that we think are of interest. We are not responsible for spelling or factual errors in other people's websites. Honest, guv!

* Jon Downes, the editor of all these ventures (and several others) is an old hippy of 54 who - together with his orange cat (who is currently on sick leave in Staffordshire) and two very small kittens (one of whom is also orange) - puts it all together from a converted potato shed in a tumbledown cottage deep in rural Devon, which he shares with various fish, and sometimes a small Indian frog. He is ably assisted by his lovely wife Corinna, his bulldog/boxer Prudence, his elderly mother-in-law, and a motley collection of social malcontents. Plus... did we mention the orange cat?

Karl Shuker reveals the fascinating connection between a long-vanished giant mammal and a terrifying storm beast of Sioux legend.

On this day in 1618 the adventurer, explorer, privateer, trader and financial backer of several early attempts to found a British colony in North America, Sir Walter Raleigh, was executed on trumped up charges related to an assassination attempt on King James. Raleigh, unlike his cohorts Drake and Grenville, was the victim of living long enough to see England's enemy, Spain, which had been where Raleigh had “acquired” most of his fortune from, become an ally and this had made Raleigh's current attachment to his head a political stumbling block.

So how did the colonies Raleigh funded do?

http://www.youtube.com/watch?v=4p-bWA1FOqs
Posted by Jon Downes at 2:05 AM No comments: