CRYPTOLINK: An Interesting Photograph from 1938

Back in May of this year, I came across an auction for a picture which was described as a photograph taken at Loch Ness in 1938. The seller was actually not quite sure if it was but thought it the most likely place. The item sold for £26.00 and that was the end of that. However, my curiosity was piqued and I took a closer look at the JPEG image that I grabbed from the eBay website. 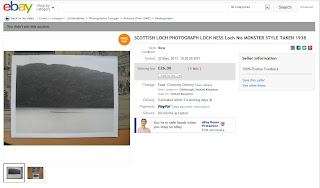 The eBay page is above but the actual image is shown below. Now this is the type of Loch Ness picture that would have been unlikely to make it into a newspaper of its time. After the excitement of the Surgeon's photograph four years previously, the bar had been set pretty high. 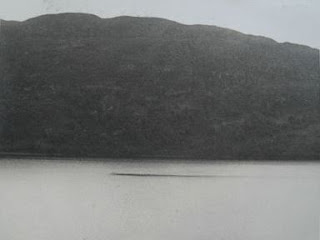 Nevertheless, was it taken at Loch Ness and what could it be? Using Google's ever useful StreetView, it came as no surprise that the picture had been taken beside Urquhart Castle at the place where the highest proportion of sightings have been recorded.

*  Jon Downes, the Editor of all these ventures (and several others) is an old hippy of 54 who - together with his orange cat (who is currently on sick leave in Staffordshire) and two very small kittens (one of whom is also orange) puts it all together from a converted potato shed in a tumbledown cottage deep in rural Devon which he shares with various fish, and sometimes a small Indian frog. He is ably assisted by his lovely wife Corinna, his bulldog/boxer Prudence, his elderly mother-in-law, and a motley collection of social malcontents. Plus.. did we mention the orange cat?
Posted by Jon Downes at 11:45 AM No comments:

1. The Cryptid Creatures of Florida by Scott Marlowe (2)
2. Monsters of Texas by Ken Gerhard and Nick Redfern (-)
3. The Great Yokai Encyclopaedia by Richard Freeman (1)

4. When Bigfoot Attacks by Michael Newton (5)


7. The Journal of Cryptozoology Volume One edited by Karl Shuker (5)
8=. Tetrapod Zoology Book One by Darren Naish (-)

Last month's positions in this pinky colour, which I think is called cerise. Sales are up as we approach the end of the year...
Posted by Jon Downes at 11:11 AM 1 comment:

On this day in 1926 television was successfully tested by John Logie Baird.
And now the news:


Ever wonder if you can watch a 3D film on a cathode ray tv? Who hasn't? Here's how:
http://www.youtube.com/watch?v=mOFy54SBPK0
Posted by Jon Downes at 9:44 AM No comments: