http://karlshuker.blogspot.com/2011/02/beebes-bathysphere-fish-untouchable.html
Posted by Jon Downes at 12:37 PM No comments:

I went to college with Sally and Nancy Moccia and while I've spent
the last 20 years sitting in a tinfoil-lined room deciphering the
hidden meanings of Sunday crossword puzzles, they've been painting
exquisite murals. 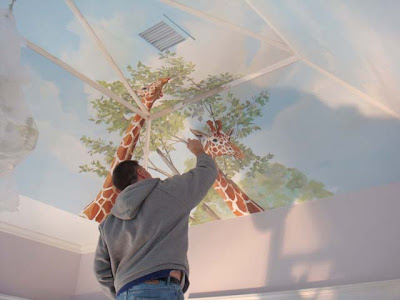 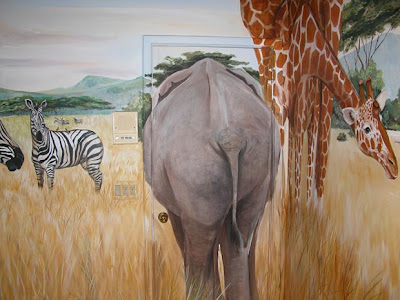 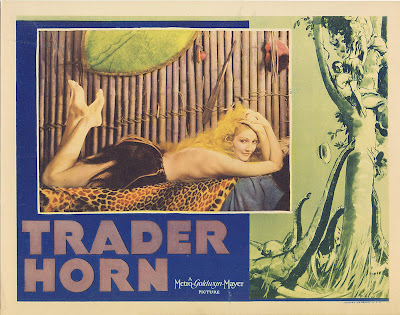 Following on from Richard Freeman's massively entertaining account, which we posted yesterday, of the 1931 Trader Horn movie comes this: a publicity poster for the film, which by 1931 standards - would, I have thought, have been unacceptably risque.

However, whilst on the subject of Trader Horn, can anyone find a photograph of the man himself? The real one; not his fictional counterpart....
Posted by Jon Downes at 12:01 PM No comments:

When I first heard about the Cheadle shark I wasn’t thinking of a fish; more likely a loan shark.

It is hardly surprising then that from the start the tale of the Cheadle shark set alarm bells ringing: while the initial report sounded quite promising there were a number of important questions that needed to be answered. The first one: was the shark alive when found?

If the shark was alive when caught it would certainly be an indication that it could have, in theory at least, come up river under its own steam. However, if the shark was as dead as the Norwegian blue parrot when it was discovered it could have come from anywhere. Certainly it wasn’t looking promising as the report suggested that the two boys who caught it were unsure if the shark was alive before clubbing it. This, added to the suggestion that they caught the fish by hand, had raised suspicion: had two lads really manage to tickle a 3ft shark as if it was a sleeping goldfish?

But that would be only half of the picture; the next area to look at is the location. The fish was discovered in the Micker Brook, which is easy enough to find, and it looks far from the most likely shark location. In fact, the only thing going for it was that there was water there. If we look at the theory that the shark swam its way up river to its final resting place, we have to consider the route from the sea, and considering the Micker Brook is 35 miles from the sea it was going to be some journey.

The route to the Micker Brook from the sea is up the River Mersey. The Mersey does reach the sea at Liverpool but before it arrives there as it nears Manchester it finds itself as part of the Manchester Ship Canal. During the mid 1980s this was a very polluted stretch of water and the prospect of anything swimming in it is a questionable idea. Actually at the time the thought of anything being capable of breaking the skin on the surface of the water was hard enough to believe.

Popular tales from where I grew up suggested that falling into the oily waters of the canal would result in death by dissolving. Despite the unsavoury reputation of this waterway, had our plucky shark made it up the canal to where the River Mersey joins it, our adventurous friend would then have faced yet another challenge: the mighty Flixton Falls. Fair enough, these are hardly comparable to the Angel or Niagara Falls; rather more an evil-looking weir, if we are being honest.

The height of the Mersey drops considerably at this point and the resulting falls are impressive if only for all the wrong reasons; the mucky pollution-tainted waters would spew between broken pallets and shopping trolleys forming a hazy rainbow in the sunlight, thanks to the many chemicals in the water. Imagining the Cheadle shark leaping salmon-like from the dark water and weaving between the falling detritus was an appealing, if far-fetched, idea.

It was looking more and more unlikely and then Richard Muirhead found the damning evidence we long suspected existed. Hiding in an old copy of the Stockport Express was part two of the story.

‘Jaws, a 3ft spur-dog shark was found 35 miles from the sea in the gentle waters of the Micker Brook, Cheadle.

It had been put there by two young jokers doing a good turn for housewife Gladys Humphries, of Parsonageway, Cheadle.

“it end up with me after a friend of my husband gave it to us for our cat, I asked two boys to get rid of it by burying it but they put it in the stream” she laughed.’

So there it was: Jaws (don’t you just love the names papers give to cryptids) the Cheadle shark was, it turns out, nothing more than rejected cat food. The article went on to say that it had been caught off the coast in Rhyl in North Wales.

And so ends the sorry tale of the Cheadle shark. But it isn’t the only mystery shark to be reported in recent years. What do you make of the story that in June 2000 a live shark was found flapping on the pavement at the junction of Argyle and Carunna streets in Glasgow?Worried residents called the police but the shark was dead by the time they arrived. If anyone knows anything else about this fish I am sure we would like to hear about it on the blog.
Posted by Jon Downes at 11:58 AM No comments:


Richard Freeman sent this excessively nasty piece along....
Posted by Jon Downes at 11:56 AM No comments:

I have just received the following petition information via one of the Pagan groups that I am associated with and feel that some of the CFZ members may be interested in supporting it. It seems that some people want a cull of corvids, as a way of protecting song birds. This despite the fact that there appears to be no evidence to support the claim by the group, Songbird Survival that Corvids are responsible for the decline in British song birds.

On this day in 1809 Charles Darwin was born.
And now the news: