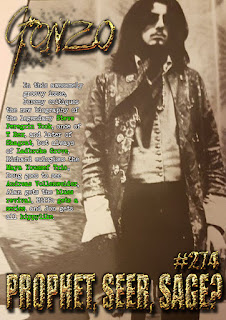 
SPECIAL NOTICE: If you, too, want to unleash the power of your inner rock journalist, and want to join a rapidly growing band of likewise minded weirdos please email me at jon@eclipse.co.uk The more the merrier really.
Posted by Jon Downes at 1:38 PM No comments:

Earth Mystery News
We've all heard the stories of Bigfoot: people saying they've seen the legendary beast all over the country, and now, another sighting in the Golden State. According to paranormal expert Jeffrey Gonzalez, the most recent sighting was near Avocado Lake. Gonzalez says a local farmer saw a family of five ...

Bigfoot Appears to Teen
Bigfoot Evidence
Three teenage kids have an encounter with a peaceful bigfoot creature near Columbia, Missouri. Featured Reports. Possible howl heard by three family members while on vacation at June Lake · Motorist has a nighttime sighting on I-95 near Rowland · Bird hunter surprises a resting sasquatch near ...
Posted by Jon Downes at 11:55 AM No comments:

THE GONZO BLOG DOO-DAH MAN HAS A TOUCH OF RHINOVIRUS

ON THIS DAY IN - 1918 - Lithuania proclaimed its independence.
And now some more recent news from the CFZ Newsdesk