A few days back we posted a video which - it has been claimed - shows a bigfoot, filmed in Idaho. Now a person claiming to be responsible for filming the clip has come forward..

http://bigfootevidence.blogspot.co.uk/2012/03/person-who-filmed-bigfoot-sighting-in.html
Posted by Jon Downes at 5:29 PM No comments:

1. This Notification is being distributed at the request of the United States of America.

3. These four large non-native snakes are listed as "injurious wildlife" (effective 23 March 2012) under newly revised federal regulations (50 CFR 16) that implement injurious-wildlife provisions of the Lacey Act. In addition to domestic prohibitions, the new listing makes it illegal to import live specimens (including gametes, viable eggs and hybrids) of these snakes into the United States without an injurious-wildlife permit. The import prohibition includes a ban on shipments containing these snakes transiting through the United States on their way to other countries.

4. The listing does not prohibit the import into the United States of dead specimens of these snakes or of products made from dead specimens.

The following article appeared in the Rand Daily Mail, Johannesburg on July 26th 1910. It probably refers to the Oar Fish, but I`m not absolutely certain.

A STRANGE FISH
A strange fish was washed up on the beach in Struis Bay during the week says the Cape Times. It measured 10 feet 4 inches From nose to tip of tail, and 12 inches broad. It somewhat resembled the sole, being perfectly flat, and tapered off to three inches at the tail. It had a dorsal fin running from back of the head right to tip of tail and two small fins behind the gills. It also had four streamers on the top, and three or four under the head. These varied from 3 ft four inches to 3 ½ feet and were composed of five/fine (?) thin bones running parallel , and held together and covered by a thin red skin, which looked exactly like a piece of thin red ribbon rooted to the head. It had no scales, and was covered by dark brown spots, the size of a sixpence. The oldest fishermen hear has never seen such a peculiar specimen. It would be interesting to have enlightenment, writes a correspondent. (1) 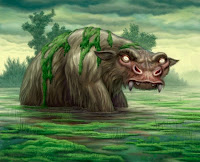 On this day in 1888 Emma Smith was murdered in Whitechapel, London. Some Ripperolgists consider her to have been an early victim of Jack the Ripper but this is thought by most Ripperologists to be unlikely due to the marked difference in modus operandi.

Speaking of Whitechapel, I recommend you seek out the 3rd series when it is released on DVD if you like creepy and atmospheric mystery drama:

Catching up time
New at Frontiers of Zoology:
Dale's Turn at The Plesiosaur Vs Longnecked Seal Theory:
http://benny-drinnon.blogspot.com/2012/04/film-fun-annual-1938-british.html

New at Frontiers of Anthropology:
Kakha Margiani guest blog on Maps of The Ancient Sea Kings and Atlantis, Part 2
http://frontiers-of-anthropology.blogspot.com/2012/03/kakha-margiani-guest-blogger-part-2.html

CRYPTOZOOLOGY ONLINE: On The Track (Of Unknown Animals) Episode 56

The latest episode of our monthly webTV show from the CFZ and CFZtv, bringing you news on our activities within cryptozoology and natural history as well as the latest cryptozoological, and monster-hunting news from around the world.