WUWM
Is the Loch Ness monster missing? There have been no reported sightings of Nessie for eight months. Gary Campbell, who runs the official Loch Ness ... 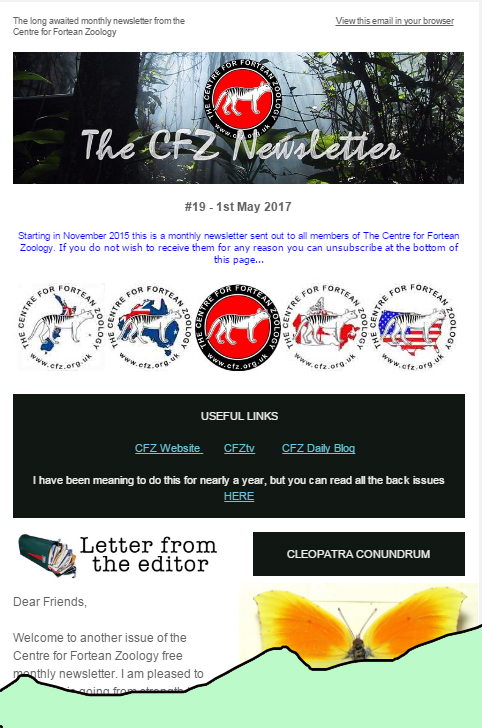 For those of you not in the know, at the beginning of each month we send out a newsletter to all members of the CFZ. The most recent (which went out a few minutes ago) included articles on a mystery British butterfly, an apology to Loes, a new book on vampires, a mystery carcass from Hong Kong, CFZ in the news, the return of OTT, Expedition Profiles for 2017, Notes and Queries etc.

THE GONZO BLOG DOO-DAH MAN IS NOT REALLY SURE WHAT IS HAPPENING. BUT THEN AGAIN, WHEN IS HE?

Bigfoot Evidence - blogger
A man leaving for work encounters a bigfoot just outside his house. Terrified, he goes back inside, and stands guard with his gun.

Covered Truths
Eerie Wailing Of Ohio Bigfoot Captured (Video) .... Look at 2:20, there is a monkey looking Bigfoot next to skinny tree on left side of page. Shon Seibert ...

Squatchable
From Macon County, Georgia: We were cooking a hog mid day on a smoker and across the road in a big field about 300 yards away, there was a huge ...

ON THIS DAY IN - 1707 - England, Wales and Scotland were united to form Great Britain.
And now some more recent news from the CFZ Newsdesk