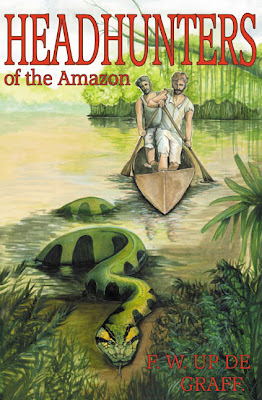 CFZ Classics is a new venture for us. There are many seminal works that are either unavailable today, or not available with the production values which we would like to see. So, following the old adage that if you want to get something done do it yourself, this is exactly what we have done.

Desiderius Erasmus Roterodamus (b. October 18th 1466, d. July 2nd 1536) said: “When I have a little money, I buy books; and if I have any left, I buy food and clothes,” and we are much the same. Only, we are in the lucky position of being able to share our books with the wider world. CFZ Classics is a conduit through which we cannot just re-issue titles which we feel still have much to offer the cryptozoological and Fortean research communities of the 21st Century, but we are adding footnotes, supplementary essays, and other material where we deem it appropriate.

Starting with Fritz W. Up De Graaf’s Headhunters of the Amazon (1921) which tells an extraordinary story that simply would not get published today even if any contemporary explorer or adventurer had the opportunity or the cojones to do what Up De Graaf and his companions did so blithely a century ago. However, this is not just a schoolboy tale of derring-do, but contains much fascinating socio-cultural information about the eponymous head-hunters of the title and some fascinating cryptozoological snippets. Could there indeed be a hitherto undiscovered species of giant stork luring in the Amazon jungle? Could it be the same as a prehistoric creature whose remains have been discovered in the same area? And could sightings of such a rara avis explain modern day accounts of pterosaurs reported across central and South America with monotonous regularity?

This book sets out the stall for CFZ Classics. It is lavishly illustrated, not only with the original pictures from the original volume but with contemporary engravings and photographs which - we feel – do much to enhance the zeitgeist of the book and the reading experience. Here we would like to thank the massively talented Gareth Shaw who worked so hard on the cover illustration, and who – like us – is a devotee of a style of art, which like so many of the explorers whose thrilling exploits its illustrated, doesn’t seem to be around in the rarefied and ever so slightly decadent days. And there’s more. One of the most important aspects of this entire project is that, because all the books which are being produced by CFZ Classics are out of copyright and in the public domain, the author royalties from it will be paid to the person who did all the work preparing this new edition. This provides a unique, and we hope entertaining, way for impecunious cryptozoological researchers around the world to fund their activities.

I hope you agree with us that CFZ Classics is an eminently worthy new project for us.
Posted by Jon Downes at 10:13 PM No comments:

In Peter Rogerson's recent review of a cryptozoology title he noted that the Icelandic postal authorities had recently issued a set of stamps depicting some of the weird and wonderful creatures that haunt the seas around their island. Now their Nordic neighbours in the Faroe Islands, a self-governerning Danish dependency in the Atlantic about 300 kilometers north-west of Scotland, have issued stamps depicting some of the creatures that haunt the islanders' dreams and legends.

A yellow submarine is on a mission beneath the surface of Lough Erne in County Fermanagh in search of an alien species.Zebra mussels are a foreign invasive species which can have a devastating impact on the marine environment, but finding out exactly what is happening in the murky depths of the lake is a challenge.A high-tech submarine is monitoring the bottom of Lough Erne to study the zebra mussel population in different areas and its distribution at various depths.The autonomous underwater vehicle (AUV) is being developed by Leo Steenson, 26, from Glenarm, County Antrim, who is a PhD student at the University of Southampton.
"This is a two-metre long submarine but it's not remote controlled and there are definitely no people inside it," said Mr Steenson. "It's got a computer inside and a lot of different sensors and what we do is we write some software to let it guide itself.

New at Frontiers of Anthropology, Guest Blogger Kakha Margiani continues about Giants:http://frontiers-of-anthropology.blogspot.com/2012/05/bones-of-our-atlantean-ancestors.html
Posted by Jon Downes at 9:49 AM No comments:

On this day in 1279 BC Ramesses II (aka: The Great, aaka: Ozymandias) became Pharaoh of Egypt. As well as being regarded as one of Egypt's greatest Pharaohs he is also thought, by some, to have been the Pharaoh depicted in Exodus. Ramesses II is also the only ancient Egyptian person to have been issued with a valid French passport.

Vincent Price reads Ozymandias:
http://www.youtube.com/watch?v=zsP3xfQELFY
Posted by Jon Downes at 9:28 AM No comments:

...and the Gonzo Daily, rises to greet another day.

We have another bunch of eminently groovy things for you starting with (at bloody last) Graham's account of the opening night of the current Hawkwind UK Tour:
http://gonzo-multimedia.blogspot.com/2012/05/hawkwind-2012-bridport.html

We have a link to an interesting and insightful interview with Mimi Page:
http://gonzo-multimedia.blogspot.com/2012/05/link-coolgrrrls-interview-with-mimi.html

We have a song by song dissection of the Wally reunion album, Montpelier:
http://gonzo-multimedia.blogspot.com/2012/05/link-new-wally-album-dissected.html

Gong are on the road again this autumn:
http://gonzo-multimedia.blogspot.com/2012/05/warning-pothead-pixies-on-tour.html

There is a link to a fabbo Troy Donockley review:
http://gonzo-multimedia.blogspot.com/2012/05/link-great-troy-donockley-review.html

That's it for today. We reconvene tomorrow...
Posted by Jon Downes at 9:28 AM No comments: