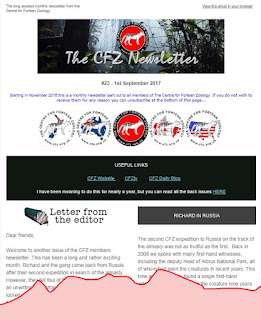 For those of you not in the know, at the beginning of each month we send out a newsletter to all members of the CFZ. The most recent (which went out this morning) included articles on the expedition to Russia, Paul Vella, a chupacabra skull that isn't, a picture query from Col Blashford-Snell's Mokele Mbembe expedition, o.o.p Nile Monitor, a mysterious animal that might be a 19th Century blue dog, a mystery cat from Nepal, a new book on vampires, CFZ not in the news, the return of OTT, Expedition Profiles for 2017, Notes and Queries etc.

If you want to view a sample issue click here: http://tinyurl.com/pw7rw9l
Posted by Jon Downes at 12:01 PM No comments:

The Seattle Times
JEMEZ SPRINGS, N.M. (AP) — A New Mexico village is holding a festival in connection with a legend that Bigfoot is roaming around the state's Jemez ...

A Bigfoot sighting on South Bass Island
Weekly Record Herald
By the time you are reading this, college football season has already started. Not that the weather necessarily changes, but football is the start of our ...

You Can't Kill Bigfoot in Washington and More Odd Animal Laws
National Geographic
The United States has some pretty peculiar regulations when it comes to wildlife—real or imagined. View Images. Mexican free-tailed bats sail through ...

Celebration of all things Bigfoot in Willow Creek on Saturday
Eureka Times Standard
Bigfoot waves from a bizarre Willow Creek Fire Safe Council float during the annual Bigfoot Days Parade in 2016 in the riverside town. This year's ...
Posted by Jon Downes at 4:30 AM No comments:

THE LAST TRAIN TO THE GONZO BLOG DOO-DAH MAN

ON THIS DAY IN - 1939 - World War II began when Germany invaded Poland.
And now some more recent news from the CFZ Newsdesk