THE GONZO BLOG DOO-DAH MAN HAS LITTLE TO SAY


* Jon Downes, the Editor of all these ventures (and several others) is an old hippy of 56 who - together with an infantile orange cat named after a song by Frank Zappa, and a small kitten totally coincidentally named after one of the Manson Family, purely because she squeaks, puts it all together from a converted potato shed in a tumbledown cottage deep in rural Devon which he shares with various fish, and sometimes a young lady called Jessica. He is ably assisted by his lovely wife Corinna, his bulldog/boxer Prudence, his elderly mother-in-law, and a motley collection of social malcontents. Plus.. did we mention the infantile orange cat, and the adventurous kitten?
Posted by Jon Downes at 6:42 PM No comments: 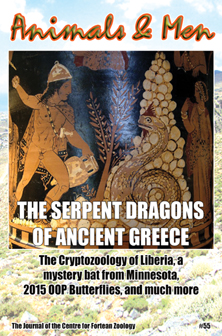 Posted by Andrew May at 2:40 PM No comments:


The Magonia Review of Books has posted an excellent review of our reissue of George M. Eberhart’s two-volume Mysterious Creatures: A Guide to Cryptozoology...

ON THIS DAY IN 1065 - Westminster Abbey was consecrated under Edward the Confessor.
And now some more recent news from the CFZ Newsdesk