Researcher Claims Undeniable Evidence Of Bigfoot
Bigfoot Evidence
The Crypto Reality team continues to make strong claims about their videos. Are these the images of bigfoot, or just tricks of shadow and light? You be ...

Expedition near Paul Freeman Bigfoot video location Blue Mountains
Squatchable
We travel to the Blue Mountains to find the area Paul Freeman's camping buddy claims is the location Paul filmed the famous bigfoot footage.
Posted by Jon Downes at 11:55 AM No comments: 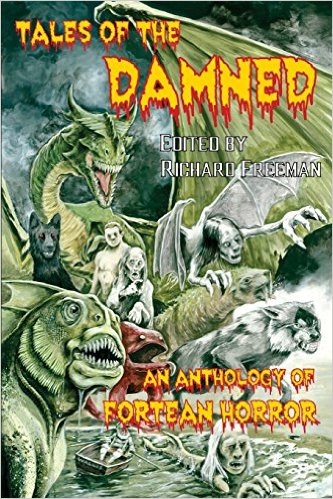 The Gonzo Daily – Tuesday
http://www.gonzomultimedia.co.uk/about.html
Yesterday was another Curate’s Egg of a day. Chloe was here in the afternoon, and worked magnificently hard, and achieved a lot. I think that she is shaping up to be an excellent assistant. We finally finished work on Karl Shuker’s new book about Loch Ness, and did all sorts of other stuff as well, including the Weird Weekend press release. However BTInternet.com is currently ‘non functione’ as our crew in Puerto Rico all those years ago used to describe most of our electrical equipment, and so - although I can send and receive emails - I can only do it online rather than through Live Mail, which is somewhat of a pain in the nether regions. But all in all it was an impressive and productive day.
I hope that I am wrong, but it is looking as if a mixture of apathy, happenstance, and the fact that nobody has any money due to the Government's austerity measures, will probably call time on the Weird Weekend after this year. I always said that I would do ten and this one will be the seventeenth, but I will still be disappointed of it has to end. Ticket sales are the slowest ever. I strongly suspect that it is because of the financial insecurity that so many people are feeling at the moment, but I hope that it will turn itself around in the next few weeks. This year's Weird Weekend featuring our very own Steve Ignorant, sponsored by our very own Erik Norlander, compèred by me and the return of  Nuneaton's Mr Entertainment, Barry Tadcaster with his pal Orang Pendek, and featuring a whole cornucopia of high strangeness and cerebral silliness. It would make me very happy if I could sell some more tickets..
find out all about the Weird Weekend
http://www.weirdweekend.org
buy tickets to the Weird Weekend:
http://tinyurl.com/jnke
And now for the news................
THE GONZO TRACK OF THE DAY: The Sirens - David Bed...
http://gonzo-multimedia.blogspot.co.uk/2016/07/the-gonzo-track-of-day-sirens-david.html
Mad Daevid Allen Interview 1975
http://gonzo-multimedia.blogspot.co.uk/2016/07/mad-daevid-allen-interview-1975.html
Backstage Wudzdog 1 - Arthur Brown
http://gonzo-multimedia.blogspot.co.uk/2016/07/backstage-wudzdog-1-arthur-brown.html
Frank Zappa - Baltimore Interview, August 1985
http://gonzo-multimedia.blogspot.co.uk/2016/07/frank-zappa-baltimore-interview-august.html
THOM THE WORLD POET: The Daily Poem
http://gonzo-multimedia.blogspot.co.uk/2016/07/thom-world-poet-daily-poem_26.html
Gonzo Magazine #192
http://www.gonzoweekly.com/
What happens when the keyboard player from Yes shares a stage with the guitarist from Queen?  Doug tells you all about it. Meanwhile, Alan is at the Edinburgh Blues and Jazz festival, our old mate Andy Roberts takes some acid (and Jon writes about it as well as asking whether the world of Narnia is sexist?) What other magazine gives you all this for free?
And there are radio shows from Strange Fruit, Mack Maloney, Canterbury Sans Frontières, and Friday Night Progressive. We also have columns from all sorts of folk including Roy Weard, Mr Biffo, Neil Nixon and the irrepressible Corinna. There is also a thrilling and slightly disturbing episode of Xtul. There is also a collection of more news, reviews, views, interviews and pademelons outside zoos(OK, nothing to do with small marsupials who have escaped from captivity, but I got carried away with things that rhymed with OOOOS) than you can shake a stick at. And the best part is IT's ABSOLUTELY FREE!!!
This issue features:
Steve Hillage, Keith Richards, The Beatles, Alan White, Bono, Ozzy and Sharon Osbourne, Elton John, Queen, Boruch Alan Bermowitz (Alan Vega), Erik Petersen, Les Stocker, Bonnie Jean Brown, Rick Wakeman, Arthur Brown, The Golliwogs, James Young, Cymbalic Encounters, Richard Brautigan, Brian May, English Rock Ensemble, Alan Dearling, Ten String Symphony, Hillfolk Noir, Mr Sipp, Rad Trads, Jan Garbarek Group, Mr Biffo, Roy Weard, Hawkwind, Xtul, Andy Roberts, Roy Wood, The Eagles, Crosby, Still & Nash, The Monkees, Neil Nixon, The Cardboard Lung
Read the previous few issues of Gonzo Weekly:
Issue 191 (Karnataka)
http://www.flipsnack.com/9FE5CEE9E8C/gonzo191.html
Issue 190 (Erik Norlander)
http://www.flipsnack.com/9FE5CEE9E8C/gonzo190.html
Issue 189 (Rick Wakeman at the O2)
http://www.flipsnack.com/9FE5CEE9E8C/gonzo189.html
Issue 187/8 (Yer holiday special)
http://www.flipsnack.com/9FE5CEE9E8C/gonzo187-8-the-summer-holiday-special.html
Issue 186 (Beatles)
http://www.flipsnack.com/9FE5CEE9E8C/gonzo186.html
Issue 185 (Judge Smith)
http://www.flipsnack.com/9FE5CEE9E8C/gonzo185.html
Issue 184 (Mick Abrahams)
http://www.flipsnack.com/9FE5CEE9E8C/gonzo184.html
All issues from #70 can be downloaded at www.gonzoweekly.com if you prefer. If you have problems downloading, just email me and I will add you to the Gonzo Weekly dropbox. The first 69 issues are archived there as well. Information is power chaps, we have to share it!
You can download the magazine in pdf form HERE:
http://www.gonzoweekly.com/pdf/
SPECIAL NOTICE: If you, too, want to unleash the power of your inner rock journalist, and want to join a rapidly growing band of likewise minded weirdos please email me at jon@eclipse.co.uk The more the merrier really.
* The Gonzo Daily is a two way process. If you have any news or want to write for us, please contact me at jon@eclipse.co.uk. If you are an artist and want to showcase your work, or even just say hello please write to me at gonzo@cfz.org.uk. Please copy, paste and spread the word about this magazine as widely as possible. We need people to read us in order to grow, and as soon as it is viable we shall be invading more traditional magaziney areas. Join in the fun, spread the word, and maybe if we all chant loud enough we CAN stop it raining. See you tomorrow...
* The Gonzo Daily is - as the name implies - a daily online magazine (mostly) about artists connected to the Gonzo Multimedia group of companies. But it also has other stuff as and when the editor feels like it. The same team also do a weekly newsletter called - imaginatively - The Gonzo Weekly. Find out about it at this link: www.gonzo-multimedia.blogspot.co.uk
* We should probably mention here, that some of our posts are links to things we have found on the internet that we think are of interest. We are not responsible for spelling or factual errors in other people's websites. Honest guv!


* Jon Downes, the Editor of all these ventures (and several others) is an old hippy of 56 who - together with an infantile orange cat named after a song by Frank Zappa, and two small kittens, one totally coincidentally named after one of the Manson Family, purely because she squeaks, puts it all together from a converted potato shed in a tumbledown cottage deep in rural Devon which he shares with various fish. He is ably assisted by his lovely wife Corinna, his bulldog/boxer Prudence, his elderly mother-in-law, and a motley collection of social malcontents. Plus.. did we mention the infantile orange cat, and the adventurous kittens?
Posted by Jon Downes at 1:30 AM No comments:

ON THIS DAY IN - 1945 - Winston Churchill resigned as Britain's prime minister.
And now some more recent news from the CFZ Newsdesk