VOLUME ONE OF THE JOURNAL OF CRYPTOZOOLOGY WILL SOON BE AVAILABLE 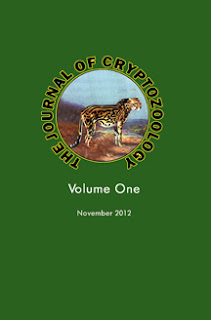 The CFZ Publishing Group is delighted to announce that Volume One of The Journal of Cryptozoology is now available for pre-order. It is being uploaded today and - unless something goes horribly wrong, the first copies will be shipped out next week.

Buy Volume One now with Paypal

KARL SHUKER: THE JOURNAL OF CRYPTOZOOLOGY IS NOW IN PRINT! 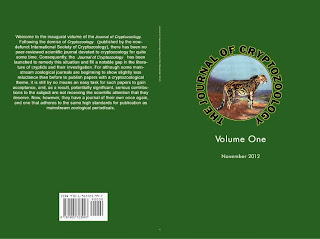 Less than nine months after officially announcing on ShukerNature its founding (click here for details), I am delighted to announce that the inaugural volume of the Journal of Cryptozoology – currently the world's only peer-reviewed, scientific journal devoted to mystery animals – is now in print. Click here to visit its official website for full details of its contents and how to subscribe to this historic periodical, for which I am the editor and CFZ Press is the publisher.

We have a visitor this week. Sheri Myler, a student from the North of England is doing a week's placement with us. She is already very keen on cryptozoology and eager to learn. I confidently predict that she will be an asset to the cryptozoological community in years to come. However, we decided to put her to work, and each day she will be blogging about what she has been doing...

The last day of my placement has been the shortest but, by no means the least eventful. The first of my tasks was to take part in the animal rounds, which, at first, seemed the usual. It was not until we began feeding those in the conservatory that we realised that there was an emergency situation.

One of the fish tanks had been completely drained. The cause of this was not immediately obvious as there were no cracks visible in the glass. The caecilians are amphibious and, so, were in no real danger. The fish, however, were all presumed dead.

On further inspection, it was seen that many of the fish were still moving. A bucket of warm water was fetched and the fish scooped up, largely individually, though as many as possible were moved at a time, to attempt to prevent the time delay causing more deaths. Only a few died before we got there and none seem to have died, from stress, in the transfer.

After alternate tanks were prepared and the rest of the animal rounds completed, I first set to work on my blog, before heading off to retrieve the trail cameras that were set out on my first day. It did not take very long at long and we were back at the centre, checking the photos fairly swiftly.

One of the memory cards was missing, which was a disappointment. The current theory is that someone was doing something they shouldn’t be and, on realising that they’d been caught on camera, took the card with them. The rest of today was spent editing Karl Shuker’s big cat book, before my last day came to a close with the writing of this blog.

Sheri has gone back to Yorkshire. We miss her and hope she comes back to see us in the spring. In the meantime there was a peculiar accident with the caecilian tank yesterday; everything was OK when Graham checked, but when Richard and Sheri went to feed them half an hour later the tank was nearly empty of water. All the fish and all the caecilians, however, were saved. The fish are in a temporary transit tank and the caecilians are in a big plastic box on the kitchen floor. Richard is ill with a cold, and I am getting more and more into the second new Neil Young album of the year, and have also been listening to the mighty Ant-Bee's Electronic Church Muzik which goes very well with late night trippiness.

On this day in 1957 the Levelland UFO case occurred. http://en.wikipedia.org/wiki/Levelland_UFO_Case
And now the news:

A bit early but what the hell, The Card Factory have had their Christmas stuff for sale since August anyway:
http://www.youtube.com/watch?v=GmZg7tvGN9o
Posted by Jon Downes at 12:06 PM No comments: