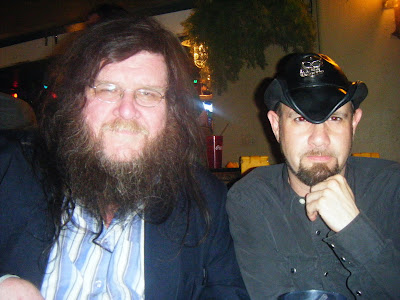 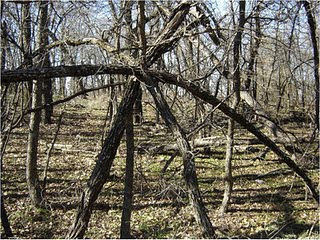 For those who may be interested, a couple of photos from my collection, of so-called "Bigfoot Tepees."


http://nickspicoftheday.blogspot.com/2011/10/bigfoot-teepees.html
Posted by Jon Downes at 11:50 AM No comments: 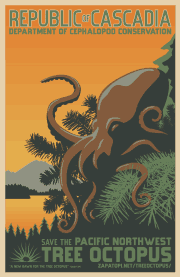 Don't be surprised if inquiries start coming in about tree octopuses and other creatures mentioned at this wonderful site. http://zapatopi.net/treeoctopus/
Posted by Jon Downes at 11:37 AM No comments: 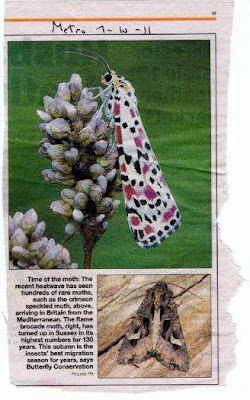 Folks, today I present a story about a fish which predicted the end of World War 1, or at least the inscription on it did. Unfortunately part of the text on the photocopy I have is obscured by a stain which looks either like the head of Jon Downes or a brown parrot depending on your point of view. If you cannot read the caption beneath the fish it reads “ The strange fish caught at Zanzibar. The Arabic ( ?)….tail reads “God alone” 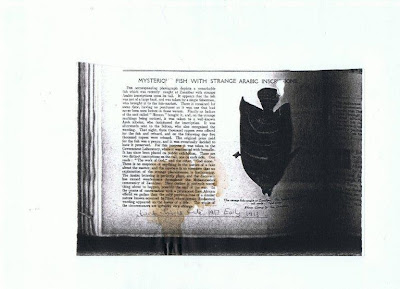 cts a remarkable fish which was recently caught at Zanzibar with strange Arabic inscriptions upon its tail. It appears that the fish was not of a large haul, and was taken by a single fisherman, who brought it to the fish- market. There it remained for some time, having no purchaser as it was one that had never been seen before in those waters. Finally an Indian of the sect “ Memon” bought it, and, on the strange markings being noticed, it was taken to a well known Arab scholar, who deciphered the inscription.It was afterwards sent to the Sultan, who also recognized the wording.

That night, three thousand rupees were offered for the fish and refused, and on the following day five thousand rupees were refused. The original price paid for the fish was a penny, and it was eventually decided to have it preserved. For this purpose it was taken to the Government Laboratory, where it was treated with formalin. It has since been placed on public exhibition. There are two distinct inscriptions on the tail, one on each side. One reads: “ The work of God,” and the other “ God alone.” There is no suspicion of anything in the nature of a fake about the matter, and the mystery is so complete that no explanation of the strange phemomenon is forthcoming. The Arabic lettering is perfectly plain, and the discovery has caused wonderment throughout the Mohammedan community of Zanzibar. They declare it portends some thing about to happen, possibly the end of the war. [ My emphasis. NB the date of publication.]. In the course of conversation with a prominent East African official we gather that the only previous case of a similar nature known occurred in Tibet, where certain Hindustani wording appeared on the leaves of a tree. The whole of the circumstances are certainly very strange. (1)

Until next time, this is Dr Devo signing off.

On this day in 1971 the actor and comedian Sacha Baron Cohen was born. He is best known for hoaxing members of the public while staying in character this can have humorous results, but occasionally will have downright creepy ones like when he started singing an anti-Semitic song in a Texas bar (Baron Cohen is Jewish himself) and nearly everyone in the bar joined in with great enthusiasm.

Sacha Baron Cohen at work as his funniest creation, Borat:
http://www.youtube.com/watch?v=-tR91q59gFo
Posted by Jon Downes at 10:05 AM No comments:

The Frontiers of Zoology blog has just put up the meaty part of the text from a recent CFZ Canada's round-up of reports; this is the close-up examination of one particular report from Manitoba, which, although it is consistently called a "Sasquatch", really sounds like something else and something rather important:

You needn't put up the link to the Cedar-and-Willow blog; just doing the blog regularly makes me happy. (JON: I wouldn't dream of it) It gives my muse a workout. Today's addition does include a reference to Son of Kong:

http://cedar-and-willow.blogspot.com/2011/10/perils-of-paulines-part-7-perils-of.html
Posted by Jon Downes at 10:04 AM No comments: