YER SONG OF THE DAY

I feel very sorry for the late Andy Johns. He was a massively important record producer and engineer, and when he died he could have confidently expected a fair modicum of attention from the press. But yesterday only one death seemed to matter; that of an 87 year old woman. Funny old world, eh? Last night we went out on one of our regular wildlife drives around the Huddisford Wood area and saw a red deer and a badger, both fairly close up. Sheri is still with us, and with a bit of luck and a fair wind we should have Vol 1 of 'Mysterious Creatures' by George Eberhart at the proof stage by the end of the week.

*  Jon Downes, the Editor of all these ventures (and several others) is an old hippy of 53 who - together with his orange cat (who is currently on sick leave in Staffordshire) and a not very small orange kitten (who isn't) puts it all together from a converted potato shed in a tumbledown cottage deep in rural Devon which he shares with various fish, and sometimes a small Indian frog. He is ably assisted by his lovely wife Corinna, his bulldog/boxer Prudence, his elderly mother-in-law, and a motley collection of social malcontents. Plus.. did we mention the orange cats?
Posted by Jon Downes at 12:55 PM No comments: 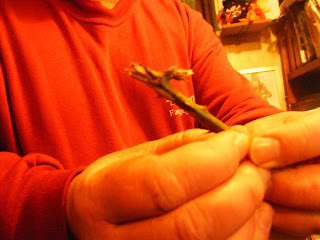 Following on from yesterday's news about Lars Thomas's analysis of the hairs found near South Park, on the outskirts of Woolsery over Easter, we can follow it up with news on the second of the batches of hair samples which Lars took back to Denmark with him. He writes:

"Have just finished (except for one hair) the hairs from Huddisford Wood. 32 hairs altogether - nothing very special-24 dog hairs, 6 badger, 1 rodent of some kind, probably mouse, but to short to be certain of species. That leaves one broken hair, that may be interesting. It is black, broken and rather worn. It's also fairly big. That may be interesting, but that calls for a bit more microscopic power than I have at home right now, so I have to make an appointment at the museum first. Stay tuned!"
Posted by Jon Downes at 12:02 PM 1 comment:

This day was much the same as the previous one. Again I did not do the animal rounds and spent much of the day type-setting the Eberhart book. Today it was “K”, “L” and the beginning of “M”. This was the primary task of the day.

A healthy supplement to this was a drive out to the B&B of a family friend of the CFZ, to see their animals. These included a snowy owl, a harris hawk, three pregnant goats, various finches and two barn owls and two hedgehogs which were still asleep and, so, we didn’t really get to see them. We then stopped by one of the smallest and best maintained churches in the area to have a little look at the renovations.

The cat hunt was again fairly thrilling, though not as much so as the night before last. During a good lengthed drive, around some areas we hadn’t been before on the cat hunts, we saw two animals. We got a good view of a deer running away from us and a very good view of a badger which ran away at first, but then turned around to face us, before hopping out of sight, into the hedge.
Posted by Jon Downes at 12:01 PM No comments:

Yesterday nothing of value was lost.
And now the news:


I personally hope this is what happens at Thatcher's funeral:
http://www.youtube.com/watch?v=0V6N4elMVX4
Posted by Jon Downes at 11:45 AM No comments: