If you are feeling sociable, come and join the CFZ or sign up for our Free Mailing List
Posted by Jon Downes at 1:15 PM No comments:

After hours of messing about which nearly resulted in me reprogramming the computer with a hatchet, the new issue of Gonzo Weekly, in its swish new format, will be out imminently features interviews with Andy Colquhoun and Cyrille Verdeaux, a new video from Auburn, news from Acid Mothers Temple and the Dalai Lama. There are also features on Rocket Scientists, Clepsydra's private show, what happens when The Psychedelic Warlords collaborate with Michael Moorcock and a look at music written by Jews who died in the death camps. and more news, reviews, views, interviews and and London Zoos (OK, no metropolitan menageries, but I got carried away with things that rhymed with OOOOS) than you can shake a stick at. And the best part is IT's ABSOLUTELY FREE!!! We are also relaunching with a brand new layout and format for our 70th issue. We hope that you like it.
www.gonzoweekly.com
Read the last issue here
http://gonzo-multimedia.blogspot.com/2014/03/gonzo-weekly-70.html
The entire contents is: This issue features Damon Albarn
Can, Billy Corgan, Johnny Cash, Miley Cyrus, Paul Whitrow
Badfinger, Missee Jubilee. Galahad. Auburn, Psychedelic Warlords, Pink Fairies, Clepsydra, Rocket Scientists, Erik Norlander, Cyrille Verdeaux, Clearlight, Firefly Faery Fayre and Ball, Paul McCartney, Kate Bush, Fleetwood Mac, Dalai Lama, Neil Nixon, Jill Sinclair
Yes, Trevor Horn, Spirits Burning, Mick Abrahams, Andy Colquhoun, Percy Jones, Rick Wakeman, Daisy Rockwell, Hawkwind, Jon Anderson, James Dean, Beatles, One Direction, James Conlon, Richard Stellar, Michael Sobygge, The Providence, Persona Grata, Revolution Road, Logan's Run, Corvus Corax
PS: If you are already a subscriber but think that you haven't been receiving your copies please check your spam filters. For some reason known only to the Gods of the internet, some e-mail programmes automatically count the magazine as 'spam' probably because it comes from a mass mailer. Either that or they are just jealous of our peerless content
PPS: WARNING: If you are If you are a subscriber using Outlook, Hotmail or Outlook Express, some notifications and previous issues of the magazine may come out with formatting errors.
*  The Gonzo Daily is a two way process. If you have any news or want to write for us, please contact me at  jon@eclipse.co.uk. If you are an artist and want to showcase your work, or even just say hello please write to me at gonzo@cfz.org.uk. Please copy, paste and spread the word about this magazine as widely as possible. We need people to read us in order to grow, and as soon as it is viable we shall be invading more traditional magaziney areas. Join in the fun, spread the word, and maybe if we all chant loud enough we CAN stop it raining. See you tomorrow...

*  Jon Downes, the Editor of all these ventures (and several others) is an old hippy of 54 who - together with an orange kitten named after a song by Frank Zappa puts it all together from a converted potato shed in a tumbledown cottage deep in rural Devon which he shares with various fish, and sometimes a small Indian frog. He is ably assisted by his lovely wife Corinna, his bulldog/boxer Prudence, his elderly mother-in-law, and a motley collection of social malcontents. Plus.. did we mention the orange kitten?
Posted by Jon Downes at 1:02 PM No comments:

Karl, old friend, our thoughts and prayers are with you on this poignant day. 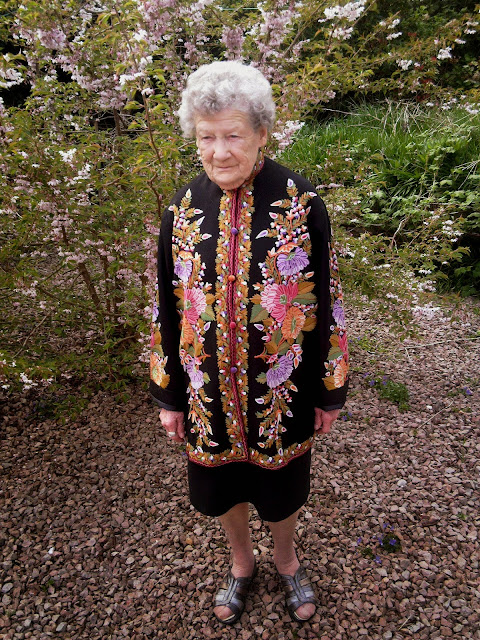 
It was exactly one year ago today that Karl's dear mother, Mary Doreen Shuker, passed away. So today is for him a poignant day of remembrance and reflection over the past 12 months.

Jon,
For tomorrow morning only, could you possibly feature the
website http://www.dhmo.org on your site?

This advertises the horrendous dangers that DiHydrogen MonOxide
(empirical formula H2O) poses to the general public; it is for instance
a major driver of climate change, and has been detected in all samples
of acid rain thus analysed.

It has also been implicated as causing huge agricultural losses, most
recently in Somerset, and the sea water around Britain's coastline very
often fails EU environmental monitors which test for the percentage of
DHMO in the sea water.

Please could you feature this site and spread the word?

On this day in 1957 the BBC broadcast the Spaghetti Tree Harvest Panorama Hoax, which is widely regarded to be the best April Fools hoax ever pulled off. My personal favourite however was the article I wrote on this blog a few years ago about how Jon was actually a character actor named Mimsy Baraclough and that the entire work of the CFZ had been a surreal art project Graham had organized that had got out of hand, and the year we put wings on Helios 7 to get genuine footage of a winged cat was pretty fun too. Old friends of the CFZ may be interested to know that Helios is still going strong and living with my intended in Plymouth where she has adopted our two other cats as her surrogate children.

The spaghetti harvest hoax:
http://www.youtube.com/watch?v=27ugSKW4-QQ
Posted by Jon Downes at 10:01 AM No comments: