"Danger," says the sign on the door of a laboratory at the Australian Museum in Sydney: "Tasmanian Tiger, Trespassers will be eaten!" The joke is that the Tasmanian tiger—a beloved symbol of the island state that appears on its license plate—has been extinct for nearly seven decades. But researchers behind that door are working to bring the animal back to life by cloning it, using DNA extracted from specimens preserved decades ago. Among other things, the work raises questions about the nature of extinction itself.

The Tasmanian tiger’s Latin designation, Thylacinus cynocephalus, or "dog-headed pouched-dog," makes it redundantly clear that the marsupial’s feline nickname is a misnomer. It comes from the dark striping on its back that runs nearly shoulder to tail. The animal had large, powerful jaws, which secured the predator a place atop the local food chain. Females carried their young in backward-facing pouches.
Thylacines, once spread throughout mainland Australia and as far north as New Guinea, were probably outcompeted for food by the dingoes that humans introduced to the area some 4,000 years ago, says Australian Museum director Mike Archer, founder of the cloning project. Eventually, thylacines remained only on the dingo-free island of Tasmania, south of the mainland. But with the arrival of European settlers in the 1800s, the marsupial’s days were numbered. Blamed (often wrongly) for killing livestock, the animals were hunted indiscriminately. The government made thylacines a protected species in 1936, but it was too late; the last specimen reportedly died in captivity the same year.
Read on...
Posted by Jon Downes at 1:42 PM No comments:

JESSICA TAYLOR PROVES THAT THE JOURNAL OF CRYPTOZOOLOGY VOL 2 ACTUALLYEXISTS! 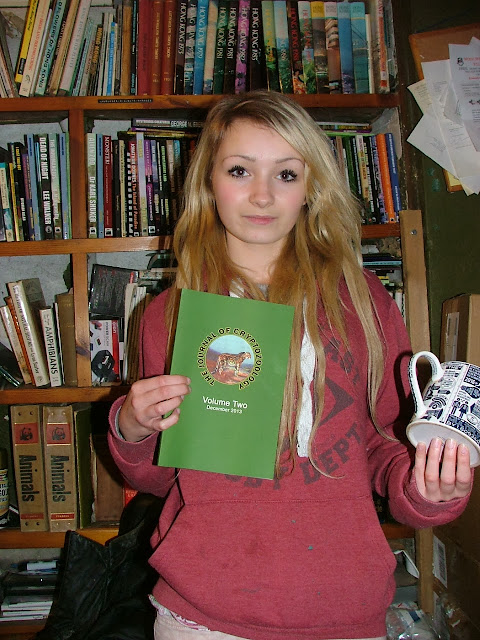 www.gonzomultimedia.co.uk/about.html
Things are beginning to get back to normal. Not only is my broadband working but it is faster than it has ever been. And (although I am probably tempting fate by writing this) it hasn't glitched out once. I went through over a thousand emails yesterday. Please - if you have written to me and are expecting a reply that hasn't arrived - can you re-write? It is quite possible that I deleted something that I shouldn't have done, and I would hate you to think that I did it on purpose.
On another good note. Volume Two of The Journal of Cryptozoology came out yesterday. The European, Japanese and British orders have been dispatched already. The UK ones will be sent out by Naomi West, and have been ordered for her, and the Australian ones will be sent out by Rebecca Lang (ditto). After weeks of highly frustrating (both for me and for everyone who ordered one) faffing about, it is all sorted. Hooray!

*  Jon Downes, the editor of all these ventures (and several others), is an old hippy of 54 who - together with his orange cat (who is currently on sick leave in Staffordshire) and two very small kittens (one of whom is also orange) - puts it all together from a converted potato shed in a tumbledown cottage deep in rural Devon, which he shares with various fish and sometimes a small Indian frog. He is ably assisted by his lovely wife Corinna, his bulldog/boxer Prudence, his elderly mother-in-law and a motley collection of social malcontents. Plus...did we mention the orange cat?
Posted by Jon Downes at 10:27 AM No comments:

On this day in 1970 Garth Ennis was born. Ennis is one of the UK's most well known comic-book writers, having been the second main writer of Judge Dredd and co-creator of Preacher.

Here's the trailer for the recent film adaptation of Dredd (ignore the Stallone one; it didn't happen) :
http://www.youtube.com/watch?v=CbCfqGsXu3M
Posted by Jon Downes at 10:26 AM No comments: