Two contemporary drawings of the Soay sea monster, the first made by the witness Tex Geddes, the second by someone with a vivid imagination 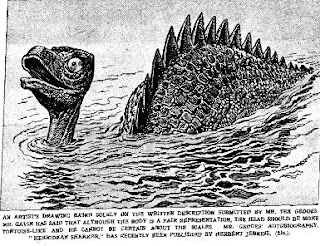 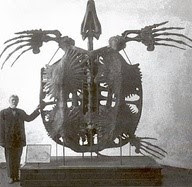 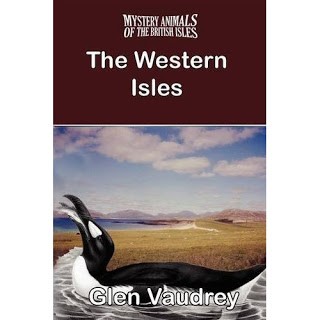 Buy it on Amazon

Posted by Jon Downes at 7:48 PM No comments:

DALE DRINNON: South American wildmen, Benny's Blogs and a visit to the world of Cedar and Willow


UAE releases 93 endangered falcons into the wild i...

THE GONZO BLOG DOO-DAH MAN vs THE MINGO MICE

I need to apologise to Max. Every year when he goes to the Glastonbury Festival he telephones me afterwards and tells me all about it. Because last weekend was the Solstice Festival in Wales, I assumed it was also Glastonbury. I have been sulking all week because I hadn't heard from him.

Yesterday I looked for YouTube footage of The Rolling Stones at Glastonbury, and not finding any I jumped to the conclusion that the all powerful Rolling Stones organisation had quashed such things, a bit like the Led Zeppelin organisation did after the 02 gig six years ago. I had even got half way through an article about Corporate Big Brother in the music business. I was waxing lyrical on my themes.
Then, last night my dear nieflings Dave B-P and Jess H came round. In passing Dave said that he was planning to spend this evening (Saturday) watching The Rolling Stones and Primal Scream on the BBC coverage of Glastonbury Festival. I had got may dates wrong and my proverbial knickers in a twist over nothing. Glastonbury Festival is, of course, this weekend, and I am an idiot. But then again, everyone else knows both of those things anyway. I am now gonna sit and lick my wounds and listen to Marianne Faithfull.

*  Jon Downes, the Editor of all these ventures (and several others) is an old hippy of 53 who - together with his orange cat (who is currently on sick leave in Staffordshire) and two very small kittens (one of whom is also orange) puts it all together from a converted potato shed in a tumbledown cottage deep in rural Devon which he shares with various fish, and sometimes a small Indian frog. He is ably assisted by his lovely wife Corinna, his bulldog/boxer Prudence, his elderly mother-in-law, and a motley collection of social malcontents. Plus.. did we mention the orange cat?
Posted by Jon Downes at 3:00 PM No comments:

ANDREW MAY: Return of the cryptoturd 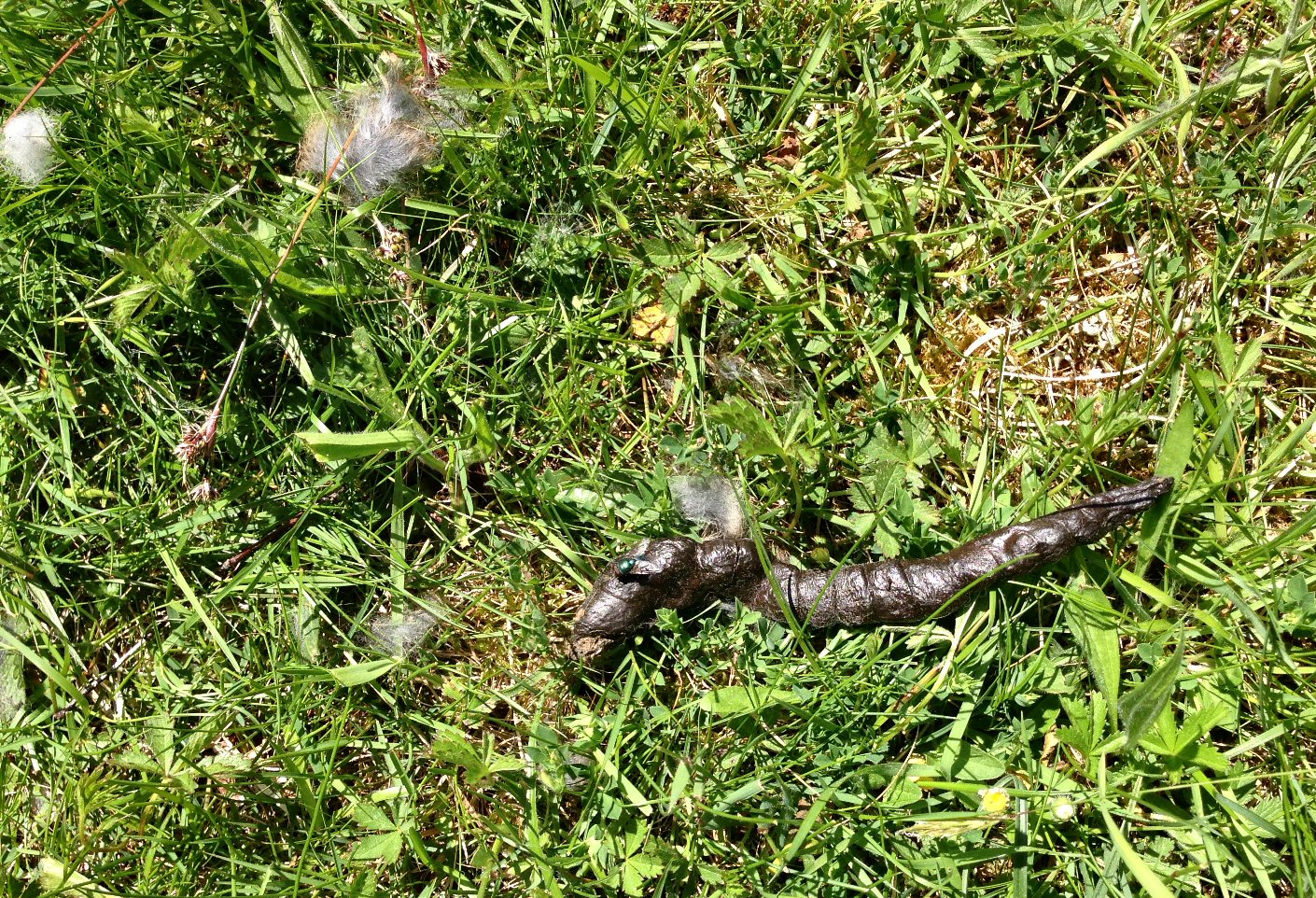 The two-days-per-week job I'm doing at the moment means I can go for a lunchtime walk round the Winfrith nature reserve, where I saw the mysterious "cryptozoological turd" a few years ago (Animals & Men issue 47 page 72). I saw something similar yesterday, in almost the identical location (photo attached). It was similar in size and had the same regular striations, but this one appeared to be fresher (less dried out). I would say that it's fairly clearly a fox dropping, particularly with the distinctive pinched end. What do you think? The scat was surrounded by downy feathers (a few of which are visible in the photo), which again is suggestive of a fox. So if this one is a fox, then the previous one probably was too.

Another question -- is there a way of distinguishing at a glance between a newt and a baby lizard? Both species are supposed to be common in that area, but usually when you see them it's only for a fraction of a second as they scuttle under cover. Is there anything about time of year, location, colouring, way of moving etc that would allow you to tell from a momentary glimpse whether it's a newt or a small lizard?

Andrew
Posted by Jon Downes at 2:42 PM No comments:

30.
is home to one of the most famous of cryptids out there, the world famous Nessie, also known as the Loch Ness Monster.

However, we are going to stay on land for this mystery animal; we are going to look at one of those out of place big cats. While there have been plenty of sightings made over the years on the Scottish mainland it is perhaps even more surprising to learn that they have also taken place on some of ’s smaller islands with sightings of large black cats being recorded on the isle of as far back as the 1970s and right up to recent times. Mull is an island that at its closest point to the mainland of is still a 15 minute ferry trip so how a big cat could have made the journey undetected is a mystery. But that’s not the only island to have a big cat sighting for there have been others on islands even more remote from the mainland. In 1999 there was a sighting of a dark brown cat the size of a collie on the very small (8x3 miles) and remote (over 2 hours on a ferry from the mainland) that must be among the strangest sightings. The creature was spotted by a couple out walking who came within 50 yards of this larger than normal cat; after watching it for twenty seconds until it disappeared over a stone dyke and into the ferns. The couple made enquires locally but nobody could explain the sighting.

Of course the sightings on Mull and Colonsay are just a couple of the reports of strange creatures recorded in The Mystery Animals of the : The Western Isles.
Starting soon you will be able to tune in and hear about the mystery animals of on BBC Radio , the Morton Through Midnight show will play host to Morton's Mystery Creatures, a regular feature where I will be looking at ’s mystery creatures.
Next stop is a trip south of the border to .

The Spiky yellow woodlouse (Pseudolaureola atlantica) occurs nowhere else. Recent surveys indicate that there are less than 50 individuals left at a single cloud forest location. © Ed Thorpe
Bugs on the brink - Conserving St Helena's invertebratesJune 2013. Wildlife charity, Buglife - The Invertebrate Conservation Trust, has launched a 3-year ‘Bugs on the Brink' project, on the UK Overseas Territory of St Helena. Many of St Helena's unique invertebrates are on the brink of extinction, with some of its most iconic species, such as the Giant earwig, feared lost within living memory. Funded by the Darwin Initiative, the project will help to conserve St Helena's globally threatened invertebrates. This is the first time that anyone has set out to create a long-term plan for conserving St Helena's invertebrates.400 endemic invertebratesSt Helena is one of the UK's ‘Overseas Territories', lying in the South Atlantic Ocean, mid-way between Africa and South America. It is one of the most remote inhabited islands in the world and, for now, can only be reached by boat. The island's flora and fauna evolved in extreme isolation, resulting in more than 400 invertebrate species found nowhere else on Earth. For this reason, St Helena has been called the ‘Galapagos of the South Atlantic'.ExtinctionsUnfortunately, following its discovery by sailors in 1502, St Helena suffered immense environmental destruction, caused by introduced livestock and forest clearance. Today, much of the island's unique wildlife is threatened with extinction. Iconic invertebrates such as the Giant earwig (Labidura herculeana), Giant ground beetle (Aplothorax burchelli) and St Helena darter (a dragonfly - Sympetrum dilatatum) are believed lost within living memory. The remnants of the native flora and fauna are struggling to survive in habitat fragments, which occupy a tiny fraction of their original area. They also face a wide range of pressures from non-native plants and animals.

Ha Ha that was funny. Sidesplitting. Yes. Ha! Now for the news...

And now for a happy tune that you can whistle while you work: