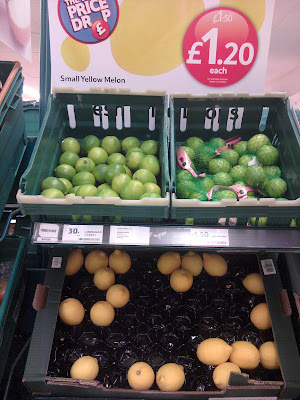 Lemons or melons?
Posted by Jon Downes at 10:18 PM No comments:

First up is a new, but rather sketchy sighting of a 'panther' in the Midlands:

I have to admit that I don't really like Facebook much. I know that in this day and age that is pretty much an admission of apostasy, but I don't.

We have had a couple of Facebook Groups for years, but I have never really understood how they worked, and I am afraid that I paid very little attention to them.

However, this afternoon Matthew and Emma came over and dragged me kicking and screaming into the 21st Century.

They have taken over the moribund CFZ Big Cat Study Group Facebook Page and already it looks really rather swish, and there is a jolly discussion going on about Mystery Cats in Weardale.

They also showed me how to set up a Facebook Page for the Weird Weekend and I would be very grateful if you guys could go en masse and click the 'like' button, to make us look massively popular.

Until this afternoon the CFZ Publishing Group page which is meant to cover all of our various publishing endeavours, had been up for months and only had two members. It now has over 200, and a series of lively conversations are going on.

So maybe I have been a hidebound old git all these months. Don't all speak at once...

PS: The Main CFZ Facebook Page is here.
Posted by Jon Downes at 8:07 PM No comments:

On this day in 1923 English astronomer and Games Master Patrick Moore was born.

It’d be way too predictable to pop out a clip of ‘The Sky at Night’ wouldn’t it:

New on Frontiers of Zoology, Winding up the series on Bunyips:
http://frontiersofzoology.blogspot.com/2012/03/tusked-bunyips-and-southern-walruses.html

New on Frontiers of Anthropology:
http://frontiers-of-anthropology.blogspot.com/2012/03/roots-of-american-r1-y-dna.html

New on Cedar and Willow:
http://cedar-and-willow.blogspot.com/2012/03/cedar-as-christine-mcintyre-website.html

http://cedar-and-willow.blogspot.com/2012/03/bettie-page-queen-of-nile.html
Posted by Jon Downes at 10:56 AM No comments:

CRIPTOZOOLOGIA EN ESPAÑA: CFZ are up for an a

II Kraken Awards (CFZ is a candidate for the International Award)

http://criptozoologos.blogspot.com/2012/03/ii-premios-kraken.html
Posted by Jon Downes at 5:09 AM No comments:

BIG CAT NEWS: Near accident in the Midlands, Scottish prints and more

Big cat on the prowl in Corpach?
Lochaber News
"I suppose a big dog could have been responsible but they look more like a very big cat's prints to me. "I found the prints just below my living room window, directly beneath a bird feeder. "The front two impressions were more deeply embedded in the ...

Unfortunately there are no close up pictures of the prints, so we can't really comment. Next up is a link to a story about Derbyshire 'panthers'. For various reasons not unconnected to Ronan's book about the Holy Grail, I am up aan ungodly hour, and the link is currently not working. I will leave it in just in case they repair it on the morrow.

Readers recall cat encounters
Derbyshire Times
THEY may still be considered as nothing more than a myth by many - but according to some Derbyshire Times readers, big cat sightings are a common occurrence in our county. In response to an article published last month on Derbyshire big cats, ...

And finally from the UK today, a story about a near RTA involving a 'panther' in the West Midlands...

Coventry panther close to being killed on Ryton road
Coventry Telegraph
A woman has told the Telegraph how a motorist had to swerve to avoid the big cat in Oxford Road, Ryton-on-Dunsmore, late at night. She said a large black creature came from a dense group of trees in the middle of a roundabout by the former site of the ...

OK, this column is about British mystery cats, but it is goodto note that CFZ Press author Scott Marlowe is currently hunting a mystery cat in Florida.


The Search For The Mystery Carrabelle Cat
WJHG-TVPanama City- A team of popular cryptozoologists are searching the Florida panhandle this weekend for a mystery cat. After several sightings in Carrabelle, city commissioners invited the team to search for the cat. The team, comprised of Scott Marlowe, ...

And finally, back in the UK, it may not be a mystery cat, but it is a disturbing story about a spate of cat deaths in Cheshire...

Mystery cat deaths
From This Is Cheshire
By MATTHEW HOBBS
PET owners in Orford are devastated after four cats on one street died in less than a week.

Posted by Jon Downes at 4:37 AM No comments: