The following two letters appeared in the Manchester City News on January 23rd 1883 and January 31st 1883:

A Dutch gentleman, who many years ago had the office of Inspector of Prisons in Holland, informed me the other week that “spiders sing” on the following authority:- Questioning a prisoner who could not sleep at night if he did not find it wearisome lying awake, he was answered, “ I should if it were not for the singing of my spiders.”

“Singing! Spiders don`t sing!” ejaculated the inspector, with some doubts of the man`s sanity. “Oh yes,they do,” said the prisoner; listen!” He did listen, and in the stillness could distinctly hear harmonious sounds proceeding from the said spiders; faint,but, as he said, “clear and harmonious!” I have watched beautiful garden spiders at work, but not in silence so profound as to hear them “singing”. Perhaps some of your naturalistic friends may be wiser, or be tempted to observe for themselves.

With reference to Mrs Linnaeus* Banks`s note on the so-called Singing Spiders, I think that the sounds in question may have been produced by one of the species belonging to the family Theridiodae, and probably by the species known as Steatoda bi-punctata (Linn.). The male of this species, like others of the same family, produces a creaking sound by the rubbing together of two horny plates on the thorax and body, but it can hardly be called a song, although a species has been described from North America which produces a sound compared to “the purring of a cat”. The sound (which is produced only by the males) is supposed to serve to call the females, and is mentioned by Mr Darwin in his Descent of Man as being the first instance he has met with in the ascending scale in which a sound is emitted for that purpose. The species I have mentioned is of frequent occurrence in this country, as well as in Holland and on the Continent in general. The garden spider, Ep. Diademata, does not produce any sounds.

The last Peak District wallaby just got knocked over by a car half an hour ago.
Or was that sound a shot?
Because it`s lying here at my feet,
still and warm.
A wallaby sandwich? Perhaps I`ll talk to the Snowgoose (*2) about it.
Otherwise, what a pointless end to the seventy year tale of the Roaches wallabies.

*1 Since writing this poem I have read on a web site that a wallaby was seen in 2011.

http://hauntedskies.blogspot.com/2012/07/haunted-skies-update-on-volume-6.html
Posted by Jon Downes at 10:04 AM No comments:

http://cryptozoologynews.blogspot.com/
On this day in 1969 Apollo 11 splashed down in the Pacific ocean.
And now the news:

Take it away, Frank:
http://www.youtube.com/watch?v=kYXdcR0Xbag
Posted by Jon Downes at 10:04 AM No comments:

Another gloriously sunny day here in Woolsery. I have no doubt that the weather will change imminently and that by the time of the Weird Weekend next month it will be peeing down again. But for the mopment the weather is absolutely glorious, and as we speak Graham is on the roof trying to fix the latest batch of leaks. Bizarrely, the bits of the house that were built in 1800 are reasonably good - its the bits built in the 1970s that are falling apart!

But enough of my bellyaching. On with the bloggystuff:

Yesterday I did a completely unsolicited plug for the latest issue of UFO Matrix magazine (which is really rather good and is available electronically from all the best outlets), but I would hate you to think that I only do plugs for magazines of which I am the editor. Here, (just to prove that) is the latest issue of Prog magazine with our very own Jon Anderson on the cover. Not a mention of me or little green men in sight.
http://gonzo-multimedia.blogspot.co.uk/2012/07/jon-anderson-in-new-edition-of-prog-mag.html

I have met some very funny people in my life - "both funny ha-ha, and funny peculiar" as my dear old Mama would have said. I think that Peter McAdam is probably one of the funniest. But in which category? Aaaaaaaaaaah, that would be telling. But his new book is massively entertaining.
http://gonzo-multimedia.blogspot.co.uk/2012/07/peter-mcadam-interview.html

The music induistry is still stunned from the death of Jon Lord last week. He was always my favourite prog keybvoard player, and to my mind, did the funkiest rock/classical crossovers of anyone in the genre. His playing on songs like 'Burn' from 1974 still completely amaze. Here old friends like Rick Wakeman pay tribute to him for a BBC show...
http://gonzo-multimedia.blogspot.co.uk/2012/07/the-last-word-on-jon-lord.html

It shows my age, but in the same way as I always think of Ron Wood as being 'the new boy' in The Rolling Stones, I always think of 'Going for the One' as being one of Yes' later albums. The fact that it is 35 years old this week, just does my head in completely. So, to mark the three and a half decades since its release, here is a link to a tribute that I wish I'd thought of writing myself.
http://gonzo-multimedia.blogspot.co.uk/2012/07/link-yes-going-for-one-turns-35.html

I have just finished reading an interesting (if disturbing) book about EMI records, and one of the most disturbing things in it (for me, personally) was the fact that whereas when the author wrote about the company back in the 60s and 70s (and even before) the artists he mentioned were people that I cared about, or at least knew who they were, but that most of the artists in the last fifteen years, either I didn't care about at all or didn't even know at all, and I have always thought of myself as a reasonably hip music biz auter. So it is a great relief to come back to The Gonzo Daily as I write about Michael Des Barres, an artist about whom both Corinna and I do care a lot.
http://gonzo-multimedia.blogspot.co.uk/2012/07/carnaby-street-sees-return-of-rock-and.html

Erik Norlander's star is in the ascendant. He is a very talented musician and composer, and a bloody nice guy as well. It is always a pleasure to bring you foreign review, especially when they are as nice as this one.
http://gonzo-multimedia.blogspot.co.uk/2012/07/erik-norlander-review-galactic.html

So, back to the drawing board and see ya tomorrow..
Posted by Jon Downes at 10:04 AM No comments:

Next up on Cedar and Willow, a sort of grand historical overview leading up to The Hulk:http://cedar-and-willow.blogspot.com/2012/07/the-heritage-of-hulk.html

This has the whole of the movie Hercules starring Steve Reeves, several cartoon clips and the end links go on to several others (I believe you can get The Twelve Tasks of Asterix by following the links at the end of the video clips), two or three theme songs in case anybody feels like a sing-along and an autographed photo of Lou Ferrigno as the Hulk. All for nothing but the time you might have free.
Posted by Jon Downes at 9:30 AM No comments:

IN WHICH I VOLUNTARILY BLOW MY OWN TRUMPET 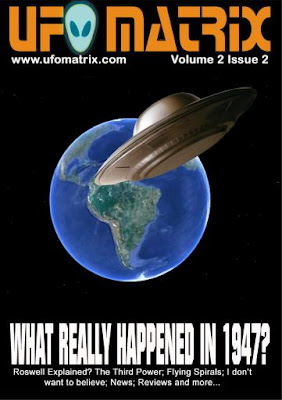 I hope that you will forgive me shamelessly plugging something of my own, but amongst the other things that I do, I am the editor of this rather fine UFO magazine. I was brought in a few months ago to mastermind the relaunch, and my first edition is now on sale through those jolly nice people at MagCloner. I am, actually rather proud of it!

UFO MATRIX is not just a magazine about UFOs, it is also a magazine about the wider implications of UFO Culture. It examines the history and the mystery of the subject in depth, bringing on board the cream of the world's UFOlogical and Fortean researchers.

Issue Eight brings a new and chilling aspect to the Roswell mythos, an examination of one of Scotland's best known abduction cases, a little known facet of the Betty and Barney Hill case, a look at the truly unsettling aliens created by H.P.Lovecraft, and columists including representatives of BUFORA and MUFON (UK).

Editor Jon Downes has been a central figure of British paranormal and Fortean research for several decades, and is one of the best known British researchers and authors in the field. Contributors to issue 8 include veteran researchers such as Nick Redfern, Richard Freeman, Malcolm Robinson, Stanton Freiedman, and exclusive content from John Hanson and Dawn Holloway of the Haunted Skies Project.

At last a valid UFOlogical magazine for the 21st Century.

Following on from yesterday's story about deformed bumble bees our very own Robert Schneck has come up with an answer. He writes:

Bumble bees often have mites and they are less likely to be responsible for the deformed wings than Deformed wing virus (DWV), a disease that began appearing among bumble bees a few years ago. There is a paper about it in the Journal of Invertebrate Pathology.

Abstract
Honey bees (Apis mellifera) productively infected with Deformed wing virus (DWV) through Varroa destructor (V. destructor) during pupal stages develop into adults showing wing and other morphological deformities. Here, we report for the first time the occurrence of bumble bees (Bombus terrestris, Bombus pascuorum) exhibiting wing deformities resembling those seen in clinically DWV-infected honey bees. Using specific RT-PCR protocols for the detection of DWV followed by sequencing of the PCR products we could demonstrate that the bumble bees were indeed infected with DWV. Since such deformed bumble bees are not viable DWV infection may pose a serious threat to bumble bee populations.
Posted by Jon Downes at 9:05 AM No comments: